Email ThisBlogThis!Share to TwitterShare to FacebookShare to Pinterest
at 12:39 PM Posted by Randy @ WCG Comics 0 comments

Email ThisBlogThis!Share to TwitterShare to FacebookShare to Pinterest
at 6:39 PM Posted by Randy @ WCG Comics 0 comments

REVIEWS: Capsule Reviews in the Time of Coronavirus (11)


SPOILER ALERT: If you haven’t seen Spider-Man: No Way Home, you may wish to skip the following review: 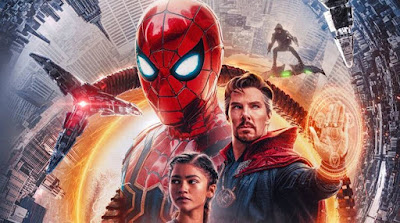 The latest entry into the Marvel cinematic universe, Spider-Man: No Way Home, is another home run for the MCU juggernaut. Like some of the most iconic classic Marvel comics, the film features a fun crossover with another character (Dr. Strange, also teeing up that character’s forthcoming 2022 film) and, even more significantly, expands the “multi-verse” first seen, in all places, in the groundbreaking animated film, Spider-Man: Into the Spider-Verse.

While the return of super-villains from the Spider-Man films pre-dating Tom Holland like Alfred Molina as Dr. Octopus and Willem Dafoe as Green Goblin was not a big secret, less clear was whether the other cinematic Peter Parkers/Spider-Mans—Tobey Maguire and Andrew Garfield—would appear. The extent of their roles in the film was clearly tightly kept under wraps until the movie’s release—Garfield was especially coy about whether he was in the film, even advising people to be prepared for disappointment.

Both actors not only appear and play major roles in the film, but, amazingly, even have their own moving journeys and story arcs within the film. Having not even ever watched the Garfield films, I must say I was nevertheless surprised at how moved and emotional I was to see all three actors and characters on screen together. As I half-joked on social media, it warmed and tickled my inner fanboy.

The film also cleverly re-sets the character. While I’ve never been knowledgeable or immersed enough in comic-book continuity to have an opinion on the translation of the comics to film—and always been willing to take the films at face value—apparently there was some complaint that the character of Spider-Man had been taken a little too far from its outsider, loner roots by making him be essentially a Tony Stark protogé and arguably be the new heart of the series with the exits of Iron Man and Captain America. With this film, due to the consequences of the multi-verse colliding with each other, Peter Parker/Spider-Man once again finds himself on his own and starting over with a blank slate, back to being “Your Friendly Neighborhood Spider-Man.” How this will play out in the future in the next phase of films leaves Marvel with plenty of options moving forward. 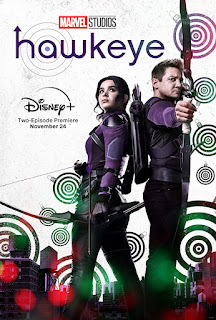 Shortly after the release of Spider-Man: No Way Home, the Marvel Disney+ series Hawkeye was released. While I enjoyed the other Marvel series well enough, and appreciated their part in continuing to expand the mythology Marvel has built, many of them left me cold and seemed too drawn out as they progressed.

That said, I found Hawkeye to be the most enjoyable of the bunch. This may partly because I was familiar with the original source material on which much of the series is clearly based, a run launched in 2012 by writer Matt Fraction and artist David Aja. Many of the comic-book story elements are there, such as the “Bro Tracksuit Mafia” and the distinct production design of the comic-book.

The series juggles several parallel storylines culminating with the surprise and delightful appearance of Black Widow’s sister, Yelena, played by Florence Pugh. Recently introduced in the Black Widow flashback film starring Scarlett Johanssan, Pugh nearly steals the show with her cameo as she nearly did  film (her appearance here was actually hinted at in the post-credits scene of Black Widow).

A number of elements elevated the series—the incredible chemistry of the leads (Jeremy Rinner, Halee Steinfeld and Pugh); the strength of the source material; the successful juggling of multiple characters and story arcs; the appearance of Vincent D’Onofrio as Kingpin (crossing over from the Daredevil Netflix series),* and the Christmas setting. And the series deftly and satisfyingly wraps it all up at the end with a bow on top, ending with a hilarious yet stirring mid-end-credits song and dance sequence from the faux Broadway musical seen in the first episode called, “Rogers: The Musical,” with music by music composer Marc Shaiman (who is seen during the sequence conducting the orchestra). It was truly a great end-of-year holiday treat courtesy of Marvel Studios.

Marvel continues its roll of expanding its universe, even finding great success on C-list characters, which I think has been one of the strengths of the projects.

* The Netflix Daredevil also entered the Marvel Studios film universe when the show’s Daredevil actor, Charlie Cox, made a brief cameo in Spider-Man: No Way Home, as his secret identify, attorney Matt Murdock. 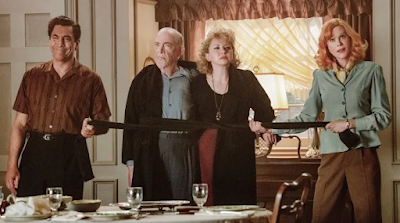 While getting mixed reviews, I found this film better than expected—writer/director Aaron Sorkin takes a week of production on the iconic I Love Lucy television show and uses it as an opportunity to explore and magnify the complex relationship of its leads and creative stars, Desi Arnez and Lucille Ball, centering on a moment when Ball was accused of being a Communist.

Arnez (played by Javier Bardem) is particularly shown to be a smart savvy business person and creative comedian; Lucy (Nicole Kidman) is his comedic and artistic match, but unwilling to put up with her husband’s philandering, though pains are taken to show that he nevertheless loved and respected her.

I felt Arnez and Kidman successfully inhabited their roles, making you forget you’re watching Kidman and Bardem; the supporting cast is also good. While all were terrific, actor J.K. Simmons, playing William Frawley, is particularly outstanding, as usual. At first you’re led to believe he’s a one-note character, particularly given the well known enmity between Frawley and his co-star, Vivian Vance, but the character ends up being a source of support and wisdom to Ball and is equally hilarious in re-creating the scenes from the show. Perhaps the biggest drawback is that Ball, particularly, is so ingrained into popular cultural memory that finding anyone able to fill that role—even someone as talented as respected as Kidman—is a losing battle.

While there were some “Sorkinisms” in the show (with limited walk-and-talk), it concludes with plenty of heart.

Below is a promotional video (my first ever!) for Rob Hanes Adventures #23—followed by static images of the preview pages! Features modern-day piracy on the high seas! 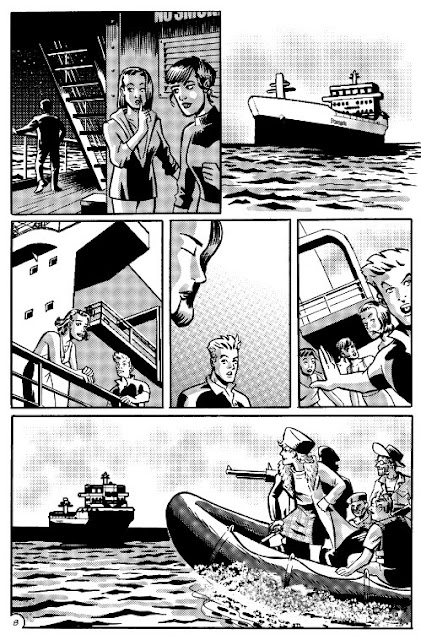 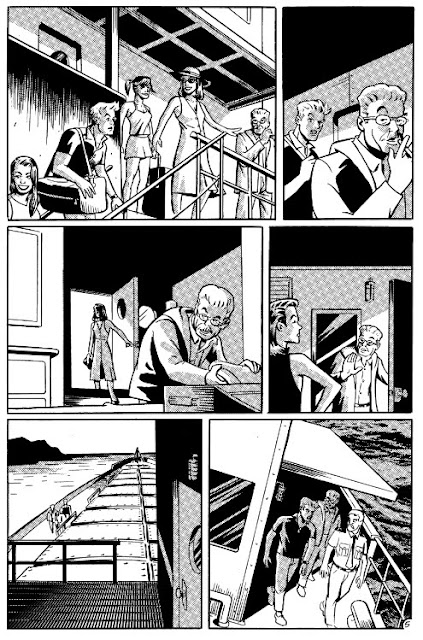 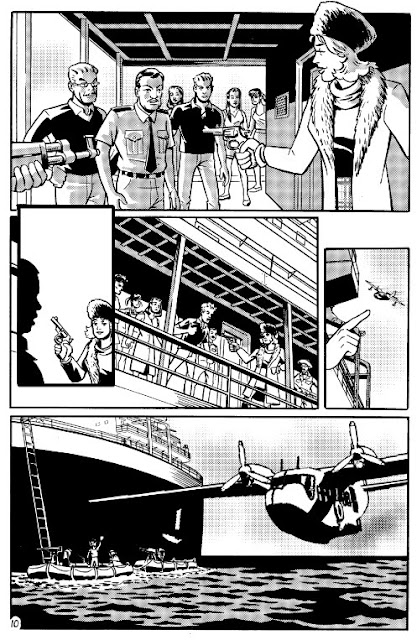 Entertainment Round Up 2021: The Year of Binging 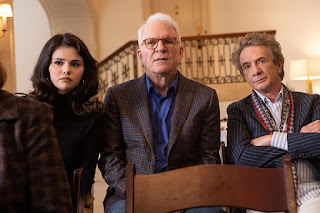 In last year’s Entertainment Round Up, I wondered whether I’d be able to maintain the pace of entertainment consumption that had picked up during the pandemic—well, here we are a year later, and while things have opened up a bit, who’d’ve thought we’d all still be holed at home to remain safe and healthy.

So, yes, as you’ll see from the list below, where I annually list the tv shows, movies and books I’ve consumed at the end of the year this list is indeed longer than past years. While I always make the caveat that I don’t necessarily catch everything, this year nevertheless is longer and more complete than previous entries. On the plus side, most of these were consumed while at the drawing board (I have a tv in my studio space!), so at least I was productive while channel surfing.

I also often like to list those movies and tv shows that were my favorite—though, admittedly, I don’t watch anywhere near every release. Of course, I also watched and revisited films and programs I’ve seen before, which are tagged with a “rewatch.”

That said, here are the programs that made the pandemic bearable—and given that this was a year when most of us were stuck at home for long periods of time, it was pretty much all about the binging. None all of these necessarily first aired in 2021, but they were when I discovered or watched for the first time this year:

For All Mankind (Apple+)

As for films, I understandably didn't get out to the theater much, though of course many films were made available either simultaneously or shortly after its official release on streaming channels. In any case, among the most memorable were those that tickled my fanboy heart, particularly Spider-Man: No Way Home, Black Widow, and Ghostbusters: After Watch.
I also ended the year on a tear through several books, all good and worthwhile, particularly Lone Rider: The First British Woman to Motorcycle Around the World by Elspeth Beard and A Very Punchable Face by Colin Jost. But there wasn't a bad one in the bunch (otherwise, I wouldn't have finished reading them!)
And so without any further ado...
Streaming Films 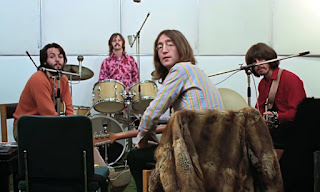 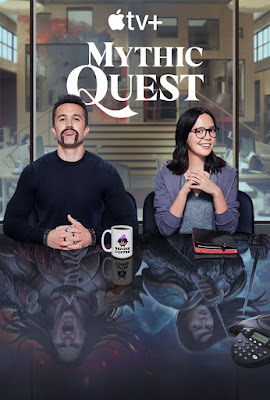 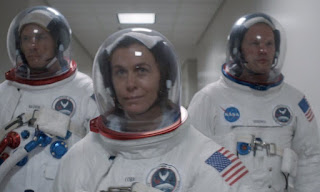 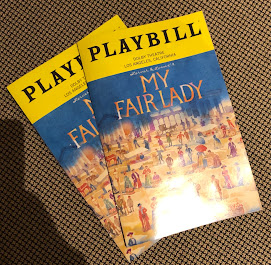 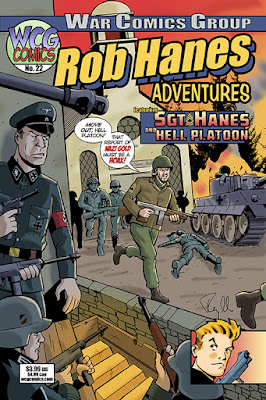 Rob Hanes Adventures #22 is now available for purchase at our online store.