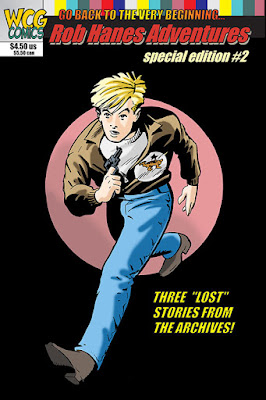 Issue 2 of Rob Hanes Adventures: Special Edition will be released in July 2016 and feature three never-released early adventures from the series dating from the late 1980s! The story will be published under the WCG Comics imprint.

“The three stories in the issue were among the first I completed for print,” said Rob Hanes Adventures creator and writer-artist Randy Reynaldo. “As a result, since it was my earliest effort, the stories are much more tentative and cartoony than my current work. It obviously took awhile to find my voice and style.”

Nevertheless, several indy publishers from the era found the work refreshing, responding positively to the stories and expressing interest in the series. One company even formally announced the first issue but went out of business before the issue could be published. Reynaldo subsequently began self-publishing the series as a zine under the WCG Comics imprint but shelved these earlier stories since he felt by then that the quality of his work had significantly improved and the stories were no longer representative of his work. (One can still see traces of this earlier style in the Rob Hanes Archives trade paperback that compiled the early self-published zine stories.)

Over the years, Reynaldo has received requests to release these stories and is now pleased to make them available through this companion title, separate from the regular series. The three stories in the volume include the introductory “Rob Hanes,” “Loyalties,” and “Koman!”

Reynaldo notes that the stories do for the most part fit into the series’ continuity, though they are no longer considered "canon"—indeed, they show his earliest adventures as a private eye for Justice International and explain his reassignment to the Middle East. But some of the supporting characters that appear in these earliest stories are slightly different than how they would later appear in the series.

About Rob Hanes Adventures:
Inspired by classic adventure comic strips like Milton Caniff's Terry and the Pirates and Roy Crane's Buz Sawyer but set in the modern day — with dashes of light-hearted humor reminiscent of Will Eisner's Spirit — readers and fans have lauded Rob Hanes Adventures for recapturing the spirit of the classic adventure strip while updating it for modern day audiences.

Though themes and characters recur in the series, every issue of Rob Hanes Adventures is self-contained. The entire series remains in print, including 15 issues to date and two trade paperback collections of earlier work. For more information about the series, previews and to purchase back issues, visit the WCG Comics website at wcgcomics.com or facebook.com/rhadventures.
at 7:00 AM Posted by Randy @ WCG Comics 0 comments

Review: Washington's Circle: The Creation of the President 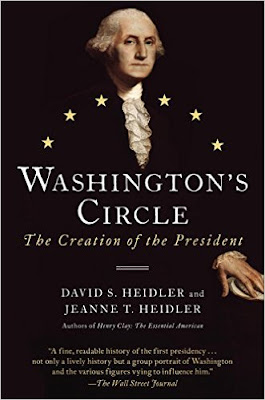 Similar to Doris Kearns Goodwin’s seminal Team of Rivals (which I reviewed here), Washington’s Circle: The Creation of the President by David S. Heidler and Jeanne T. Heidler looks at George Washington’s two terms as the nation’s first president through the lens of the “team of rivals” he built around him to support his presidency.

As the book sets up, the new American experiment following the American Revolution was a fragile and volatile exercise. Recognizing that the nation’s first constitution, the Articles of Confederation (fully ratified in 1791), was toothless, vague and ineffective, a new Constitutional Convention was called in 1787, leading to the creation of the present-day Constitution that outlined the national frame of the government that we know today.

After the Congressional ratification of the document, elections were held, leading to Washington’s election as the nation’s first president. It’s important to note that Washington had already retired to private life and needed some persuading to return to public service. Even then, great political fissures were already emerging and it was agreed on all sides that Washington’s leadership and reputation were needed to bring unity and stability, and ensure the survival of the new republic. Washington (and his wife Martha), bound by duty, reluctantly agreed to leave his beloved Mount Vernon and move to New York, then the nation’s capital. (During his presidency, the capital was re-located to Philadelphia, with plans to permanently re-locate it to a new site to be designated “Washington.”)

Kearns Goodwins’ Team of Rivals describes the uber-qualified team of Cabinet members, advisors and support staff Lincoln gathered around himself—but compare this to Washington’s circle, consisting of illustrious names that remain familiar to most students of history and became future presidents themselves. The brilliance of these men also underscores the new nation’s great fortune in having such a convergence of thinkers and talent at its very beginnings.

These people, of course, include people like Thomas Jefferson, who served as Secretary of State for the first term-and-a-half of Washington’s presidency; John Adams, the prickly Vice President who right away saw the irrelevance of the position, though Washington came to value him more in his second term; James "Jemmy" Madison, a member of Congress, who also was Washington’s first most trusted advisor (Madison in those first few years was actually entrusted with writing both Washington’s early state of the union addresses, as well as Congress’s response; and Washington’s response back); James Monroe; and Henry Knox. Lesser names like Edmund Randolph (a close friend who would have perhaps the most tragic break with Washington), John Jay, Gouverneur Morris, and Tobias Lear also play important roles. As the authors point out, some of these people, like Knox, would have been considered brilliant men in their own right had they not had the poor timing to contend with the brilliance and legacy of peers like Jefferson.

First among equals, however, in Washington’s circle was the ambitious and self-made Alexander Hamilton, the nation’s first Treasury of the Secretary.

Hamilton’s influence and legacy cannot be overstated. Through his vision, Hamilton fought tooth and nail to put the U.S. on solid financial footing, partly through the establishment of the Bank of the United States, which he believed was imperative to the future success and growth of the country. Reading about the complex ways Hamilton managed the country’s finances and debt shows how sophisticated and opaque the financial markets were even at that time—something that remains virtually unchanged today, as the role of the financial market in the 2007-08 financial meltdown showed, as well as more recent concerns over the influence of the so-called one-percenters. Though Madison was initially one of Washington’s most trusted advisors as well as his ears and eyes in Congress, Hamilton would soon supplant him, exerting such an influence that some felt unseemly.

Having said that, Hamilton also often acted ruthlessly—as well as underhandedly if not outright unethically—to achieve his aims, sometimes just short of treason. For instance, in order to curry favor with the British whose trade and friendship Hamilton believed was essential to the country, he provided information to the British legation, often undermining Washington and Jefferson, who, as Secretary of State, was supposed to handle foreign relations. While Washington valued receiving advice from all members of the Cabinet regardless of the topic, Hamilton’s maneuverings as well as his control of the purse strings allowed him to wield a lot of influence and authority. (Yet Hamilton's intentions remained unassailable—his enemies in Congress pursued several investigations but ultimately found nothing to prove he had personally benefited from any of his activities.)

As such, it was inevitable that fissures would emerge. In fact, these fissures resulted in the country’s two-party system, which reflects the tension between state rights versus federal authority that today remains an integral part of U.S. politics and discourse. On the one side were the Federalists—led by Hamilton—who believed in a strong central government and that the people should allow their representatives to govern as they saw best; it was a somewhat patriarchal (some would argue patronizing) view of government which allowed those being governed to make their feelings known at election time.

On the other side were the Republicans—led by Jefferson and Madison—who feared a strong central government and the direct involvement of citizens in governing. This fear was somewhat understandable since the country had just emerged from colonial, monarchic rule. While no one (at least rarely) ever questioned Washington’s motives, there was nevertheless a real fear of the executive branch assuming sovereign power.

As much as Washington was truly revered even in his lifetime, it says much about the era—and the unchanged nature of politics—that even he was not immune from attacks in the press or from Congress. While Washington was known for his self-control and ability to remain above the fray and reproach, he was nevertheless severely hurt, angered, and wearied by the attacks.

It seems partly because of this—and his belief that Congress needlessly meddled in what fell within his executive powers—that seemed to push Washington himself into the Federalist camp, much to the exasperation of those on the other side of the aisle. (Even then, Congress was a much maligned body, as it is today.) 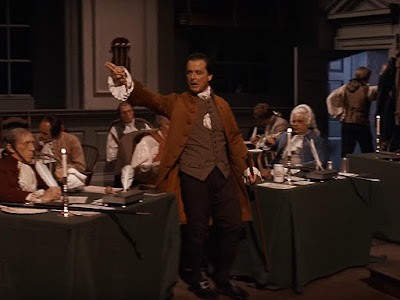 Even in these formative years, the Constitution was constantly being tested and opinions from advisors and the bench were sought to determine whether certain actions or decisions were Constitutional.

It says much about what the Constitutional framers had established—and their commitment to following the rule of law—that despite the fights over interpretation and ideology, the Constitution stood firm and would withstand the test of time.

Regardless, Washington for the most part was able to remain true to himself and managed to steer the country onto firmer ground. And his actions and example set the precedent for all who were to follow as president. As mentioned above, although nobody ever seriously believed Washington’s motives to be anything but pure, many nevertheless believed he could have justifiably held the presidency for life, if he wished. So it was a shock to many (including those overseas who were watching the American experiment from afar) when Washington announced his decision to not pursue a third term. It was an easy decision for Washington to step away from the fray so that he could return to private life and Mount Vernon; nevertheless, the decision to voluntarily step down from the nation’s most powerful office in order to allow for a peaceful and orderly transfer of power to a new chief executive, as outlined in the Constitution, remains one of the most enduring and meaningful legacies of our first president.
at 3:35 PM Posted by Randy @ WCG Comics 0 comments