Comics at the Skirball 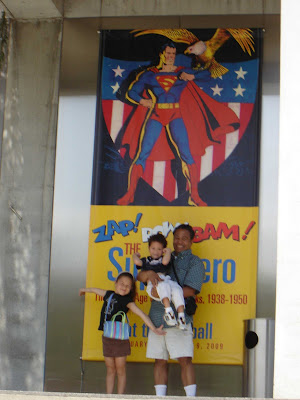 Though the role that Jews have played in the formation of the comic-book industry has been well documented, there has been a plethora of fresh scholarship on the subject. In just 2008, these include From Krakow to Krypton: Jews and Comic Books, Disguised as Clark Kent: Jews, Comics, and the Creation of the Superhero, and Jews and American Comics: An Illustrated History of an American Art Form. (I reviewed a similar book, Men of Tomorrow, here.) These books have been driven, no doubt, by the increasing prominence of comics—particularly in mainstream entertainment—and the fact that the first and second generation of cartoonists, editors and publishers who worked in the industry are disappearing.

As part of this resurgence of interest in the subject, the Skirball Cultural Center in Los Angeles is running an exhibition called "ZAP! POW! BAM! The Superhero: The Golden Age of Comic Books, 1938–1950" through August 9.

Anyone with an interest in comics and, particularly early comic books, will enjoy the exhibition. While the show focuses on the contributions of Jewish writers and artists to comic books, any story about the early days of the industry is inseparable from the Jewish experience—like movies, comic books in the beginning were not a "respectable" business and, hence, the only industry open for Jews to enter. 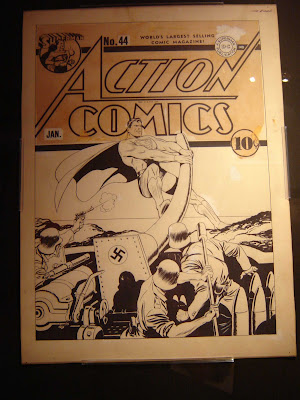 Anyone with some knowledge about comic-book history will be on familiar terrain in this show: people like Jerry Siegel, Joe Shuster, Jack Kirby, Will Eisner, Stan Lee, Bill Finger, Bob Kane, Otto Binder, etc., are all profiled here.

The exhibition is especially well stocked with original comic-book pages, and includes a few kid-friendly touches. (The original art to the iconic Superman image that accompanies this blog is included in the exhibit.) The show also is paired together with a related exhibition called "Lights, Camera, Action: Comic Book Heroes of Film," which also runs through August 9.

The show was curated by Jerry Robinson, who is well qualified to mount such a show. A respected comics historian, ambassador, and advocate for cartoonists' rights, Robinson is himself a first-generation comic-book artist: Robinson began as a "ghost" for Batman co-creator Bob Kane and is generally credited (along with often uncredited Batman co-creator Bill Finger) for creating the iconic Batman villain, the Joker. (As recounted in Men of Tomorrow, Robinson was also instrumental in finally getting DC Comics and Warner Brothers in the 1970s to properly credit Jerry Siegel and Joe Shuster for creating Superman and getting them and their families a small annual recompense.)

Located just one exit north of the Getty Center in Brentwood/Los Angeles off of the 405 freeway, I highly recommend a visit to the Skirball for this exhibit, as well as for its outstanding reputation as a Jewish cultural center that hosts movie screenings, cultural events, and exhibitions about Jewish history and the Jewish experience from earliest times to the present day. If you have children, the Center also has a permanent "Noah's Ark" exhibition geared towards families and children. The museum itself is free, but reservations and paid entry is required for "Noah's Ark." Visit the Skirball website for details. 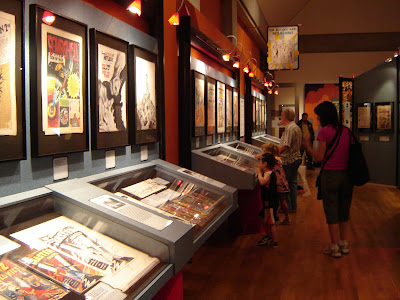 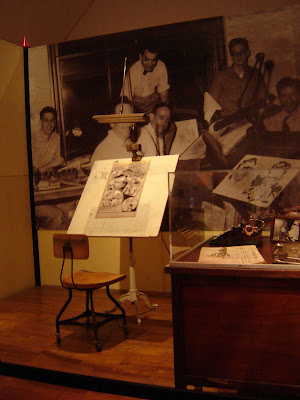 Email ThisBlogThis!Share to TwitterShare to FacebookShare to Pinterest
I recently finished reading the full-length biography of cartoonist Charles Schulz, creator of Peanuts. Below is a review of the biography, as well as the first volume of a projected reprinting of the strip in its entirety.

Schulz and Peanuts
by David Michaelis 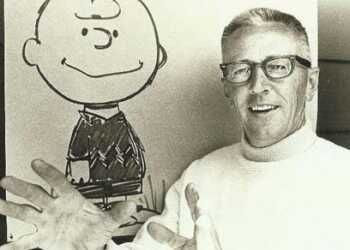 When Schulz, the recent biography of cartoonist Charles Schulz by David Michaelis, was released in 2007, members of the family were reportedly upset by the portrait of the famed Peanuts creator.

As I read it, I certainly could understand why. Schulz came from conservative German and Scandanavian stock who had settled in Minnesota, a region famed for its reserve and reticence. No doubt seeing the family's dirty laundry with past hurts, judgments and resentments aired for all to see must have been quite a upsetting.

The main complaints, however, focused on the book's portrayal of Schulz as dark, melancholy and often emotionally distant at the expense of his legacy and their happy memories of him. 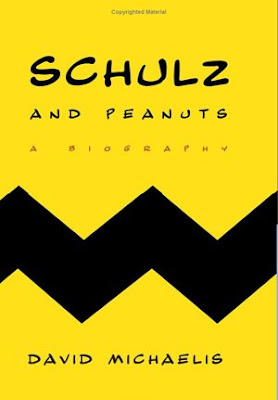 Schulz clearly is an attempt to construct a psychological portrait of the cartoonist. In this regard, Michaelis has done his homework, drawing extensively from the unfettered direct access he had to family, friends and the artist's private papers, as well as to archived interviews in print and on film, and, of course, the artist's legacy of work.

Throughout the book, Michaelis tries to draw a direct connection between the cartoonist's personal life and private turmoils, and show how it was reflected in his work. While there's always a danger of overreaching in such an approach (and Michaelis perhaps does so occasionally), Michaelis convincingly portrays Schulz's inner life and how it clearly manifested in his work, often not very subtly.

It's important to note that Schulz himself at various times often referred to himself as hapless, a "nobody," a "loser," etc., forever tying him in the public's eye with his strip's main character, Charlie Brown. Of course, some of this was shrewd marketing—Schulz no doubt played up the resemblance to promote the strip, by allowing readers to identify Charlie Brown as Schulz's cartoon doppelganger. In later years, Schulz would occasionally bristle at this comparison—the truth, of course, was much more complex.

To a large extent, Schulz did seem to be solitary and somewhat disenfranchised well into adulthood. Sensitive and artistic, he rarely received the kind of encouragement and attention he craved from his parents who, by upbringing and culture, were reserved and not given to either verbal or physical displays of affection. Similarly, with a few exceptions, his extended family was not the type to encourage ambition or achievement beyond simply being able to provide for a wife and child; indeed, the family seemed to discourage such aspirations, lest they lead to disappointment. On top of this, Schulz's mother suffered her last few years in excruciating pain, dying from cancer, which the family tried its best to completely shield the young Schulz from despite the obvious. She died while he was away, shortly after he had joined the army during World War II, a devastating event that seemed to affect Schulz for the rest of his life, if for no other reason that he never had a chance to ever get her unconditional love and support, nor prove his worth to her.

Most revealingly, much of Schulz's childhood resentments and pain seemed partly of his own making. For example, though Schulz the adult often spoke about being bullied as a child, none of his childhood friends remember that. In fact, though they acknowledge that Schulz and themselves were outsiders who were not part of the "in" crowd at school, they recall Schulz occasionally being their ringleader, of being fairly cocky in his athletic abilities (particularly hockey and baseball), and even flashes of his being a bit cruel himself.

The book makes clear that Schulz was born with an innate burning ambition and a strong sense that he would make something of himself. I suspect that without any real encouragement from his parents or strong adult role models for himself—and perhaps out of guilt for his feelings of superiority—he repressed those feelings to a degree and let them stew. This combination of competitiveness and resentment (he seemed to never forget a slight), and the determination to exact "revenge" through success, drove the incredibly shy Schulz (who in later years realized his shyness was a form of narcissm and ego) to make his way to the top of the cartooning profession.

To the very end, Schulz was the quintessential tortured artist—never sure of his worth, or trusting of the fame and acclaim he earned, but always supremely confident and protective of his talent and the strip he created. But in his later years he also became more comfortable in his own skin, and found in his second marriage the unconditional love and support he always had wanted.

The Complete Peanuts, Volume I: The Fifties (1950-52)
by Charles Schulz (Fantagraphics Books) 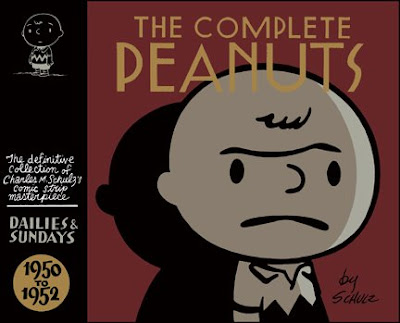 The Schulz biography also let me look at Peanuts with fresh eyes. It had been years since I last read the strip in the paper; though I never felt it had declined in quality in any discernible manner, it certainly became something that I took for granted and was so familiar, it just floated off my radar.

I read it as a child and, in fact, my first memories of trying to cartoon was doing my own 4-year-old version of Peanuts (no doubt inspired both by the animated specials and the pocket paperback compilations that were so popular in the 1960s). So, of course, the beauty and poetry of the writing, matched by the simple yet perfect comic timing of the cartoons, went over my head. (Terry and the Pirates creator Milton Caniff, his eye always on what was commercial, noted on more than one occasion in his later years that if he were to start a new strip, it would be something like Peanuts.) The strip hit a nerve because it was an examination of the human condition disguised as a kid strip. Schulz's strip was truly innovative and completely changed the face of comics.

In 2006, prior to the release of the biography discussed above, Fantagraphics—a comics publisher known for its indie sensibility and often accused of an "elitist" view of comics—released the first volume of a projected comprehensive reprinting of the series in its entirety. (Fantagraphics founder and publisher Gary Groth likely set the stage for this arrangement by conducting one of the lengthiest and most comprehensive introspective interviews with the cartoonist, which appeared in Fantagraphics' flagship critical magazine, the Comics Journal, in 1997.)

This is a review of the first volume, which I picked up shortly after its release.

In retrospect, one must give credit to Schulz for continuing to evolve the series throughout its run. While many lesser cartoonists have coasted once they found success, Schulz clearly remained devoted and engaged. The popularity of Snoopy perhaps came closest to completely overtaking the strip. (Schulz is one of the few cartoonists to be the only artist to work on his strip and to never use an assistant—Calvin and Hobbes' Bill Watterson was another.)

Nevertheless, while the strip was already well formed and had a distinct voice at its founding, Schulz would not hit his stride until later. As such, in this first volume, Snoopy doesn't "talk" yet and the loud and bombastic Lucy—additions to the strip that would take the strip to new levels—are not yet in place.

Perhaps most striking is the fact that Charlie Brown himself isn't yet the hapless loser that became one of the strip's hallmarks. As this first volume shows, Charlie Brown is actually quite mischievous! As mentioned above, the change would come later, primarily with the introduction of Lucy, whose strong personality became the catalyst that defined the rest of the characters of the strip.
at 9:29 PM Posted by Randy @ WCG Comics 3 comments