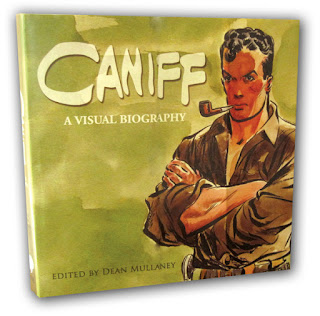 Over the past decade, there has been an explosion of upscale art books and deluxe reprint collections devoted to comics and cartoonists, with great care given to the quality and presentation of the projects. These have included full compilations of work like Terry and the Pirates (IDW), the Spirit (DC Archives), Peanuts (Fantagraphics), Dick Tracy (Fantagraphics), as well as high end coffee table books like Scorchy Smith and the Art of Noel Sickles and the first volume of a projected three-part project, Genius Isolated: The Life and Art of Alex Toth, both from IDW.

Milton Caniff, the creator-writer-artist of the groundbreaking Terry and the Pirates and, later, Steve Canyon, has been one of the major beneficiaries of this effort to document the legacies of comics and their creators. Two new additions to the growing Caniff canon are the hardcover oversized coffee table art book Caniff from IDW (360 pages) by Dean Mullaney and a hardcover deluxe collection of Steve Canyon: The Complete Series Volume 1 from Hermes Press (208 pages). Given the attention Caniff has received over the years—including a 952-page biography in 2007 and numerous collections of his work by multiple publishers over the years since the 1980s—one would think that much of this work had been exhausted by now. But these two new projects present extensive work not reprinted before.


Caniff
Though the coffee table book, Caniff, covers well trodden ground, much of it features never before seen material, culled mostly from the Ohio State University Billy Ireland Cartoon Library and Museum where the artist’s papers officially reside. (Caniff was an active and prominent Ohio State alum and essentially started the Library by donating all his art and papers to the institution after his death.) Indeed, author Mullaney concedes that the book grew out of the discovery during the course of routine research that there was a treasure trove of rarely seen material by Caniff that fans deserved to see. 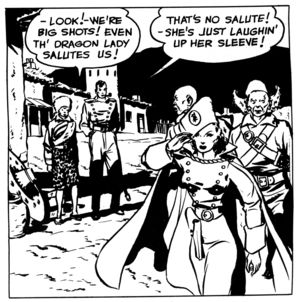 In addition to being an outstanding writer and storyteller, Caniff’s legacy is based on introducing—along with best friend and studio-mate Noel Sickles—a whole new approach to cartooning that relied on an impressionistic use of black and white to achieve a sense of realism never before seen in comics. It led to a whole new school of cartooning that continues to influence artists today, including myself.

As a result, since Caniff is most identified for working in this signature style during the bulk of his career from 1934 until his death in 1984, it’s a real revelation to see the artist’s versatility featured in this book.

This versatility is rooted in the fact that Caniff considered himself a newspaperman first, starting out in the artists’ bullpen of the Columbus Dispatch and, later, the Associated Press, when cartoonists also doubled as draftsmen, photo retouchers, mapmakers, commercial illustrators, etc. At a time when photographers hadn’t yet begun to replace artist on newspaper staffs, newspaper cartoonists like Caniff were journeyman craftsmen, ready to whip out logos, mastheads, crossword puzzles, story illustrations, and the like on a tight deadline.

Caniff’s work in these areas—which include portraitures of all the presidential candidates from the 1932 presidential election, watercolors, ghost drawing, spot illustrations, and even custom designs for military units and air force bombers—are all beautifully displayed and reproduced. Many promotional pieces for his strips and work produced gratis for the U.S. military and military men are also well represented and provide a fuller picture of the artist’s abilities than have been previously seen before. Another revelation of this volume is Caniff's bold color work, particularly in his Sunday strips, which really made the work pop off the page. 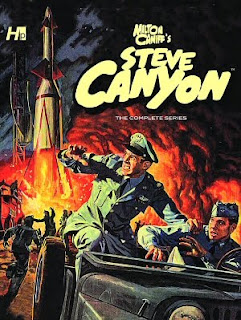 This handsome hardcover book, Steve Canyon: The Complete Series Volume 1, is the first ever reprinting of some of the licensed comic-book adaptations of the series from the 1950s, originally published by Dell's Four Color Comics series. It needs to be said up front that while Caniff apparently had a hand in the production of the comic-book series, his actual direct involvement was fairly minimal.

That said, as a rule, such comic-book adaptations from the period are more often than not poor quality, but when I first picked up the book to decide whether to buy it, I was pleasantly surprised by the art—while not as sharp as Caniff’s, it was still competently done. This was partly due to Caniff’s personal participation and quality control—though the artist didn’t have the time to draw the comic-book stories himself, he hired William Overgard, who had worked as his assistant and briefly ghosted the strip when Caniff was ill, to draw it. To create some continuity, Caniff apparently inked the face of Canyon himself in the stories. (Overgard went on to work on the comic strip series, Steve Roper and Mike Nomad.)

The stories are relatively straightforward, simplistic action affairs, obviously geared to a juvenile comic-book  audience than the adult newspaper readers Caniff specifically targeted in the syndicated Steve Canyon. The dialogue has none of the panache or style that distinguished the regular strip, nor is the character development anywhere near as sophisticated.

Nevertheless, it’s fun to see this alternative take on the character. Along with the recent DVD release of the Steve Canyon television series, this collection is perhaps more of a curiosity than a serious contribution to Caniff’s legacy that underscores the extent of Caniff’s success and influence in media outside of the comics pages in his heyday.
at 9:52 PM Posted by Randy @ WCG Comics 0 comments