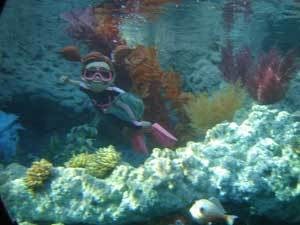 Hope everyone had a wonderful holiday season and Christmas!

Though I don't plan to make it an annual tradition, for the second year in a row, my family spent part of the holidays at Disneyland. Since it worked so well last year, we followed the same gameplan: spent Xmas morn opening presents and having a nice family breakfast; moseyed our way to Anaheim and checked into our hotel later that day on Christmas afternoon; entered Disneyland as soon as it opened; back to the hotel during the mid-afternoon to recuperate and give the kids a chance to nap; then back to the park until closing. We stayed a second night then, after a good breakfast, headed home the next day.

Our first stop was the newly re-furbished submarine/Nemo ride. Seemingly along with everyone else entering the park that morning, Nemo was our first planned destination; when the park officially opened, all of the attendants simply directed everyone to the line. While I was concerned about the wait, we waited less than an hour.

Fittingly, my 6-year old daughter rode the most rides. Last year, she was just tall enough to go on most of the rides at Disneyland and got a taste by riding the Matterhorn and Star Tours (twice). This year she went full tilt, riding the Matterhorn (twice), Space Mountain, Star Tours, and Thunder Road Mountain (also twice). My wife and I (and my brother, who accompanied us), switched off on watching my 2-year-old son while the other went on rides with my daughter. And of course, we hit numerous other rides together, such as Casey's Train, It's a Small World, and ToonTown. 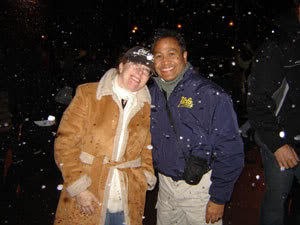 Perhaps because of the cold weather, we were surprised at how much the park emptied that evening—late that evening, we were getting on most of the marquee rides like Pirates of the Caribbean and the Haunted House, with literally no wait!

We even caught the noontime Star Wars show, where kids are plucked from the audience to get Jedi training then face off against Darth Vader. (As I jokingly intoned in my best Vader impersonation—"Has it come to this? Two shows daily and three times on weekends?")

All in all, another tremendous Christmas at the Magic Kingdom.

Photo above right: Darla the Fish Killer on the new Finding Nemo Submarine Ride; above left: Though the evening fireworks show was cancelled, it didn't stop the snow flurry finale.
at 7:45 PM Posted by Randy @ WCG Comics 0 comments

Email ThisBlogThis!Share to TwitterShare to FacebookShare to Pinterest
Best wishes from WCG Comics for a happy holiday season filled with peace and harmony! 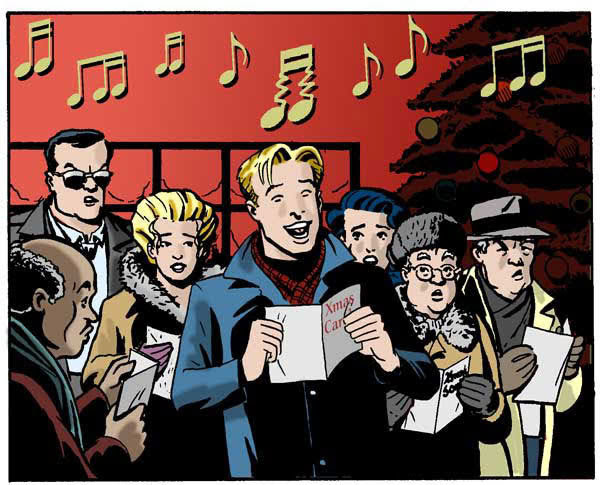 To see the above image full size click here. To see a collection of holiday cards from years past, click here.
at 9:53 PM Posted by Randy @ WCG Comics 0 comments