This past weekend, I had the chance to catch a touring production of the musical, “1776” (music and lyrics by Sherman Edwards and a book by Peter Stone). I caught it with a bunch of college buddies—for some reason, in college, along with other pop culture touchstones like Monty Python and the Holy Grail, we bonded over our shared love for this musical (in both an ironic and unironic fashion), often quoting (and singing) many of the lines and songs by heart, I guess because it was a unique fusion of musical theatre and U.S. history. As my wife pointed out to one of my friends in this group, it’s our Rocky Horror Picture Show.

I first discovered the musical as a teen in the early or mid-1970s. But I don’t think I saw it until a bit later—a childhood friend went to see it and loved it, and somehow I ended up recording the cast album onto a cassette tape that I played many times. So I knew the music before I ever saw the film or play.

I once before saw the play on stage in a fine production at UCLA (not a student production but by a professional revival company). I believe this production featured Orson Bean as Benjamin Franklin. What I recall was a performance of the song, “Molasses to Rum” which brought the house down. I previously had found the song to be a bit boring, but this was a perfect example of a performer giving the song fresh impact and meaning live.

The film adaptation of “1776,” released in 1972, does have a cult following though it’s not universally or critically admired. To be candid, the film does at times feel a bit flat and by the time of its release, the age of the film musical had passed and the naturalistic quality of the film sometimes feels at odds with the trappings and conventions of a musical. On the other hand, it has the advantage of featuring much of the original Broadway cast, particularly William Daniels as John Adams, who is so closely linked to the role, it’s a challenge to anyone following in his footsteps. As such, the film preserves the legacy of the play and much of the original Broadway cast.

As I said, this was a fine production. The voices of all the actors were great and the lead, Andy Umberger, as John Adams, certainly took his cue from Daniels and turns in a fine performance—I wasn’t so sure in the first opening scenes of the show, but his performance and stage presence grew on me as the show went on and while it’s certainly reminiscent of Daniels (which, of course, is also as it was written), he still made it his own. It’s hard to single anyone else out because everyone was excellent across the board. Watching the show and the political debates made me appreciate even more how well written the play is. And the show successfully nails all the comedy beats, humanizing the characters and lightening the drama. Just like today, regional differences—particularly on issues of slavery and the differing interests of the landed gentry versus industry—threatened the unity of the proceedings and nearly derailed the vote for independence, requiring at times very painful compromise. So even though we know the outcome, the suspense is all in the getting there. 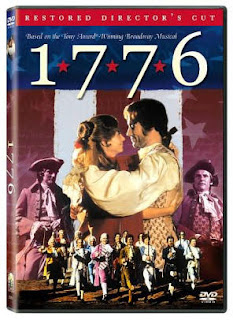 The musical—centered around the vote for independence on July 4, 1776—has an interesting, political history in itself. One of the songs, “Cool, Cool Considerate Men,” sung by the rich landowners in Congress who were committed to protecting their financial interests and slavery—is a paean to Conservatism, with lyrics like, “Come ye cool cool conservative men” and “To the right, ever to the right/Never to the left, forever to the right.” The show was performed at the White House and President Nixon not only asked for that song not to be performed but lobbied studio head Jack Warner, a friend, to cut it from the film. Warner not only complied but demanded that the negative of the number be destroyed. Fortunately, someone at the studio for whatever reason did not do so, so when the film was restored, the negative was found and restored to the film as part of the official director’s cut (to the filmmakers’ delight).

In any case, it was a terrific production and I would recommend seeing a live production of it if you ever have the chance, particularly if you like the film. 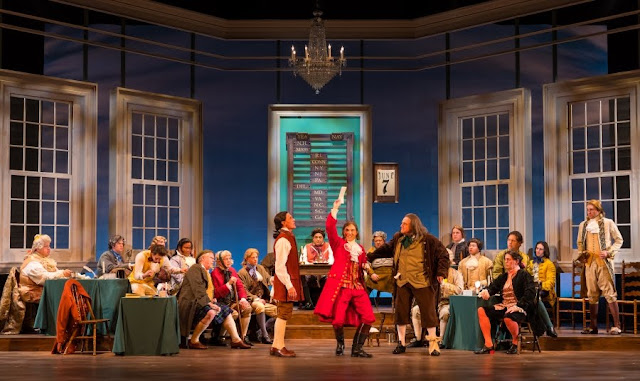