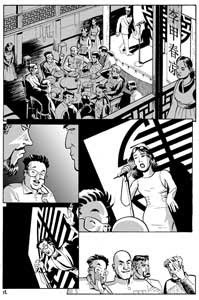 I recently posted some new pages from the upcoming next issue of Rob Hanes Adventures (issue 11)— another action-packed yarn ripped from today's headlines! The release date will be announced shortly (likely at the San Diego Comic-Con).

In the story, Rob goes to China to help crack down on pirated and counterfeit goods and, as usual, gets more than he bargained for.

Look out for "Rob Hanes and the Pirates" in Rob Hanes Adventures #11, coming soon!
at 9:56 PM Posted by Randy @ WCG Comics 1 comments

Email ThisBlogThis!Share to TwitterShare to FacebookShare to Pinterest
When I was a kid, my parents bought my brother and me a portable record player. I believe it was a Christmas gift, sometime in the late ‘60s. To make sure we had something to play on it when we opened this present, they also purchased a bunch of 45 records. For the most part, I’m sure they picked the records at random, but there were a treasure trove of classics that I imprinted on that probably explains my rather eclectic taste in music.

These included novelty songs like “Winchester Cathedral” and “Little Blue Man,” as well as singles by the Troggs, Doris Day, Andy Williams, and Petula Clark (“Downtown”).

Also included among these records was Louis Prima and Keely Smith’s “Old Black Magic.” Prima’s catalog has experienced a deserved resurgence in recent years, as has Smith, who is actively recording and performing again—her Swing, Swing, Swing CD (2000) is on my frequent playlist. Unlike some singers, her voice has remained virtually unchanged over time, as shown in her appearance in this year’s Grammy’s, where she reprised “Black Magic” with Kid Rock.

Smith has an incredibly pure, strong and sultry voice, and on-stage she projected a deadpan, could-care-less attitude though she frequently broke character—undoubtedly as a wink to the audience—in response to Prima’s antics.

So without further ado, here are two great clips of Keely (and Prima) in their prime—"Old Black Magic" and "All Night Long."

The Art of Roy Crane

I've just posted an article paying tribute to Roy Crane, one of my favorite cartoonists of all time, at my WCG Comics website here. Since I have a few other articles posted here about other cartoonists and the adventure strip, I thought I'd post it there for posterity.

Crane is the creator of Wash Tubbs and Buz Sawyer, and served as a bridge between the early "big foot" days of cartooning and the modern adventure strip which came into its own in the 1930s. He successfully blended a "cartoony" style with a strong black-and-white/semi-photorealistic rendering style (aided by his masterful use of Craftint paper as shown in the sample above). Though not as well remembered by some of his stylistic proteges and admirers, which include the likes of people like Alex Toth and Milton Caniff, many cartoonists recognize him as one of the greats, a true "artist's artist."
at 9:35 PM Posted by Randy @ WCG Comics 1 comments

I Can Get Behind That

Email ThisBlogThis!Share to TwitterShare to FacebookShare to Pinterest
Let me say up front that I’m not a fan of Star Trek or Boston Legal (or, for that matter, T.J. Hooker). I make this disclosure to show I have no particular fanboy disposition for William Shatner.

With this mind, one of my favorite albums of the past few years has been William Shatner’s “Has Been.” Produced by Ben Folds (whose extended "Whatever and Ever Amen" also is another favorite of mine), “Has Been” is a brilliant CD that’s by turn funny and moving. While it contains some of Shatner’s trademark “beat poetry” approach to song-writing and singing, it nevertheless blew me away and has become one of my all-time favorite CDs. In addition to Folds, Joe Jackson, Aimee Mann, Henry Rollins, Brad Paisley, and Adrian Belew lend their talents.

Below is a live performance of the CD’s lead track, “Common People,” with Joe Jackson, from the Tonight Show.