“With these issues, I feel the series really hit its stride,” said series creator and writer-artist Randy Reynaldo. “There’s drama, straight adventure, some comedy, and even a drawing room murder mystery, taking place in diverse locales such as Russia, the Alps, a British manor, and Africa.”

Reynaldo is an invited Special Guest at the 2018 San Diego Comic-Con.

Launched in 2000, and preceded by a zine and a 4-issue comic-book run titled Adventure Strip Digest, Rob Hanes Adventures is one of the longest-running indie comics series still going! Inspired by classic adventure comic strips like Milton Caniff's Terry and the Pirates and Roy Crane's Buz Sawyer but set in the modern day—with dashes of light-hearted humor reminiscent of Will Eisner's Spirit—readers and fans have praised Rob Hanes Adventures for recapturing the spirit of the classic adventure strip and updating it for modern day audiences.

For more information about the series, previews and to purchase back issues, visit wcgcomics.com or facebook.com/rhadventures.

For some sample images from the collection scroll down or to view the full gallery of sample pages, click here. 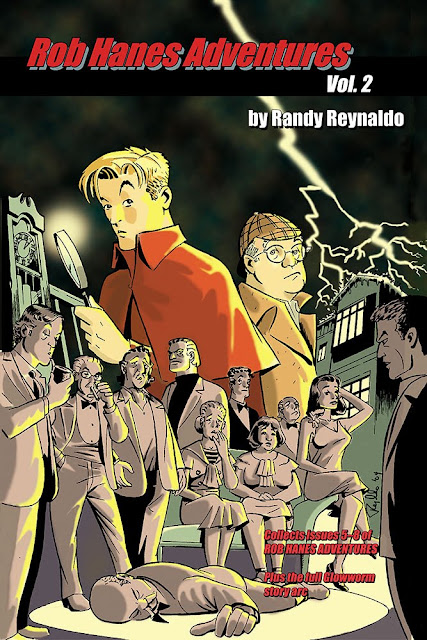 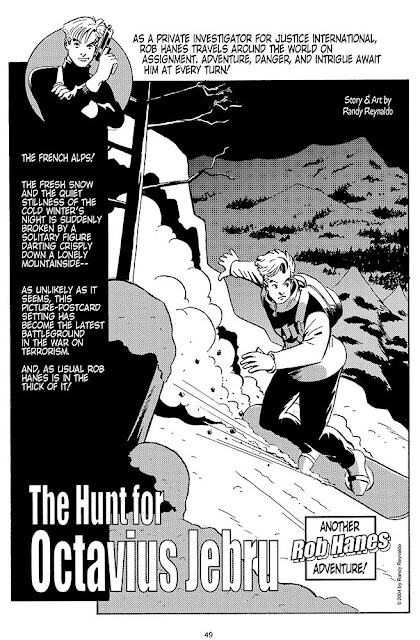 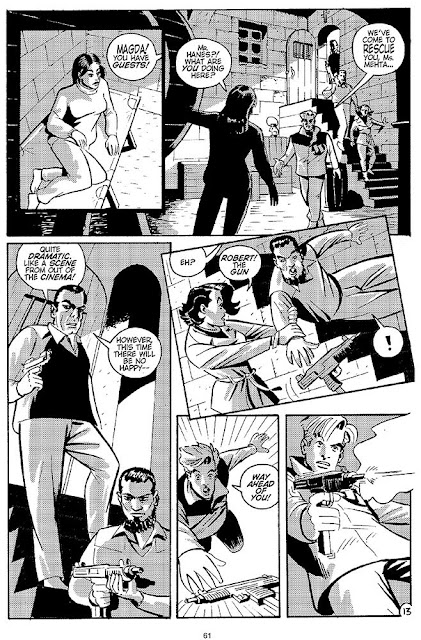 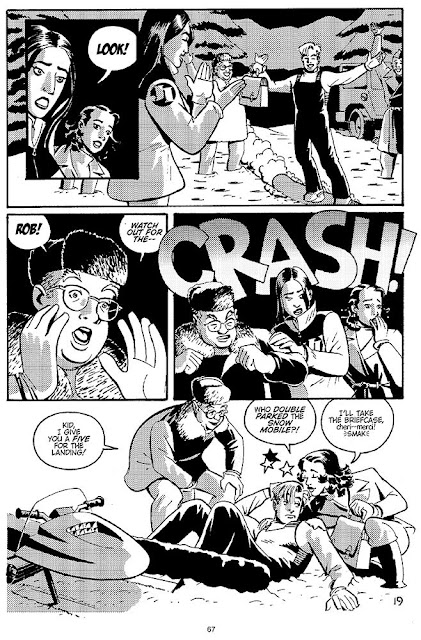 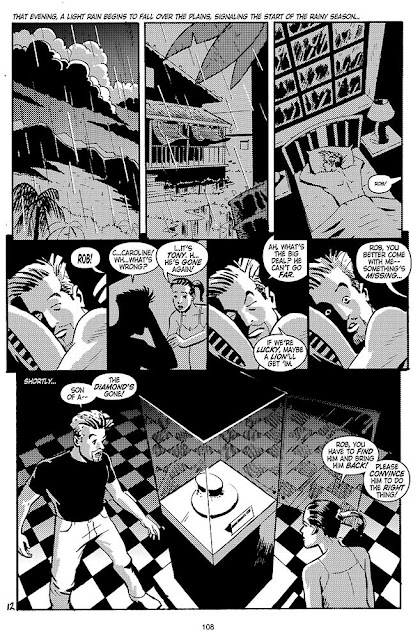 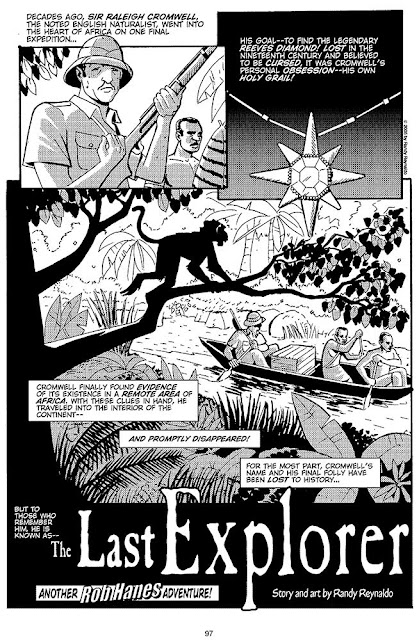 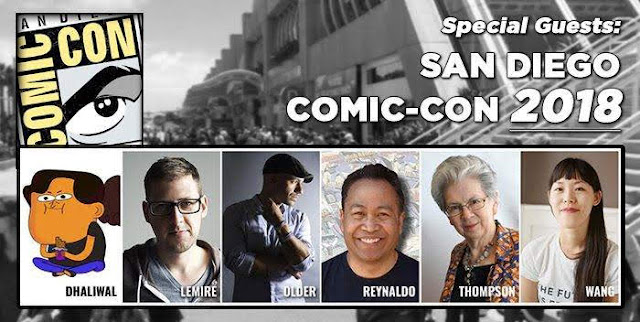 A few weeks back, I received word that my panel as a San Diego Comic-Con Special Guest is scheduled on Thursday, July 19, 12:30–1:30 p.m. in Room 4! Details to come, but I hope to broaden interest in the panel a bit by talking about how I started out and my experiences as an indy publisher! To everyone who's going to Comic-Con this year, hope you can attend -- and bring a friend! 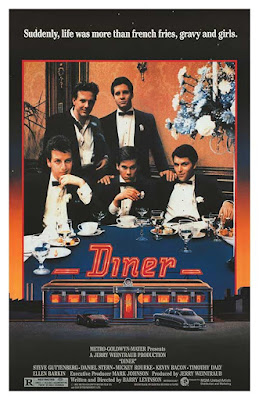 The final of my 10 films in 10 days is Diner (1982), another one from college. Diner was one of the earliest examples of a “sleeper” hit that was saved by famed film critic Pauline Kael. The film reportedly had screened badly with test audiences and MGM was ready to bury it. However, after Kael saw it, she insisted MGM release it, promising it would review well—which it did. I was so taken by this movie on its release, I saw it three times in a week in the theater. (Of course, I also own it on DVD.)

The film comedy was the directorial debut of Barry Levinson, who also wrote the screenplay, and featured actors Steve Guttenberg, Daniel Stern, Mickey Rourke, Kevin Bacon, Timothy Daly, Paul Reiser, and Ellen Barkin. (With the exception of perhaps Guttenberg, this was the film debut for most of the actors.)

Based on Levinson’s own experiences as a Baltimore native, Diner follows the episodic misadventures of a group of recent high school graduates in late 1950s Baltimore trying to decide what to do with their lives, centered around the week leading up to one of the friends’ wedding. (For the wedding to occur, however, the bride-to-be, who is never seen on screen, must pass a test about football!) Much of their lives centers around hanging out and eating at a local diner, often into the early morning hours.

I suspect the studio thought it had green-lit a film to capitalize on the teen comedy hit Porky's and did not expect such a soulful, thoughtful film. While the story and characters are all distinctive and well-defined—due to both the script and performances—it is the pointless but hilarious banter in the diner, much of it ringing true and reportedly ad-libbed by the actors, that helped give the film a sense of character and verisimilitude, and made it so memorable. The film no doubt resonated with audiences for many reasons, but it wonderfully captures the essence of youthful male friendship. Indeed, it was a touchstone for many of my college buddies as well—we watched it on a movie night once and often made it a point to take a “Diner” photo—a recreation of the Diner poster of the principal cast gathered around a dinner table in the afterglow of a wedding—at each other’s marriages. 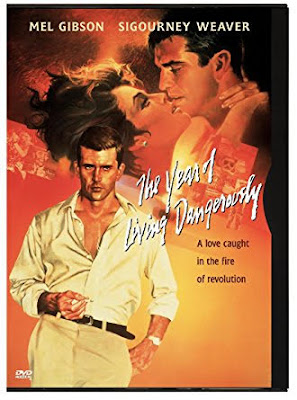 My ninth of 10 films in 10 days is another movie (like my previous one) I’ve blogged about before, The Year of Living Dangerously (1982), and another one that came out during my college years.

I’ve always enjoyed smart political and newsroom thrillers and dramas (like Three Days of the Condor and All the President’s Men, both on my list). Adding to the appeal of this film was its exotic locale, Indonesia. Though the movie was a U.S.-funded production that featured American actors (such as Sigourney Weaver and Michael Murphy), the film is otherwise thoroughly Australian, with Aussie director Peter Weir at the helm and, in the lead role, Mel Gibson, who had already received international attention for the first two Mad Max films and Gallipoli).

Based on the novel of the same name, the film follows a green but ambitious Australian journalist named Guy Hamilton on his first overseas assignment in the early 1960s, set against the backdrop of real-life historical events in a country on the verge of civil war, as Communists threaten to topple a government that is dominated by the military and Islamists.

On the surface, the film is somewhat in the same category as the classic Casablanca—a love story mixed with foreign intrigue. Here, Hamilton must choose between his ambition to break a big news story and his love for a British embassy worker/undercover intelligence agent (Weaver). But this being a Peter Weir film, the addition of Hunt’s character—as a half Asian-half European dwarf—and the backdrop of Indonesia lends the film an otherworldly “magic realist” quality that is greatly accentuated by the film’s score by Greek composer Vangelis (who also scored Blade Runner).

It’s a terrific, layered film that influenced some of my early comic-book stories. Indeed, my love for the film inspired me to read the original book—since this was well before the Internet, I discovered the book was no longer in print in the U.S. and had to get a cashier’s check in Australian dollars to cover the cost of the book and overseas shipping to order it. But I also enjoyed the book, so it was well worth it.