The Happiest Place on Earth 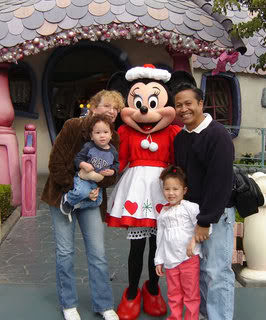 Haven't blogged in awhile, so I thought I'd send this shout-out from my family's hotel in DISNEYLAND while my family sleeps in!

For various reasons the Reynaldo brood didn't travel to see family this Thanksgiving or Xmas, so rather than stay holed up at home, we decided to go to Disneyland for a small vacation. We made it into a surprise for the kids (the eldest is 5), via a note that Santa left for the kids Xmas day. We left for Disneyland Xmas evening and spent the day at the park the day after the holiday. (In the past, in such situations, we've also gone skiing at local mountains, but we made this decision so last minute, it would have been impossible to make reservations at this late date. Plus, of course, the youngest who is one-and-a-half is probably too young to take to the snow yet. Not for him, but for mom and dad who'd have to carry him most of the time on ice and snow!)

As a sign of our secular times, it's surprising how many people do this. We went to Downtown Disney Xmas night to get tickets for the next day in advance and it was packed with holiday shoppers (Downtown Disney is basically a high end outdoor mall outside Disneyland that feeds into the main entrance; but you can shop there without having to go inside the park). And Disneyland was packed too.

As expected, Disneyland was packed, shoulder to shoulder at times and in certain areas of the park. However, because we wanted to be sure to get in and beat the crowds, we arrived at the park's opening at 8 a.m. (that's why we arrived the day before--we were close enough to walk into the grounds from where we were staying). As a result, we got to go on tons of rides before noon, with no wait longer than 20 minutes (remember, because of the kids, we generally only hit the kiddie rides).

Since we planned to be there into the evening, we went back to the hotel at about 1:30 pm to let the kids nap. Believe me, as much as I love Disneyland, it was nice to relax a bit. We then had dinner at the hotel (another smart move for us) and got into the park by 5:30 pm.

I was pleasantly surprised that we actually hit some major rides with no major waits in the evening. A lot of rides go in cycles and some rides that we avoided because they had an hour wait, suddenly had waits of only about 15 minutes or even nothing! So we hit the Jungle Cruise (cool at night) and my daughter and I waited only 15 minutes to get on the Matterhorn! 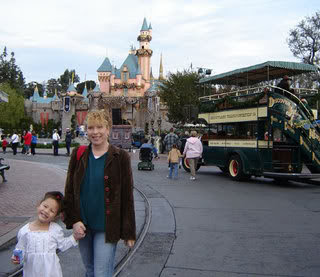 As this suggests, my oldest girl is now tall enough to go on more of the "real" rides. We realized this because my wife wanted to take her on Star Tours. And even though the sign said the wait was 45 minutes, they ended up waiting only 20 minutes, so they ended up going twice. While there, the person who measured my daughter's height (you have to be 40" tall, so she just made it), said that she was now big enough for almost all the rides at Disneyland (the only major exception was the Indiana Jones ride--I think yhou have to be about 50" for that ride). As a result, when we noticed that the line for the Matterhorn was so short, we got on it. (BTW, she liked the ride, but didn't like the Abominable Snowman that's featured in it, so she didn't want to go again). Believe me, my daughter is more of a daredevil than I ever was at her age! When we got off the ride, the Disney Christmas parade with all the characters had started, so my daughter watched that from my shoulders. And by pure coincidence, we ended up watching the parade only a few feet from my wife and little boy, who had gone off to do their own thing when I took my girl on the Matterhorn!

The other cute thing that happened is we actually saw a lot of the major characters around the park, and at one point Mickey, Goofy, and Pluto walked by and patted my baby boy's hand as they walked by as I was holding him. Later, we took a family photo with Minnie Mouse; afterwards, he stood by trying to get her attention by dancing and batting his eyes. A lot of people noticed him flirting in this way, and Minnie rewarded him quite a bit by waving back to him, which he loved. It was very cute.

Our first and last rides at the park was It's a Small World, which my daughter loves. It was especially dressed (and re-recorded) for the holidays, so it was quite festive, and my daughter sings along the whole time. When we were on line for It's a Small World that night as our last ride, we also got to see the holiday fireworks show with accompanying holiday music -- and we were standing at one of the best places to enjoy it. So it certainly brought our visit to quite a fitting conclusion.

Anyway, it's back home today!
at 9:05 AM Posted by Randy @ WCG Comics 0 comments 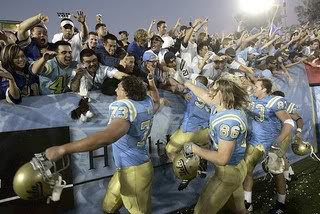 I'm an alumnus of UCLA, so I thought I'd share my excitement over the UCLA Bruins upsetting USC today at the 75th annual meeting of the two teams' football programs (usually the last game of the season for both teams).

The UCLA-USC football game in Los Angeles--the only crosstown city college rivalry in the country--is always big locally, but what made this win especially sweet was that the Bruins not only got to finally snap a 7-game losing streak against the Trojans (after themselves beating 'SC a record 8 games in a row), but did so in a game with nationwide implications. Going into the game, USC was ranked second in the nation, was favored by 12 points to beat UCLA, and with the win was expected to play for the national championship, their fourth shot in five years. Instead, unranked UCLA played the spoiler, upsetting USC 13-9, thus ending the Trojans' national championship hopes. This also was the first time in 63 games (an NCAA record) that USC has scored less than 20 points. The score clearly shows that what won the day was the UCLA defense.

As a student and as an alum I've personally attended many classic and memorable football games over the years and have personally experienced many victories just as sweet (and many lows too). But it's been a long drought, and it was fun to rekindle some great memories with this win. In fact, after the game my family and I went into Westwood Village (where UCLA is located) and were thrilled to find ourselves in the midst of students celebrating raucously in the streets. (Old college friends and I used to try to gather annually for the game, but this tradition has temporarily fallen to the wayside in recent years since many of us have young families.)

With all due respect, USC deserves all it has earned in the last several years as one of the finest football programs in the country. Which makes this victory all the sweeter. 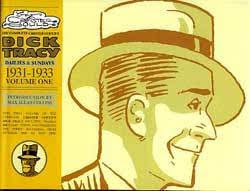 The Complete Dick Tracy , a projected compilation of the entire run of Chester Gould's iconic syndicated comic strip. This volume, of course, begins with the very first strip from October1931, and takes the reader through the series' first year and a half.
IDW Publishing has just released the first volume of

I've seen samples of the strip from its first week, so the strip's early crude art was not new to me. Nevertheless, it's fascinating to read the strips in the way they were intended to be in continuity and to watch the growth of the series.

Dick Tracy, of course, is well known for being one of the most stylized and idiosyncratic of newspaper strips (as well as perhaps the most graphically violent). In its early days, however, Gould still was a diamond in the rough and finding his way artistically. The art (even for its time) is fairly crude. But one can see that Gould also had a good sense of his vision: like the Warner Brothers noir films of the period, the strips are raw, violent, and hard boiled. And many of the strip's main elements are already in place like his girlfriend, Tess Trueheart, and his partner Pat Patton.

At the beginning of the strip, Tracy is a civilian, but in the first 10 days of the strip, readers witnessed a home invasion, an unarmed man coldbloodly murdered in front of his family, and the kidnapping of Tess Trueheart. To help crack the case, Tracy is deputized on the spot without much ceremony by the police commissioner, solely on the commissioner's hunch that Tracy might be helpful on the case. (Obviously, those were simpler times!) Tracy quickly becomes the department's rising star and most hardnosed gangbuster.

The strip's evolution and growth are gradual but sure. By the end of the first volume, Tracy's legendary hawk nose is closer to what it eventually became (though not quite all the way there yet!), the art gets sharper, and one can see Gould finding his style, particularly becoming more bold and confident in his use of solid black. In addition, more of the strip's classic characters like Dick Tracy, Jr. are introduced, and you start seeing the debut of the kinds of distinctive-looking and unsightly villains that Dick Tracy became known for. By the way, the first villain faced by Tracy in the strip is Big Boy, who Al Pacino played in Warren Beatty's stylized film adaptation of the strip. (Unfortunately, the radio-TV watch and the spaceship were still decades away!)

This is a great time to be a comic strip fan now that the complete runs of classic series like Dick Tracy, Peanuts, Popeye , Gasoline Alley, and Terry and the Pirates have become available or are underway. The first volume of Dick Tracy is a hefty tome, making it well worth the proce of admission.
at 1:02 AM Posted by Randy @ WCG Comics 0 comments