A LOOK BACK: Sgt. Rock 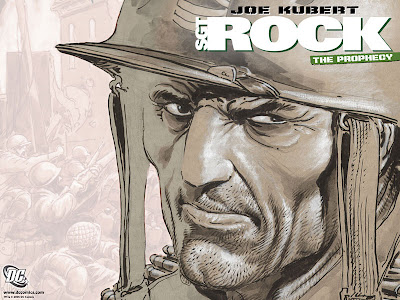 In addition to comics and playing outside, one of my big interests when I was growing up was World War II. I loved playing guns in the woods where I grew up (when it snowed, it evoked for me being in the Ardennes during the Battle of the Bulge). Each week I dutifully checked the television schedule to note any World War II film that might be playing. (My childhood and adolescent years took place during the late 1960s through the ‘70s). Favorite films in the genre were the Longest Day, To Hell and Back, the Dirty Dozen and Go for Broke.

So, of course, Our Army at War featuring Sgt. Rock was a natural for me, combining my love for both comics and World War II. In addition to Detective Comics which featured Batman, Our Army at War was the first comic-book series I collected regularly. In fact, after I realized the significance of issue numbers, I began going back to fill in holes in my collection. Like most kids of my era, I purchased my comics at a local drugstore with a spinner rack. I was fortunate that the local drugstore, despite its limited selection, carried Rock nearly every month. I discovered the series with issue 267. (One of my most memorable and fondest scores was finding issue 269—a “100-page giant”—at the terminal of the Staten Island Ferry.) 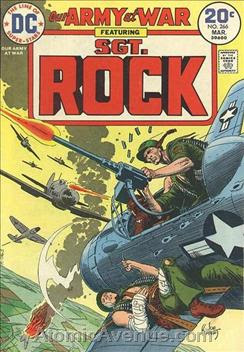 I started reading the series after the artist most associated with the series, Joe Kubert, had stopped drawing the series regularly. Fortunately, the series continued to feature some of the best artists of the era, including John Severin (who drew the first issue I purchased), Russ Heath, and George Evans. Artist Frank Redondo—one of the many highly skilled Filipino artists who began working for DC during this period—shortly became the series’ regular artist, successfully channeling Kubert in his work. Despite the variety of artists, however, Rock’s distinctive look and character design remained consistent regardless of the artist, helped in large part, of course, by the fact that legendary editor/writer Robert Kanigher remained the series’ writer.

Through it all, however, Kubert continued to furnish the cover art (and at one point became its editor). As one can see in the samples provided with this blog, Kubert’s gritty style perfectly complemented the subject matter. Each cover usually captured perfectly the essence of the issue’s story or a compelling dramatic moment, and always succeeded in grabbing one’s attention from among all the comics on the spinner rack. Incredibly, years later, Kubert admitted in an interview that he didn’t particularly have any real affinity for war comics—as a typical journeyman artist of his generation, it simply was a paying gig. 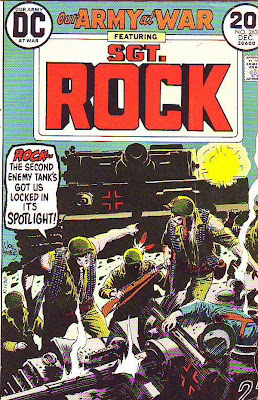 Though Kanigher was one of the most prolific writers of comic-books for the five decades he worked in the industry, little is known about him personally. Professionally, Kanigher churned out stories at an astonishing pace. Unlike many of today’s writers, Kanigher had little use for continuity outside of what was required in the occasional multi-part stories. Nearly all stories were self-contained. In retrospect, one can see the formulaic approach of Kanigher’s work, which was a reflection of his background as a short story writer. This formula involved finding some hook for the story and running it into the ground until some ironic or revelatory ending was reached—but Kanigher nearly always pulled it off skillfully. (Kanigher was also known to be a bit of a hard-ass, who apparently delighted in tormenting artists who gave him an opening—tellingly, Kubert reported never having any trouble with him, and artist Neal Adams talked about once standing up to him and never again being bothered by him). Regardless, the man was a writing machine.

Sgt. Rock tended to swing clear of any sense of jingoism, and instead focused on the joes in the trenches and the futility of war without being preachy—which was a perfect fit, no doubt, by the time the Vietnam War and the peace movement was in full swing. During the time I was reading it, most stories ended with the small aphorism, “Make War No More.” It was telling that many of the letters of comment came from servicemen. 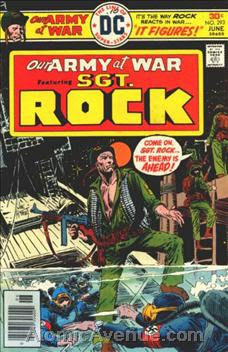 An extra treat of Our Army at War were the back up stories, featuring outstanding work from people like Alex Toth, Ric Estrada, and Sam Glanzman, who drew extensively on his personal experiences as a navyman who served in the Pacific during World War II.

I often have mentioned that Milton Caniff’s Terry and the Pirates was one of the comics that most inspired me. However, Sgt. Rock has had a similarly immense impact on me—and though I may not go back to those comics for inspiration like I do some of my other favorites, the influence of Rock is still alive in my work….

When I was in junior high school, I began my own home-made comic-book, “War Comics starring Sgt. Hanes and Hell Platoon.” The series ran for 23 issues from 1973 to 1976, which was shared with friends and classmates. “Sgt. Jim Hanes” eventually morphed into a proposed daily adventure strip set in World War II, and when I decided to instead create a modern day adventure series, I created a new character, ostensibly Sgt. Hanes’ nephew in my continuity: Rob Hanes. (One of my future goals in Rob Hanes Adventures is to bring in Sgt. Hanes and do a throwback World War II story.)

By the way, the name of my imprint for the series was the “War Comics Group”—or WCG for short. 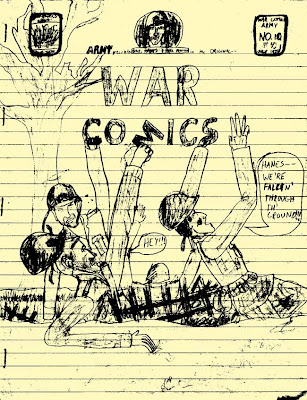 Also, a new Sgt. Rock limited series, "The Lost Battalion," is scheduled to be released beginning in November 2008.

A new biography of Joe Kubert, Man of Rock, from Fantagraphics Books is due this month. A fine interview with its author, Bill Schelly (an acquaintance of mine who's also a fan of Rob Hanes Adventures!) is available here.
at 12:35 PM Posted by Randy @ WCG Comics 1 comments

Labels: A Look Back, Comics, History of Comics, Sgt. Rock

Good progress has been made on the next issue of Rob Hanes Adventures and I've just posted the first few pages from the upcoming story to give fans a taste of what's coming. For the advance preview, click on the image above or here.

In the issue, Rob becomes stranded on a desert island with a beautiful female prisoner he has been hired to extradite back to the U.S.

(Note: As always, these images are subject to change prior to publication.)
at 8:19 PM Posted by Randy @ WCG Comics 0 comments