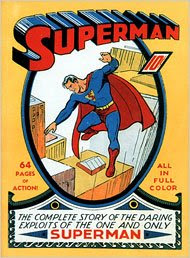 Given that much of this blog is devoted to comics, it would be incredibly remiss of me not to comment on the recent news that a Federal court has ruled that the heirs of Jerry Siegel are entitled to at least a partial share of U.S. copyright ownership in the iconic character, as reported in the New York Times.

Siegel co-created the character with Joe Shuster during the 1930s, and together they famously sold the character to what today is DC Comics for $130, before eventually becoming work-for-hire employees of the company. Their story is well told in Gerard Jones' terrific Men of Tomorrow, which I blogged about here.

I'm confident that the comics will continue to be published under the DC Comics banner. And no doubt the legal maneuverings will continue. Nevertheless, this is a moment of great significance—as well as vindication and redemption—in the history of the comics industry.

Superman is the bedrock on which DC Comics and the comics industry were built. However, the character also represents one of the industry's greatest shameful legacies, so there must be some measure of satisfaction that, for once, the "little guy" won.

For some cogent analysis on the intracies of the ruling and their complex ramifications, visit here, here, and here.

The Future is Now

My comic-book series, Rob Hanes Adventures, was created in the 1970s when I was a starry-eyed junior high school student/budding adventure strip cartoonist. One of the most important element of the series—Justice International, the agency Rob works for—was a basic part of the series at the very outset. Though I understood it was artistic license, I always was a bit concerned that the idea of a “worldwide detective agency” was a bit farfetched, particularly since my series had a strong “real-world” element to it.

As I have mentioned elsewhere, history has caught up to the series. Although noted private investigation and security firms like Kroll Associates and the Control Group were founded in the ‘70s (around the same time Justice International popped into my head), it’s not really until the 1990s that such companies have broadened their reach and become a more visible part of the landscape. The Iraq War has particularly brought the idea of security contractors (many of them simply private mercenaries) to the forefront.

What perhaps first brought such specialists to the forefront was several incidents in which contractors were killed in firefights in Iraq. More recently, a report in March/April 2008 issue of Foreign Policy magazine reports that 70% of the U.S.’s intelligence budgets for spying went to private contractors. Tellingly, the title of the article is “Spies for Hire.”

As I said, while I always viewed Justice International as a necessary piece of artistic license to make Rob a modern-day globetrotting private eye, it appears that I needn’t have been concerned about the credibility of such an agency!
at 10:32 AM Posted by Randy @ WCG Comics 0 comments 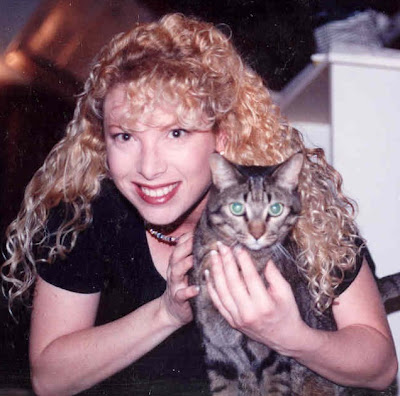 At the risk of alienating potentially half my reading public, I’m admitting that I’m a cat person.

Although I never grew up with pets, I became a convert when I initially moved in with my now-wife, who owned a cat named Dezi. Since I’d never lived with a pet in the house, I must admit I was a bit apprehensive at first and simply hoped to reach some level of mutually-tolerable acceptance. Instead, I not only got used to her, I truly came to appreciate her and consider her part of the family—and I’m pretty sure it was mutual. (I asked my wife once whether she would have had to make a choice if I didn’t getting along with Dezi—she said yes, and I suspect I would not have come out on top!)

Dezi left us two years ago this month due to natural causes—she was nearly 20 years old (7 is considered old for a feline!), so she lived a full life, as well as brought a lot of enrichment and joy to our home.

This is just a remembrance of her, and I’m glad our eldest child had an opportunity to spend some time with her before she left us. (A full tribute to Dezi, posted March 2006, can be found here.)
at 11:00 PM Posted by Randy @ WCG Comics 0 comments