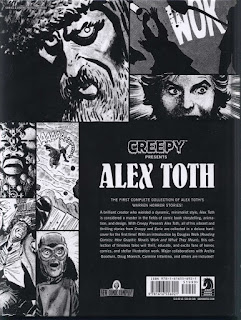 I’ve written extensively about Alex Toth, one of my favorite cartoonists. He was never closely identified with a single character or series—the closest perhaps being Bravo for Adventure (for which he produced a total of two stories) and a relatively long run on the Zorro comic-book—and primarily drew genre stories for various companies throughout his career, elevating them through his artistry and storytelling skills. (Another chunk of his career was spent doing character design and storyboarding for animation, most notably, Jonny Quest and Super Friends.)

Over the years, there have been numerous collections of his work, particularly his romance and war comics work at Standard, DC and other publishers from the 1950s and ‘60s—as well as in the definitive three-volume illustrated coffee-table biography, which I have reviewed.

So I was happy to come across this definitive compilation, Creepy Presents Alex Toth, collecting his little-seen horror work in the pages of Creepy and Eerie magazines from Warren Publishing, dating from the late 1960s, ‘70s and early ‘80s. (Creepy and Eerie were black-and-white magazine-sized newsstand comics, inspired by the well-regarded but notorious EC Comics of the 1950s.) The stories in these pages show that Toth always worked at the top of his game, even in his later years.

The collection shows a different side of Toth. An old school romantic, Toth greatly enjoyed doing romance comics. Aside from the occasional gem, the stories were often formulaic and arguably beneath someone as talented as Toth, though Toth’s work invariably gave them some emotional heft, raising the writing and stories to a higher level. 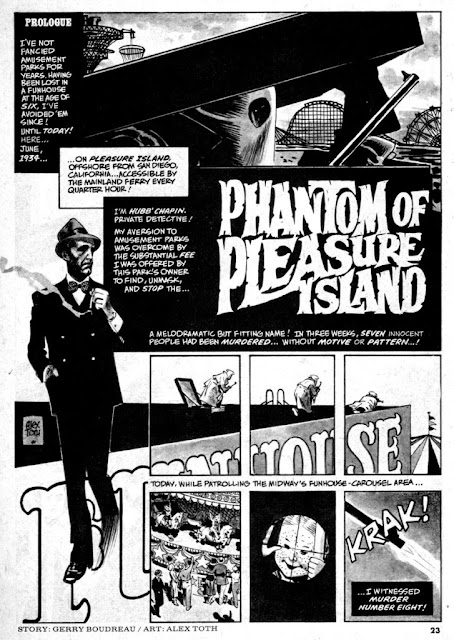 So it is interesting to see Toth drawing stories that are a little bit more cynical and grittier, exposing a darker side of the human condition and imagination. While I have never been much of a fan of horror, the work in this collection are of the O. Henry type, usually with an ironic or twist ending consisting of retribution or poetic justice. And even with occasional depictions of grisly horror, they still feature Toth’s penchant for strong graphics, crisp storytelling and great framing and cutting.

I was expecting to dismiss the stories as schlock but was pleasantly surprised that the stories were uniformly well written and high concept. It helps of course that Toth is paired with some great writers, such as the legendary Archie Goodwin, which no doubt inspired Toth in turn.

Toth is often referred to as an “artist’s artist” because other artists study his work—and this volume too is a great classroom for cartooning and comics storytelling. But the stories are entertaining as well as short story pieces, so anyone interested in seeing what all the fuss is about with Toth would do well picking up this collection. 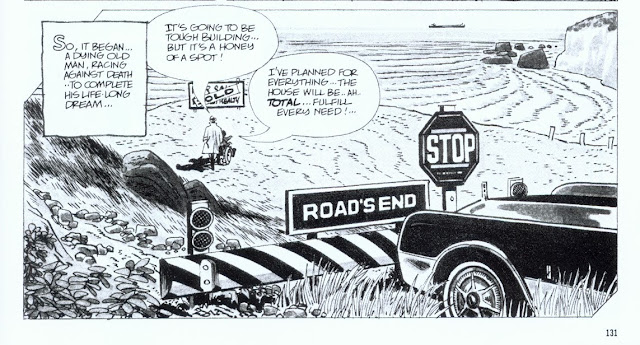 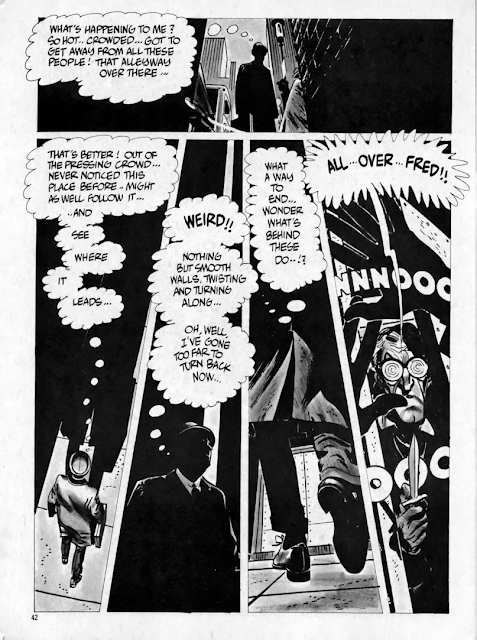 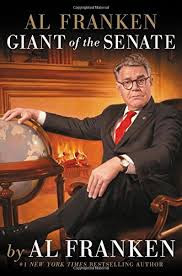 Though Al Franken so far insists that he’s not interested in running for president, like many such political biographies, Franken’s latest book, Al Franken: Giant of the Senate, despite its cheeky title, seems to be a perfect vehicle to position him for such a run. (Frankly, I wish he would!) The book describes his professional journey from funnyman, to activist, to “giant of the Senate.”

Franken, of course, began his professional career as a comedian, primarily as a writer and performer for Saturday Night Live—he was a writer at its debut and, having personally watched the show as an adolescent from its very inception, I can say I’ve seen much of his journey. In fact, I can say this connection came full circle in 2011 when my family and I took a trip to Washington, DC and saw Franken in person, along with other tourists, when we visited the Congressional chamber which was empty except for Franken presiding in the otherwise empty chamber (presumably for some reasons of protocol). It was quite a treat to discover him, of all people, sitting there when we walked into the gallery! 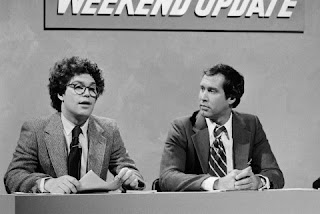 Following SNL, Franken gained prominence as a writer, radio host and activist in support of progressive ideals. Early books, Lies: And the Lying Liars Who Tell Them: A Fair and Balanced Look at the Right and Rush Limbaugh Is a Big Fat Idiot: And Other Observations (which I’ve read) were best sellers—aside from being hilarious, they were very cogently written, expertly tearing apart the arguments, tactics and misrepresentations of the far right fringe.

Following his career on SNL, Franken got involved in efforts to counter the lies he saw emanating from the right through outlets like his books and the Air America radio network. After the tragic death in 2002 of progressive Minnesota Senator Paul Wellstone, a personal friend, who died in an air crash with members of his family and staff while running for re-election, Franken in 2008 decided to run for the seat himself against Wellstone’s successor, GOP candidate Norm Coleman. He acknowledges it was partly to spite Coleman, who he felt had disrespected and capitalized on Wellstone’s death, though Franken soon recognized the important responsibility of holding office. 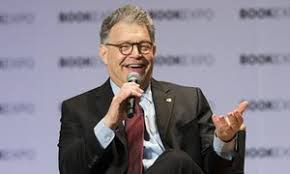 Franken describes his run for the Senate and the learning curve he went through to during the race, including the use of the “dehumorizer” by his opponents, which they used to great effect by taking his work as a comedian out of context to portray him as unfit for office. (Franken won by a razor-thin margin and was not even seated until about 8 months into what should have been his first term due to continued challenges by his opponent.)

The book then speaks about his orientation into the Senate and includes many funny anecdotes about his experiences and Senate colleagues. It then segues into his accomplishments, as well as his disappointments, as a U.S. Senator. 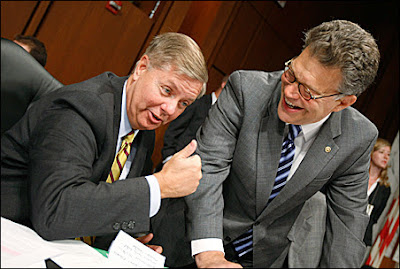 What’s most surprised me about Franken’s book is how seriously and deeply he respects the traditions and history of the Senate, and the spirit of innate civility and partnership that is essential to the body and effective government. While he acknowledges how he is compelled to counter the values and ideas espoused by his GOP colleagues, he also reveals how he bonded with them, even people like Mitch McConnell and Jeff Session,s often through humor or shared interests. At one point, for example, he tells a story of how Sessions, after noting how dedicated Franken was to his work as a fellow member of the Judiciary Committee—gave him a head’s up to ease up in his questioning that was beginning to alienate his GOP colleagues, which Franken appreciated.

One of the most striking anecdotes involves how bad he felt after obviously rolling his eyes while McConnell had the floor. Apparently, this is very much contrary to the norms of collegiality in the Senate and, in addition to getting dressed down by McConnell, he felt genuinely awful by this breach of conduct and did his best to personally apologize—which McConnell, in turn, graciously accepted.

For me, however, this respect for tradition, office and decorum contrasts starkly with the conduct Franken recounts of people like vile Congressman Addison Graves "Joe" Wilson, Sr. (South Carolina), who famously yelled “You lie!” during a televised address by President Obama. Franken uses this anecdote not only to show how brazen people in public life have become, but also to show how such behavior today is REWARDED, usually in terms of fundraising, which only further encourages such conduct. So while I appreciate and admire Franken’s respect of his office and colleagues, it nevertheless is frustrating to see others constantly break those rules with impunity at the expense of the values and soul of the country. 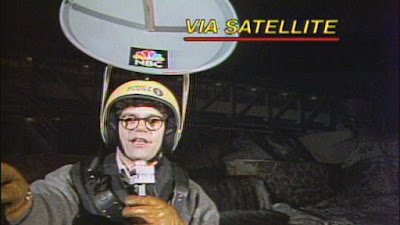 Nevertheless, Franken is clear in identifying the enemies of progressives and the interests of most working folks—indeed, one of those chapters is focused just on Ted Cruz, who is widely despised by both parties. (Senator Lindsey Graham famously opined in 2016, “"If you killed Ted Cruz on the floor of the Senate, and the trial was in the Senate, nobody would convict you.”) And Franken doesn't just speak of people on the other side of the aisle, but also about the corrupting influence of lobbyists and money/fundraising—particularly as typified by the infamous Koch brothers, whose threats to pull patronage from politicians are apparently enough to have many of them support bills like the Republicare act despite it polling at under 20 percent among their own constituents. For these reasons, Franken makes a convincing case for the need to control the influence of monied interests in the political process, perhaps through federally-funded elections. (One illuminating chapter focuses on the amount of time he and other officials must spend raising money—often, full eight-hour days are devoted to these efforts.)

Franken makes clear that people run for office for different reasons. As for himself, he states outright that during his journey he discovered what made him suitable for the job was he likes people—Franken is clearly a gregarious personality, who genuinely respects his hard working constituents, regardless of political stripe, and doing his best to represent them and advance their interests. Remarkable from someone whose career was built on the folly and silliness of his fellow humans.

Given the number of pages spent in the book on our discouraging, polarized political process, Franken surprisingly ends the book on a positive, optimistic beat, encouraging readers to remain engaged and exercise their rights as citizens in a democracy and placing his trust in the wisdom of its voters.

It’s not like I read a lot of these kinds of books, but I must say that above all Franken has written a book that is not only funny, entertaining and a breezy read, but also provides a great “nuts and bolts” behind the scenes look at life in the Senate and Washington, DC and what it takes to survive, get along, and legislate.
at 6:52 AM Posted by Randy @ WCG Comics 0 comments