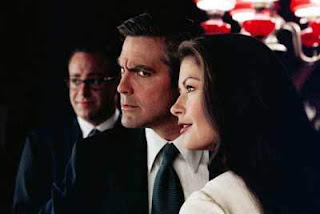 One of the perks of writing a blog is the opportunity to talk about some overlooked gems that deserve a wider audience.

I suspect this was partly due to raised expectations caused by the success of O Brother. I've seen Intolerable Cruelty several times, and consider it among the Coens' best and funniest (along with the Hudsucker Proxy, another personal favorite). In Cruelty, Clooney plays Miles Massey, an immensely successful divorce lawyer who thwarts a gold-digging divorcee played by Jones from striking it rich in her divorce. Both, of course, become attracted to each other, and hi-jinks, romantic sparks, and double-crosses ensue.

Like many Coen films, Intolerable Cruelty has a streak of Warner Bros. cartoon comic lunacy and dark humor running through it, but it also plays like a classic 1930's screwball comedy. Many people have compared Clooney to Cary Grant, and in this film particularly the comparison is actually very apt. Though Grant's iconic image is based on his style and elegance, Grant was also quite a physical comedian, often mugging shamelessly for the camera. Here, Clooney successfully channels Grant's screwball persona to great comic effect.

This is a terrific--and, more importantly, hilarious--film that deserves a wider audience.
at 12:48 AM Posted by Randy @ WCG Comics 0 comments

Email ThisBlogThis!Share to TwitterShare to FacebookShare to Pinterest
Happy new year everybody! 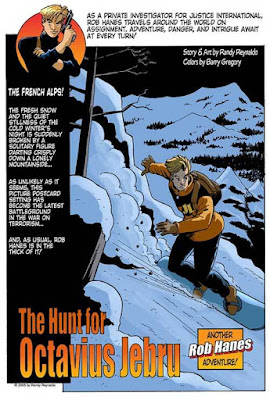 Lots going on! Over the holiday break I not only took a trip to Disneyland with the family (as described in my previous post), but took time off to get some quality drawing time in. In fact, I've just about completed issue 10 of Rob Hanes Adventures! It kind of snuck up on me because I was working from an uncompleted script and as I began laying out the next page (p. 18), I realized, "Hey, this is the last page!" I still need to tone and letter several pages, but this puts me in good shape for a spring release, if not sooner!

In addition, I continued to update my online web comic, and began the process of registering it at web comic listing sites like Online Comics and the Web Comics List to ensure maximum exposure for the series. I also have begun the process of redesigning my series website to upgrade it to CSS format, and am also considering a major overhaul and redesign.

And thanks to a gift card from my lovely wife, I just purchased a 160GB external hard drive to supplement my dinosaur of a computer (it's a Pentium II that still runs Windows 98se, but given all my graphics needs, it continues gets the job done--no need to fix what ain't broke!)

And to top it off, the colorist for the web comic series, Barry Gregory, of 01Comics sent me a sample page from the story he's currently prepping. I thought I'd post it here to whet everyone's appetite--I think it looks terrific! (To see it full size, click here or on the image above.
at 3:24 AM Posted by Randy @ WCG Comics 0 comments