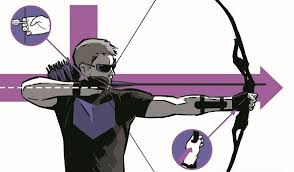 As I’ve mentioned in previous blogs, my purchase last year of a Kindle Fire HD tablet has re-introduced me to the pleasures of reading comics. While I continued to purchase comics on an occasional basis in support of my longtime local comic-book store, I actually read few of them due to lack of time and general disinterest. However, the novelty, ease and instant gratification of purchasing and reading comics on the Kindle (primarily via Comixology)—along with the benefit of not having to worry about accumulating comics that have to be stored somewhere—has led to my reading and checking out some new comics. And in the same way that “binge-viewing” on Netflix and other websites has become a popular way to watch television series, “binge-reading” comics is also a lot easier if I have missed earlier issues of an ongoing story.

I’ve never been a “DC versus Marvel” kind of comics fan, but having said that, the majority of the comics I’ve read from the Big Two have probably been from DC. As a traditionalist and student of comics history, I’ve always had a special appreciation for the grand-daddies of superheroes, Batman and Superman. But there have also been Marvel titles I’ve followed, most notably the Uncanny X-Men when Paul Smith and Chris Clarement worked on the series in the early ‘80s; John Byrne’s run on the Fantastic Four around the same period; and Frank Miller’s work on Daredevil (also around the same time!) which put the artist on the map. Though story is important, like a lot of people, I won’t look at a title unless I find the art just as compelling.

Well, pendulum has swung back because at the moment I noticed that a lot of the comics I’ve been reading and enjoying are by Marvel. Over the past decade, the Big Two have made it notoriously difficult for casual comics fans to read their main titles because of the level of multi-issue story arcs that can cross multiple series and take up to a year or more to play out. Even after DC’s much lauded “New 52” where they essentially re-booted the series, the storylines have remained convoluted, complex and confusing for many casual readers. In addition, I have found many of DC’s books to be over-rendered in art, story and coloring, making it unappealing and a bit of a muddy mess to look at; in contrast, Marvel doesn’t seem to take itself quite as seriously, meaning there still is a level of inherent fun in their comics that seems missing in many of the DC’s I’ve picked up.

So here are a few Marvel titles that have picked up my fancy recently: 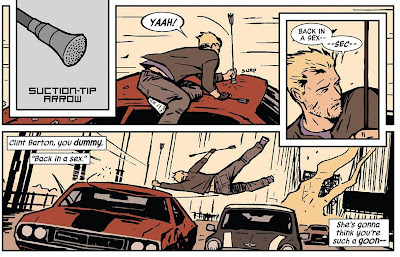 Hawkeye has never been on my radar and mostly existed as a second-tier character. The character’s appearances in the recent Marvel films, first as a cameo in the first Thor film, followed by a respectably significant role in the Avengers (as played by Jeremy Renner), no doubt raised the character’s profile for both the geek crowd and a general audience, presumably leading to the green light for this relatively new series. Nevertheless, the relatively low profile of the character undoubtedly has provided series writer Matt Fraction a blank slate and the freedom to play in this character's sandbox.

With the current Hawkeye series, Fraction has created a compelling non-superhero superhero series. As a nod to the character’s non-marquee status, the book revels in Hawkeye as the unglamorous third wheel member of the Avengers superhero team. The character lives in a New York City walkup tenement (which he purchases early in the new series series, becoming its landlord) and in between his sporadic high-profile adventures, he spends much of the series dealing with local Eastern European toughs who are terrorizing his tenants, the various women and ex-girlfriends in his life, and life in general. Both the art and color palette in itself shows that this isn’t your typical comic-book series: one issue is told in a series of romance comics covers while a recent story was told from the point of view of a stray dog, using icons to reflect the dog’s point of view.

At once innovative and groundbreaking as well as easily accessible (I can see this book having appeal to casual fans and women), the book has earned well-deserved plaudits. Hawkeye embodies the tone and approach I like to think Avengers’ director Joss Whedon is taking with his upcoming "Agents of SHIELD" television series which will focus on the behind-the-scenes supporting characters rather than the marquees. 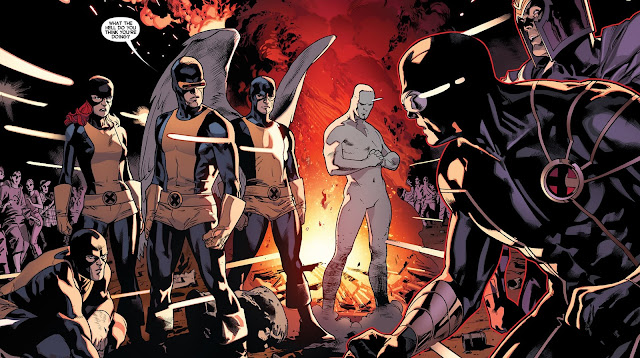 All-New X-Men
Aside from the brief period mentioned above in the ‘80s, I haven’t read any X-Men titles for years, though my tracking of comics trends has given me a faint knowledge of the series and main characters. The X-Men has always struck a chord among young people, using the mutants who make up the X-Men as an effective metaphor for ostracization and discrimination, as well as teenaged angst and disconnection. (I should add that X-Men is a franchise title, with multiple series and titles involving the characters and their spin-offs every month, much like DC’s Batman and Superman.)

Based on the art, I picked up a recent issue of this recently re-booted title and, thanks to the ease of instantly ordering back issues of the series, decided to go back to the first issue of this new title.

This new title’s conceit is that in order to correct a wrong that occurred just prior to the new series, the original X-Men who were the founding members of the group are brought from the past into the present to correct what has gone wrong, coming into contact with their present-day selves. (The set up is very reminiscent of Back to the Future — in fact, when the X-Men’s leader, the young Cyclops, asks what has gone awry with his present-day self, I was reminded of Marty McFly’s line at the end of the first Back to the Future film, when he asks Doc, who has returned from the future for him, “Did I turn into an asshole or something?”)

Though I have little knowledge of the circumstances or events that led to the launch of this new X-title, I have enjoyed the title in the moment and on its own terms, without the need to catch up on past exposition. Enough is given in the new series to understand what is going on.

The writer, Michael Bendis, has become one of Marvel’s most popular writers and I can see why. The X-Men has always been part adventure sci-fi / part soap opera, and Bendis has a gift for small dialogue touches that help define a character or relationship, or inject some humor to an otherwise serious moment when needed, while also spinning a fantastic but engaging yarn. One thing I will say about Marvel is that they’ve always been good at making the characters feel like they’re in the “real” world through setting and showing the social and political impact they would have if they really existed. Altogether, that has made this new title for me a fun, compelling read. 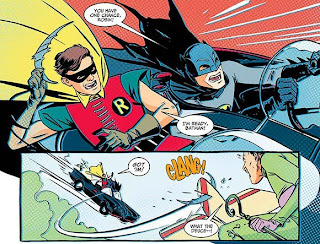 And just to show I haven’t completely abandoned DC, a fun new title is Batman ‘66, which is a special digital comic that is exclusive to Comixology in a tablet-friendly format and includes motion graphics. Written by Jeff Parker and drawn by fan-favorite Mike Allred, the series is basically the 1960s Batman television show (starring Adam West) in comic-book format. The series is fun and tongue-in-cheek, with great art that captures the likenesses of the actors and actresses who played the heroes and villains of the original show, as well as the vibe of the go-go ‘60s when the show was produced. I said earlier how a lot of DC’s comics seemed to have lost their sense of fun—this series more than makes up for that.
at 8:30 AM Posted by Randy @ WCG Comics 0 comments