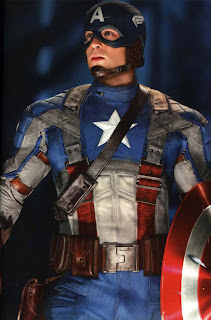 One of Marvel Comics’ goals in launching Marvel Studios was to gain control over the film adaptations of its properties. Up until the launch of the Sam Raimi-directed Spider-Man franchise (which was produced prior to Marvel Studios’ founding), Marvel had a very spotty record going from comics to film. Earlier adaptations of the Fantastic Four (1994) by Roger Corman (which was produced only for business reasons and never intended for release) and Captain America (1990) were barely B-level productions and never received official U.S. releases.

The Iron Man films, Thor, and now Captain America: First Avenger are the fruit of this gamble. They’re films done on Marvel’s terms that have remained faithful to the “Marvel universe” the company has built upon since the early 1960s. Rather than watering down the material to appeal to a mainstream audience, the company has instead embraced the rich history of its characters and storylines and allowed audiences to come to them.

Captain America: First Avenger is a perfect example of this approach. While the film wasn’t quite the “event” film I expected, it’s nevertheless a solidly crafted piece of popcorn entertainment that satisfies. It takes the original Captain America origin (about 8 pages originally, with many layers of continuity added over years) and amps it up with the help of state-of-the-art CGI and special effects. It’s perhaps one of the best examples of a comic-book sensibility brought to life on film. 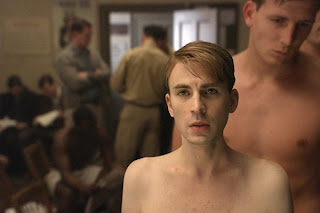 The film’s heart, of course, is Steve Rogers—the man behind Cap’s mask—who through the wizardry of film magic and a solid performance by Chris Evans goes from 90-pound weakling underdog to a World War II super-soldier hero fighting for democracy and the American way.

As with the other Marvel films, Captain America benefits from solid performances from accomplished character actors who know how to breathe life into their roles like Tommy Lee Jones, Stanley Tucci, and Hugo Weaving (who is terrific as the movie’s bigger-than-life pulp villain, Red Skull). As the lead, Evans believably inhabits his character, portraying Rogers as a scrawny sad sack with dreams and a big heart who, after his transformation into Captain America retains his sense of innocence, his integrity, and his commitment to the little guy. Marvel also has been smart in gambling on accomplished directors with solid resumes who are in need of a hit like Joe Johnston for this film, Thor’s Kenneth Branagh, and Iron Man’s Jon Favreau.

Though Marvel is notorious for not paying top-of-the-scale salaries, audiences benefit from seeing the budget all on screen: The art direction and cinematography in Captain America—from its 1940s futuristic design to the seedy tenements of Depression era New York—is outstanding in its detail, beautifully conveying the era. The seamlessness of the special effects—particularly in superimposing Evans’ head on a smaller body early in the film—is jaw-dropping and thoroughly convincing. 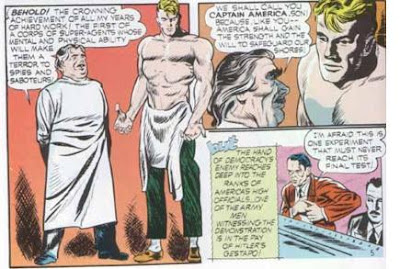 And while there’s more than enough for mainstream audiences to enjoy, fanboys can relish in the in-jokes and nods to Marvel continuity, such as seeing Iron Man Tony Stark’s father playing a leading role in the film as eccentric Howard Hughes-like inventor showman Howard Stark; a nod to the original Captain America uniform; introducing Cap’s sidekick from the comics, Bucky, into the series (the character reportedly is due to return on film, as he did in the comics); and bringing into the movie some of Marvel’s World War II characters, the Howling Commandos—including red-headed derby hat-wearing Dum Dum Dugan—into the film for the fanboys. (Sadly, the Howling Commandos don’t appear with their World War II era leader, Sgt. Nick Fury, who of course has been brought into modern Marvel continuity as a modern-day spymaster, played in the films by Samuel L. Jackson). 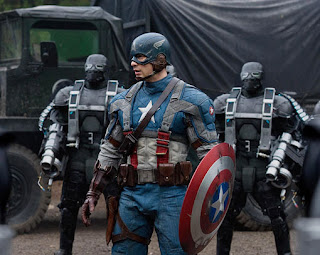 At the end of the movie, Marvel inserts an “Easter egg” that has become standard in all its films—in this case, a preview of the Avengers, a superhero team group that culminates what was set up in the preceding Iron Man, Hulk, Thor, and Captain America films and brings these characters (and some new ones) together, in accordance with Marvel continuity.

The success of the preceding films has raised expectations for the Avengers, scheduled for release in 2012. The film will no doubt have a lot of eyes on it, particularly as studios begin thinking of bringing other team books to screen. It will be interesting to see whether “more is more” or, whether instead, more is less”—in other words, will a team series exponentially raise excitement (and box office) for Marvel or will it serve to only dilute the properties? We’ll find out, I guess, in 2012!
at 10:47 PM Posted by Randy @ WCG Comics 0 comments 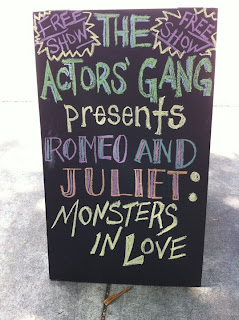 For the past six summers, the Actors’ Gang—a theatre ensemble company based in Culver City, California—has produced a free mid-day show in August for families.

The shows are liberally adapted from Shakespeare, made to be kid-and-family friendly with an emphasis on fun and earthy comedy, and feature the Actors’ Gang trademark commedia dell'arte style of acting. While the adaptations are greatly abridged, the shows nevertheless preserve portions of the original text, meaning that the shows are often in verse and can never be accused of “talking down” to its audience. Indeed, the shows include plenty of humor and modern-day references as a wink to parents and adults.

The Actors’ Gang is famous for its guerrilla stye of theater and the ensemble set the tone early for the series by hilariously reducing “Titus Andronicus”—one of Shakespeare’s bloodiest R-rated plays—to a feud involving clowns, its bloodiest parts presented as a slow-mo whipped cream pie fight. Other recent adaptations include “King O’Leary,” a presentation of King Lear brought to California’s Gold Rush days and “The Taming of the Shrew.” 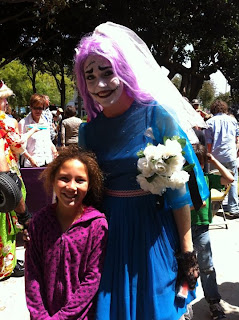 This year’s show, currently running through the end of August, is “Romeo and Juliet: Monsters in Love,” about the star-crossed love between a vampire (Romeo) and a zombie (Juliet). Their families are made up of a cornucopia of monsters and one of the highlights of the show is the cast dancing to Michael Jackson’s “Thriller” during the masquerade ball where Romeo meets Juliet. As always, the show is full of laughs, punctuated by fun musical stingers and cues.

The show is intended for families and children, but is just as entertaining for adults. As I do every year, I highly recommend it—this year’s show ranks among the best, I think, of the productions.

“Romeo and Juliet: Monsters in Love” is presented free of charge in Media Park, adjacent to the Actors’ Gang’s theatre at The Ivy Substation Saturdays and Sundays at 11am, August 6 – August 28, 2011. Running time approximately 45 minutes.
at 9:26 PM Posted by Randy @ WCG Comics 0 comments