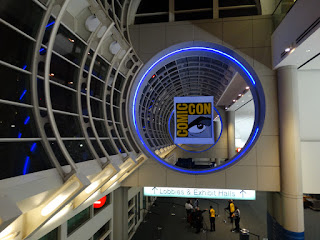 Now is the time of year when people publish their tips for enjoying—and surviving—the San Diego Comic-Con. One of the best each year is Tom Spurgeon's comprehensive list of tips at his website, the Comics Reporter.  You can also find a whole slew of other tips here.

I’ve been attending the San Diego Comic-Con nearly every year since the mid-1980s, so as one can imagine, I’ve developed my own approach and routine for the show. Given how Comic-Con has grown and evolved, however, those routines have been changed and re-adapted over the years. Keep in mind that I also have a slightly different experience than regular attendees because, as an exhibitor, I have a home base where I can actually occasionally sit to rest my feet and stash stuff; on the other side of the coin, I have to be “on” most of that time meeting and reaching out to attendees, a bit like a carnival barker. That, in turn, gives me little time to actually walk the floor, let alone attend panels.

With those caveats, here are a few tips/comments of my own about making the most of the Comic-Con experience, based on my years of attendance.

The San Diego Comic-Con is a big umbrella for all things pop culture and geek, including television, movies, sci-fi and fantasy, books, gaming, toys, steampunk, cosplay, and, oh, yeah, comics too. Seeing “everything” is pretty much impossible. But here are a few tips:

Back in the day, I would methodically walk the convention aisle by aisle in a day to see what was what, and decide where I’d go back to later. Those days are long gone—not just because of the sheer size of the floor but because crowds and bottlenecks more often than not may determine what aisle you can walk down. 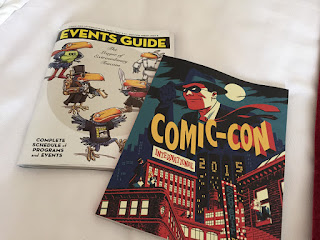 Read The Program and Schedule!

This is your bible—and, better yet, you can now download it on the San Diego Comic-Con’s mobile app! I’ve lost count of the number of people who’ve stopped at my table each year asking me how to find a booth number or company—look in the damned program that you were given when you walked in! (I’m always courteous and helpful, but I’d make a fortune if I made people buy something before I helped them!)

Invest in a Battery Charger

If you’re going to be out all day, your mobile phone will run out of juice—especially if you plan to take photos and post to social media all day, which can quickly drain your device. I actually invested in a heavy duty one that can make up to six charges when fully charged and it is one of the best investments I ever made. It’s nice to be able to not have to worry about running out of juice (or have to ration use to preserve battery power since I’m out pretty much all day). And, by the way, buy it online, it’s a lot cheaper!

Like everyone else, I recommend comfortable shoes and some kind of bag/backpack for carrying gear and your goodies. But also bring a small- to mid-size poster tube (some of the “higher end” ones have a shoulder strap). Free promotional posters are often distributed and you’ll find yourself at a loss how to keep it in good shape. And if you forget to bring one, don’t worry—there are art supply vendors at the show who sell them, as well as other things you might forget like a sketchbook, pens and markers (to request autographs and sketches).

Everyone has different priorities when it comes to food at Comic-Con—many people simply eat on the go to make the most of their time at the show, whether it’s granola bars or trail mix you brought in yourself, or a hot dog purchased at one of the many stands at the convention center. Personally, I like a good meal, especially given the marathon nature of the show, so I give a lot of thought into what I am going to do at mealtime.

Either way, make sure you plan ahead—the food at the convention center is both overpriced and mediocre (the one shortcoming, in my eyes, of the show), and the convention center is relatively isolated from other food options nearby. With that said, if you’re willing to make the effort and take the time, you can get a much better meal either by visiting one of the adjacent hotels or braving the crowds to cross the street into the Gaslamp District. There’s also a major chain grocery store across the street where many people stock up for the day, as well as pop up food vendors who pop up to take advantage of the hungry crowds.

As for myself, because of my looong days, I usually have a good breakfast at the hotel before I make my way to the show, try to get out for lunch just so that I can get some fresh air away from the booth, then have a good, often upscale dinner with friends afterwards to unwind and relax. In the old days, it used to be hard to find a restaurant without a long wait, but nowadays, with the proliferation of parties and restaurants, the crowds have spread out. Places are still crowded, but you can still find places where waits aren't as long as the crowds might suggest. Obviously, some places will be more popular and crowded than others, but if you go outside the main drag of the Gaslamp District by a block or two, you'll find less crowded choices. Most of the restaurants in the Gaslamp are in the mid- to upscale range, but you can still find cheaper fare and fast food too. (If you choose to enter an evening event or showing, once again, you’ll need to make some choices and plan accordingly.)

Every year, there are also more and more late night panels and Comic-Con activities. Again, you may often be torn between getting a good meal or taking part in some activity. Again, it's all about choices and good planning!

Take a Little Time for Yourself

San Diego is a great city with a lot to see, both close to the convention center and not too far away. I’m fortunate in that I live less than 2 hours away in L.A. and have gotten a chance to enjoy and appreciate this great, laid-back town during off-Comic-Con times.

No doubt you’ll want to spend as much time taking in the show, but if you’re up for it—or need a break—explore the city a bit. Even the marina area behind the convention center is relatively calm and peaceful during the show since everyone is at the convention!

Those are some of the basics. Just remember to go with the flow. At the end of the day, Comic-Con feels like a big, exhausting party and definitely sensory overload. All things considered, especially given the numbers of people there, you have to give credit to the organizers for putting on a show that is as smoothly run and well organized as this.