The More Things Change… A Review of the Great Game 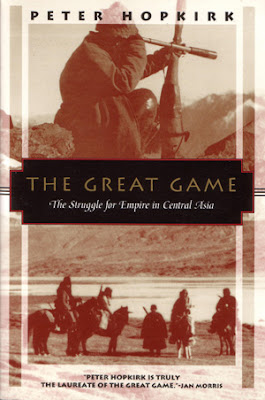 Awhile back, I read the Great Game: The Struggle for Empire in Central Asia by Peter Hopkirk, about the imperial struggle for control of Central Asia between Great Britain and Russia, from the late 1700s through the early 20th century, which I have been meaning to review.

Reading this book underscored the fact that over the centuries, Russia’s basic foreign policy hasn’t changed much. Made understandably paranoid by a host of incursions and invasions over the centuries, Russia has historically sought to create a protective buffer between its borders and the powerful nations of Europe, particularly Great Britain. This policy also aligned with the varying ambitions of the Tsars to expand the influence of the Russian empire, with the main goal of procuring for itself India, the crown jewel of Great Britain’s empire.

The playground for this struggle was Central Asia, particularly Afghanistan and Persia. It was a heady time for adventurers, spies, diplomats, military officers and opportunists who sought to make a name for themselves, with individuals on both sides trying to ingratiate themselves and/or blend into the local populations. While both sides used equal measures of chicanery and outright bribery to win over various warlords and potentates to their side, by the same token, the Russians and English were often expertly played against each other by these same people for personal and political gain, with parties often changing sides on a dime. (It should be noted that my one complaint about the book is the occasional subtle but otherwise clearly racist and jingoistic view of the author, who often refers to the various peoples and tribal leaders encountered by both sides in terms that used to be often used to describe "orientals," as being treacherous and devious.)

While referring to this geopolitical power struggle as “The Great Game” suggests a political and strategic chess match between east and west, the risks, of course, were very real. The book is full of great feats of courage, bravery and diplomatic victory, as well as many instances of massacre and horrific, lonely ends.

While these “games” needed to be “played” in order for each side to counterbalance the ambitions and incursions of the other, at the end of the day, the sum total gains of either side doesn’t seem to have amounted to much. Ultimately, the Great Game ended not due to any particular action by the British but rather as the result of a succession of decisive defeats at the hands of the Japanese in 1905 during the Russo-Japanese War. The near-complete dismemberment of Russia’s army and navy by a newly emboldened Japanese militarist government not only exposed Russia’s weaknesses, it dampened the country's ambitions due to the internal political strife and economic instability that the devastating losses brought to the country and the Tsar. Although the Tsar attempted to regroup, the humiliation no doubt was one of the missteps that would lead to Tsar Nicholas II’s forced abdication and eventual execution in 1917 and the rise of the Soviet Union.

It’s impossible to read this book, of course, without seeing it as a precursor to the Cold War between the Soviet Union and the West, as well as current world events in which Russia has begun to more aggressively assert itself, particularly in the annexation of the Crimea from Ukraine. (As I was finishing this piece, Russian Federation President Vladimir Putin had announced his intent to suspend the nuclear pact with the U.S. over ongoing diplomatic rows.) Russia has a long history (and a long memory to match) and the country—particularly under its current leadership—is intent on recapturing its former glories and correcting the indignities and humiliations it feels it has suffered at the hands of the west over the past centuries. Anyone needing to understand the Russia of today—including the diplomats and negotiators who deal with that country directly—would probably greatly benefit from reading this book.