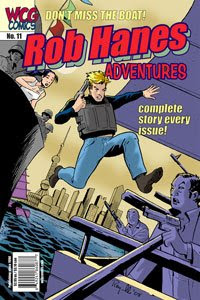 As noted in a previous post, my oversize 11 x 17 Mustek scanner of nearly 9 years died in action just as I entered the home stretch of finishing issue 11 of Rob Hanes Adventures. Replacing it turned out to be a more arduous task than I expected. Although I ordered the correct scanner online—an older Mustek model, the A3 USB, that was compatible with my Windows 98 system—upon delivery I immediately noticed that the merchant sent me the newer A3 1200 Scan Express Pro, which is not Win98 compatible (sue me, I'm a dinosaur—but why fix what ain't broke?).

Although the merchant did work conscientiously to correct the problem by making a direct exchange, the snafu set me back further in my schedule. Fortunately, the manufacturer still had a few of the discontinued models still in stock, which it shipped to me. But when I opened the box upon delivery, I discovered that it was missing the power adaptor plug!! The manufacturer agreed to send me the missing adaptor, but that set me back another few days. Once I received it, I got the scanner up and running in no time and am now back in business.

Above right is one of the first products of the new scanner—I was finally able to scan the cover to Rob Hanes Adventures #11 and begin coloring it. Click on the image to see it full size.

And, of course, to see a fuller preview of the upcoming issue, click here.
at 9:00 PM Posted by Randy @ WCG Comics 0 comments

I recently completed the art to the next issue of Rob Hanes Adventures (#11), but the fly in the ointment is the fact that, as reported at the end of last month, my scanner died, which has effectively stopped me from being able to complete the issue for now. I’m currently awaiting the arrival of its replacement—I had purchased a new one shortly after the other one stopped working, but received a scanner different than the one I had ordered, so I’m currently in the process of exchanging it.

Meanwhile, I’ve updated pages 15, 17 and 18 from the issue at my previews page. (Please note that I’ve moved my preview site to my ComicSpace account. Might as well take advantage of the free storage space!)

On other update fronts, Comic-Con International (CCI) has confirmed my small press table at the San Diego comics convention July 24-27, 2008. You’ll be able to find me at the same booth I’ve occupied the past three of four years, at Booth S14 in the Small Press Area—more information to come about the show as we get closer to the convention.

Then in the next few weeks, I’ll be posting my contribution to this year’s CCI San Diego souvenir program—a tribute to the 25th anniversary of American Flagg!

To whet your appetite, below is my published contribution to last year’s program—click here or on the image to see it full size.