More from My Collection...

Email ThisBlogThis!Share to TwitterShare to FacebookShare to Pinterest
Beginning in high school—but especially when I was in college in the 1980s—I collected quite a few movie posters, many of them full size. Though most were of films I liked personally, there were also a few I purchased solely on the strength of the image or design.

Over the years as I moved and got older (and married), many of these pieces were stored away in poster tubes. In recent years, however, as I gained more wall space due to a new home, studio and office, I began bringing out a few of my favorite pieces and framing them for display.

I thought I'd share a few of my favorites....


The poster of Inglorious Basterds below is obviously a recent acquisition and the first movie poster I've purchased in more than a decade. Though I'm sure I saw the poster at the time of the film’s release, the boldness of the one-sheet size version of the poster pictured below stopped me in my tracks at a clothing design exhibition where it was on display to accompany costumes from the film. I ordered it online shortly afterwards—although the design is very simple, I find it very striking visually. (I love Pitt's expression on the poster, which perfectly captures his terrific performance in the film—Pitt does a great job of making the character almost cartoony (in a good way) while still keeping him "real" and believable.) 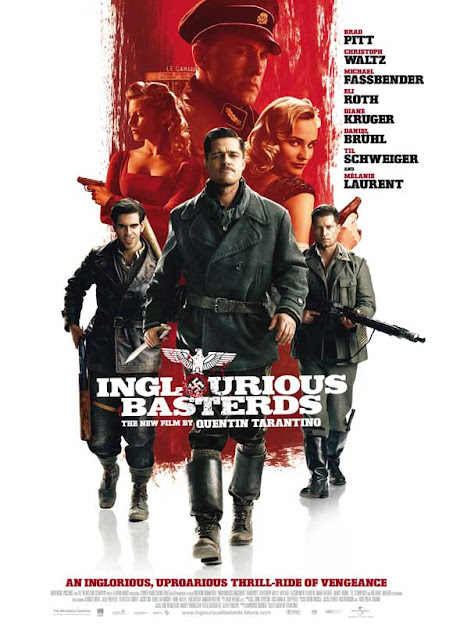 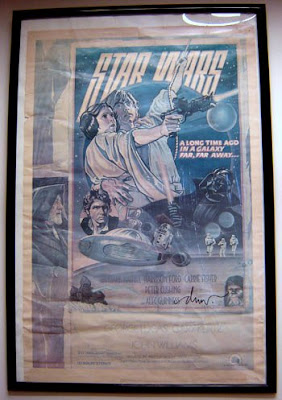 At right is a real personal favorites–however, the poster wasn’t produced for the film per se, but rather for the sound track! (If you look at the list of credits, aside from the actors, the most prominent names listed are writer/director George Lucas, producer Gary Kurtz, and composer John Williams.) I presume the poster was released commercially purely on the strength of the art. If you look closely, it’s done in a trompe l'oeil style, and painted like a faded posterbill peeling off a plywood fence.

The poster is also significant because it is by artist Drew Struzan, one of the last of the great movie poster artists, responsible for iconic posters for the Indiana Jones films, Back to the Future, Star Wars, etc.

Years later, when I met the artist at a local cartooning event, I even got Struzan to autograph the poster—you can see his signature ("Drew") in the lower right, next to Chewbacca's head. 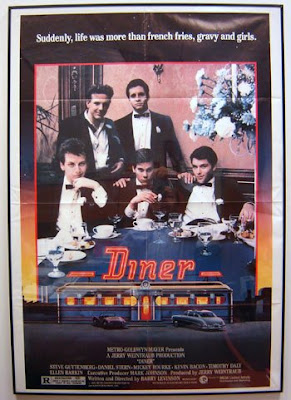 The film Diner and its poster has always been a touchstone for me. I saw it three times in the span of about a week when it was released! The film practically invented the term “sleeper,” coming out of nowhere and making a huge splash when it was released. (MGM originally did not want to release it until Pauline Kael wrote a glowing review of it.)

Indeed, over the years as my college buddies and I have gotted married, it's become a tradition to re-create this pose at our weddings!

This was one of my first poster purchases, based on both my admiration of the film and of the movie poster itself. 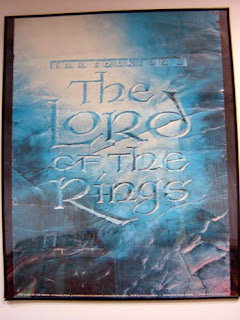 The poster at right dates back to my high school days—it’s for Ralph Bakshi’s 1978 animated film adaptation of J.R.R. Tolkien’s Lord of the Rings trilogy.

Though the film is not well regarded—especially in the aftermath of Peter Jackson's faithful and admired adaptation—I think it has its moments. In fact, I’ve always felt the character design was one of the animated film's great strengths. (Indeed, Jackson has acknowledged that Bakshi's film was his introduction to the trilogy and I'm not the only one who's noticed some of the near shot-by-shot recreations between this film and some of the scenes in Jackson's Fellowship of the Ring.)

Unfortunately, Bakshi didn’t have the money to complete the entire trilogy, nor even to truly complete the film. Perhaps partly due to the lack of funding, the movie often relies too heavily on rotoscoping, to the point of the characters sometimes abruptly going back and forth from being on character and looking like poor photographic xeroxes.

But regardless of what you may think of the film, I find this to be a simple yet evocative poster teaser that captures the atmosphere and mood of the trilogy. 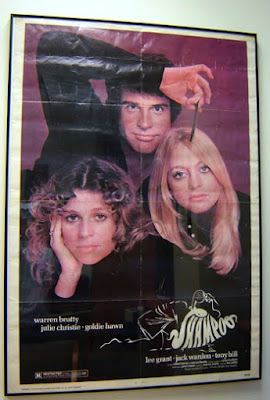 At left, is the poster for Shampoo.

I believe the photo for this poster was taken by famed photographer Richard Avedon.

I've always admired this film, but I primarily purchased the poster for what I think is a very striking and eye-catching image.


The poster below was a foldout pullout from Prevue magazine, produced by Drew Struzan, who also is the artist for the above Star Wars poster. The poster accompanied an article about a proposed Terry and the Pirates film that obviously never got off the ground. I got Struzan to autograph this poster for me as well. The article itself was well done

Over the years, there have been various attempts to bring Terry to the screen, which includes an unproduced screenplay by cartoonist/screenwriter Jules Feiffer and a version that the late actor Robert Culp tried to get off the ground (as recounted in this blog here).

Because of the poster's odd size (about 12"x38"), I haven't yet framed this, but hope to one day! It's a wonderful piece that pays an homage to both the original series and, in the style of art, magazine cover artist J.C. Leyendecker! 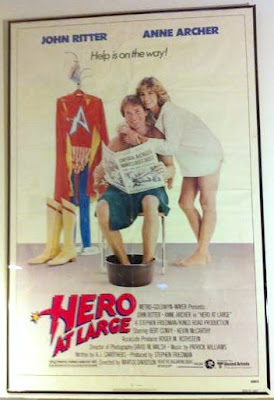 At right is the poster for a little-known/little-seen film, Hero at Large, starring John Ritter and introducing Anne Archer, from 1980.

This is a very human-scale, romantic comedy about a struggling actor in New York named Steve Nichols (Ritter) who makes promotional appearances at movie theaters for a movie character based on a (fictional) comic-book character, Captain Avenger. One evening, Nichols serendipitously breaks up a robbery while in costume after a gig. After the media picks up the story and inspires the city, Nichols actually tries to begin fighting crime in costume. Archer plays Ritter's love interest.

Obviously using the Christopher Reeves Superman films as a jumping off point, this otherwise is a very down-to-earth and human story that has a lot of heart thanks to Ritter's easy, likable charm.

I've always had a soft spot for this movie—in part because of the obvious comic-book connection. It finally was released on DVD in 2005. (If you want to know how dated it is, it co-stars Bert Convy!)
at 5:50 AM Posted by Randy @ WCG Comics 2 comments