An Evening with Howard Chaykin 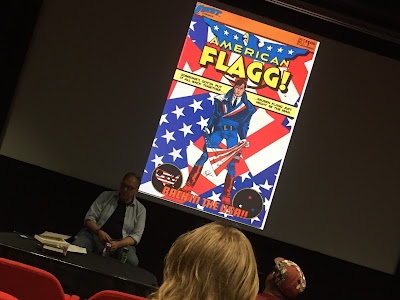 I’ve blogged here before about one of my favorite cartoonists, Howard Chaykin. On September 19, I had the opportunity to see him speak at a class on comics that was open to the public at the Art Center College of Design, a lovely campus nestled in an upscale residential area in Pasadena, CA, next to the Rose Bowl. Chaykin spoke at length about his career and the craft of creating comics.

Known for speaking his mind, Chaykin did not disappoint—but he was also charming, blunt and straightforward about the realities of working professionally in the creative arts/entertainment/comics field, which no doubt was of interest to the students in attendance. (About half the audience were students, the rest fans (and friends) of Chaykin like myself.)

Chaykin is a unique presence in comics because, as he points out, he falls in a gray area of the market that is not mainstream superhero comics per se but not truly alternative either—a trait I feel my work shares as well. He also often likes to claim that he’s never considered himself as naturally talented or technically gifted as many of his peers—as such, to compensate, and the fact that he has to compete against people much younger than himself (during the talk, he often humorously pointed to the students in the audience when making this point), he said he works his ass off and also periodically reinvents himself every few years so as to avoid being typecast or stale.

As a result, Chaykin has enjoyed a diverse, steady career and living—47 years, including a 15-year detour into television, which he said provided him with the financial safety net to work in comics. He mentioned that he was happy with where he was at this stage in his career because he gets to work on his own projects that have meaning for him. 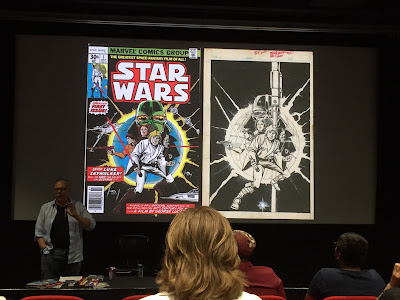 While the event focused initially on some of his more iconic work, such as American Flagg!, Chaykin made clear that he was equally proud of his current work; the presentation did eventually turn into an overview of his career from Star Wars (work he doesn’t feel highly about, noting that it was released just a little before the royalty system at Marvel Comics was established, which he estimates could have netted $3–4 million) to Flagg, Time Squared (which he referred to as his favorite, most personal work), Black Kiss, to his more current work, including Divided States of Hysteria and Hey, Kids! Comics!

When Chaykin also touched on the subject of comics craft and storytelling, he was very thoughtful and insightful. He talked about his love of graphic design and patterns (which is indeed one of his great distinctive strengths), noting at one point how small panels often served as an exclamation point to stop the reader in their tracks. He also spoke about some of the innovations he introduced to the “language” of comics, which he believes he hasn’t always been given full credit for, which I believe is an accurate assessment. While I don’t entirely agree with his assertion that most comics readers are unaware of his work, Chaykin in many ways is indeed a classic “artist’s artists” who has influenced many of the cartoonists who have followed.

His talk was followed by an extensive Q&A. Afterwards, I had him kindly sign a Flagg trade paperback collection I had brought along for that purpose. I reminded him that I had recently done a Rob Hanes Adventures cover that was inspired by the first issue of Flagg (which he saw on Facebook) and we had been introduced years ago by a mutual friend—he was kind to say he did remember me. When I said I was sure everyone knew the inspiration for my cover, he responded with a sardonic chuckle, "Were you listening to my talk?", referring to the lack of awareness most mainstream comics fans have for his work.

Below are additional photos from the event. 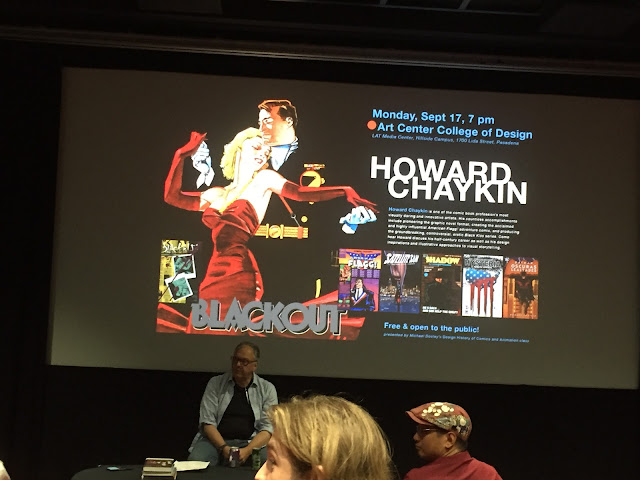 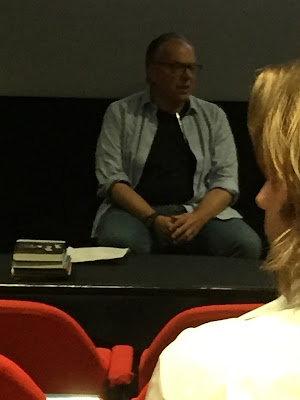 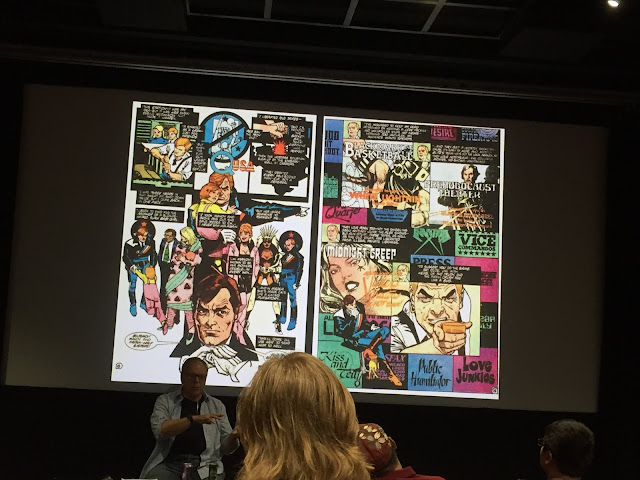 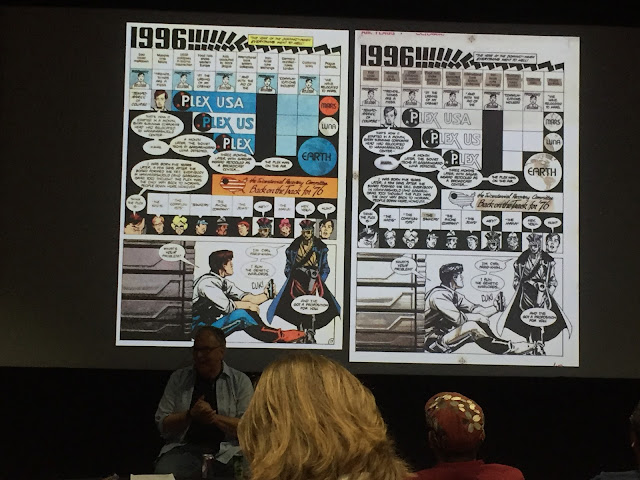 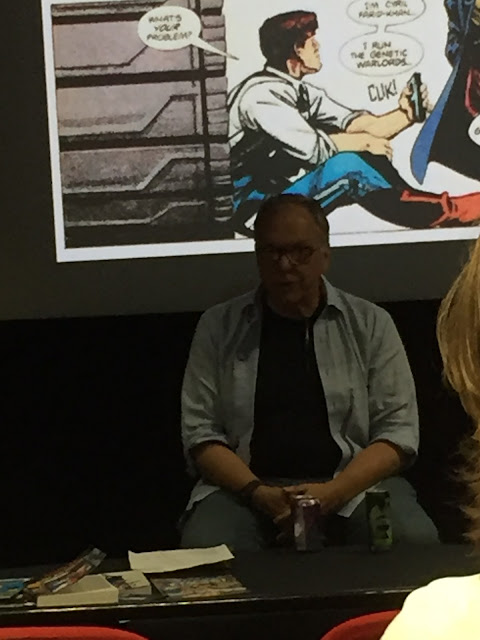 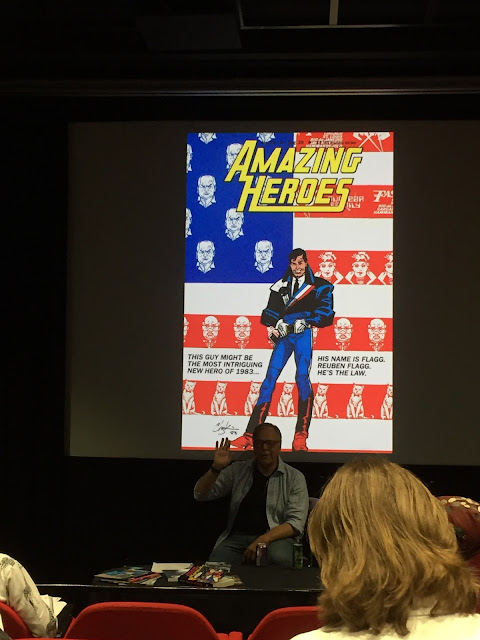 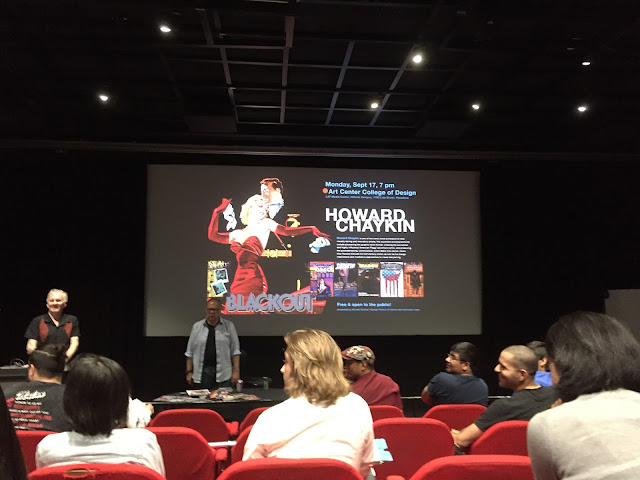 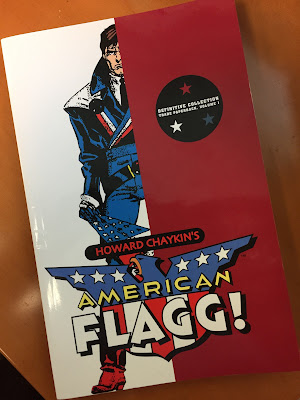 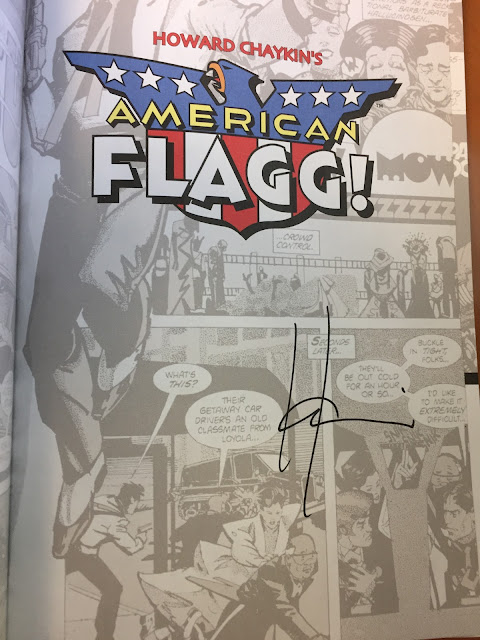