A LOOK BACK: American Flagg! 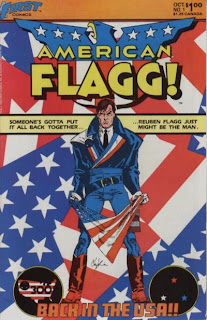 I was attending UCLA in 1983 when American Flagg! debuted. While I can’t recall specifically what comics I was reading at the time, aside from some early black and white titles that signaled the start of the independent comics movement like Cerebus, Elfquest, and Love and Rockets, there wasn’t much in the mainstream that I can recall particularly inspired me, though I had discovered the direct market just a few years earlier.

Then along came Howard Chaykin’s American Flagg! This year marks its 25th anniversary.

It’s probably the single series which reignited my passion for comics and which showed me that comics like my own that did not solely feature superheroes in tights were a viable alternative in the new direct comics market. 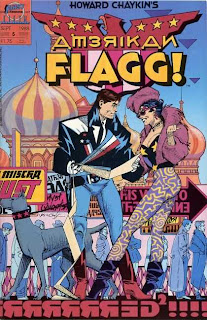 While Chaykin’s aesthetic roots are firmly planted in the pulps and mainstream comics, this certainly was a series that was truly all him, which reflected his own sensibilities and views. Flagg featured a strong author’s point of view, and featured a unique blend of science fiction, satire, and mature themes. Chaykin created a rich setting environment for his near-apocalyptic tale of consumerism and the corporate state run amuck. (It also should be noted that Chaykin also considered Flagg to be a comedy.)

Of course, like all great comics, while the concept and story were outstanding, the art brought it to a whole new level. With Flagg, Chaykin’s strong sense of design came to the forefront, punctuated by his effective use of Duoshade.

Flagg was a comic-book series that I eagerly anticipated each month, and one for a long time I continually pored over for both study and inspiration. 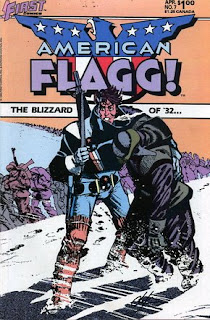 Though the series continued for several more years after the first 12-issue story arc, Chaykin—never one to linger and always with his eye on the next project—eventually lost interest in the series and at different times during its history turned it over to other artists and writers. For the most part, my interest gradually cooled in the series as well. Nevertheless, in its first few years, Flagg completely reinvented the form for me showing how much more could be done in monthly comic-book format. Flagg still brings back terrific memories of my college days and of an exciting and inspiring time to be part of comics. 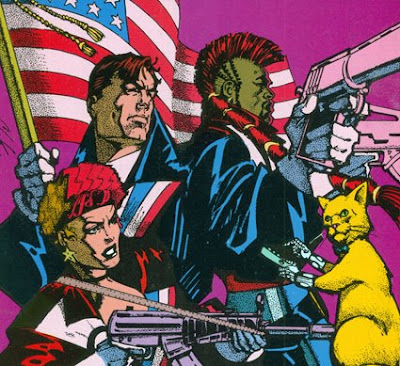