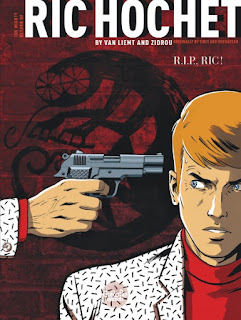 Note: this review contains a minor spoiler alert and is based on the Kindle digital edition of the graphic album.

On Twitter last year, someone from France who was new to my work asked if I had ever heard of the French comic-book series, Ric Hochet, created by artist Tibet (a pseudonym for French cartoonist Gilbert Gascard) and writer André-Paul Duchâtexau, as my work reminded him of that series, which focused on the adventures of an investigative reporter for a French newspaper.

I was able to say I was vaguely aware of it, but the query led me to look up editions translated into English. Though the series was created in 1955—with 78 graphic albums published to date—no English editions were available except for one: Ric Hochet, Volume 1: R.I.P., Ric!, an English language edition released just a few months prior in June 2017 (the original French edition appeared in 2015). However, the album seems to be part of a re-booted new series by another cartoonist, Zidrou, following in the footsteps of the original creators. (A postscript at the back of the edition notes, “The story and all the joy we felt in creating it are dedicated to Tibet.”)

While of course it’s hard to tell if the story is representative of the series or a sort of post-modern take on the original since I have not seen earlier stories, it was a great read—a sophisticated adventure/mystery that felt very classic, tying in with the series’ past continuity and building on its supporting cast of characters, including villains. 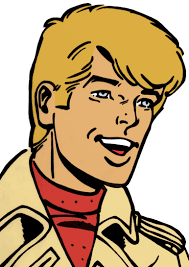 Minor spoiler alert ahead: In fact, in retrospect, the only somewhat interesting choice of first story in this re-boot is the fact that the lead character, Ric Hochet, doesn’t actually appear much—the story, instead, focuses on the inner journey of a villain called “The Chameleon” from a past adventure (“The Chameleon’s Shadow”) who, using plastic surgery and his gift for impersonation, assumes Ric’s identity and life as part of an elaborate scheme of revenge and to destroy the reporter’s life and reputation. (I call this a “minor” spoiler alert since the conceit is revealed pretty much in the opening pages.) So the majority of the story is, in fact, told from the Chameleon’s point of view which, of course, cleverly reveals (and upends) aspects of Ric’s personality and history. We learn, for example, that Ric is a “boy scout,” so the Chameleon uses his charms to gain personal benefits and advantages Ric never did, at one point seducing the daughter of an old friend.

Again, without being completely familiar with the series, it’s difficult to know whether this approach is some clever meta-commentary about the author’s own attempt to capture the tone and feel of the original series. But aside from this conceit, the story seems respectful of the source material and told in a straightforward, unironic fashion. Regardless of whether or not this is reading too much into the story, “R.I.P., Ric!” is a fun and compelling read. I hope to see more of the original series or new stories available in the future.

Note: Since originally writing this review last year, I have since learned that two more new English-translated adventures from the series have dropped at Amazon.

Below: Additional samples of the series past and present. 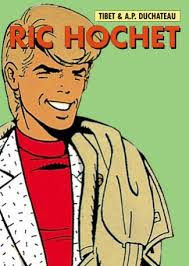 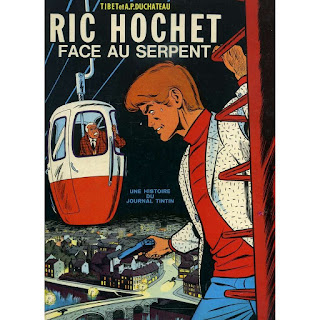