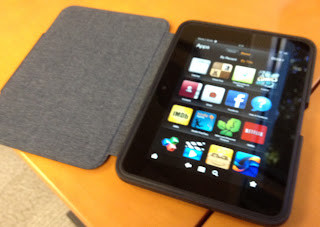 Between owning an iPhone and a laptop (as well as a desktop iMac), I have felt little need for a tablet. In recent months, however, my interest in having an ebook reader that would also allow me to read digital comics piqued my interest. Since I purchased a Kindle for my wife last Christmas, who was very happy with it, I thought I’d get a color Kindle Fire HD. As I was just about to make my purchase, however, news about the iPad Mini broke, which put my plans for the Kindle Fire on pause -- I decided to wait to see what Apple would have to offer....

Like most other people, however, the Mini turned out to have too high a price point at $325, compared to the Kindle Fire HD’s $199. I also realized that since I already own an iPhone, a traditional tablet like the iPad Mini was redundant. I felt it preferable to get something that complemented my iPhone rather than essentially duplicated it by getting a more dedicated e-reader. At the last minute, I also did comparisons with the Nook and the Google Nexus since they were priced the same. I ruled out the Nook since Barnes & Noble’s future seems uncertain and the Nexus because it was primarily a tablet and, secondarily, an e-book reader. So, in the end, I settled on the Kindle Fire HD. 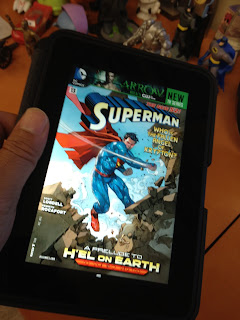 Having had the Kindle a couple of weeks now, I must say I’m happy and impressed. With its built-in wifi, it turns out the device is robust and has more of the features and capabilities of a traditional tablet than I anticipated: I connected to my email, calendar and contact list accounts with no problems; it has a web browser; I downloaded many of my existing personal finance apps on it like Mint and ClearCheckBook; it can stream Netflix, YouTube and other videos—I can even stream them to my TV using a mini-HDMI connector; and, apparently, it can even run Skype for videoconference calls!

I've already downloaded several books and magazines, as well as several digital comics, which look great on the high-def color screen. With its 7-inch screen size, the Kindle is light, portable and easy to carry around.

Having said that, it’s important to note that the while the iPad Mini and the Kindle Fire HD certainly overlap and compete in many areas, they also fill very distinct niches. As I said earlier, I primarily wanted an e-book reader, with apps (and especially gaming, which is where other traditional tablets excel) a low priority. The reviews are right on: you really need to make a decision based on your needs. As I said, since I already have an iPhone, an iPad would have been a bit superfluous, so I'm glad I got what is primarily a dedicated e-reader that also performs nicely as a traditional tablet on the fly. The Kindle, of course, is also closely tied to Amazon's content and the user’s Amazon account, but that wasn't an issue for me since I already purchase regularly on Amazon.

While it may not fit everyone’s needs, the Kindle Fire HD is a great product.