Reviews: Gentleman's Guide to Love and Murder/West Side Story

Email ThisBlogThis!Share to TwitterShare to FacebookShare to Pinterest
Below are reviews of two recent musicals my family and I saw on stage this past year...

A Gentleman’s Guide to Love and Murder

I first caught this show in April 2016 in Los Angeles with much of the original Broadway cast intact, but when the touring production returned last February to the Segerstrom Center for the Performing Arts in Orange County, my wife and I decided to take our children. So this is the second time I’ve seen it!

Winner of the 2014 Tony for Best Musical, “A Gentleman’s Guide to Love and Murder” is closely based on the 1949 Ealing British black comedy film, Kind Hearts and Coronets, which itself is loosely based on a 1907 novel called, Israel Rank: The Autobiography of a Criminal by Roy Horniman. (For some legal reason, the musical did not have permission to use the same title, so it is officially based on the novel, though it hews closely to the film.)

Set in Edwardian England and considered a skewering of the upper class, “Guide” is a crowd-pleaser of a musical about an estranged member of the prominent D'Ysquith clan named Montague "Monty" D'Ysquith Navarro who—both out of greed and the poor treatment of his late mother at the hands of the D’Ysquith family who disinherited her when she chose to marry a musician below their station—proceeds to kill all those in succession before him when he discovers that he is tenth in line to the family’s title position of the Earl of Highhurst. He does so in ingenious clever ways to make the deaths all look accidental, leading to grisly and funny deaths that are hilariously portrayed using clever yet simple stagecraft.

Adding to the fun of the show is the fact that a single actor portrays each member of the D’Ysquith clan murdered by Navarro (including the women). The conceit parallels the same feat performed by actor Alec Guinness in the 1949 film. Each member of the family, of course, has their own unique eccentricity, which no doubt makes the role an actor’s delight. The show’s music is fitting reminiscent of a Gilbert and Sullivan operetta. In addition to the tension of whether Navarro will get caught, there is also a love triangle involving a lover and a cousin.

The children loved the show.


Many people are no doubt familiar with the classic 1961 film adaptation of "West Side Story," co-directed by Robert Wise and Jerome Robbins, adapted from the iconic 1957 Broadway show by Arthur Laurents (book), Leonard Bernstein (music), Stephen Sondheim (lyrics), and Robbins (concept and choreography), which was inspired by William Shakespeare's “Romeo and Juliet.” Nevertheless, live performances are a beast unto themselves so it is always a treat to watch a well-known show, particularly when the film adaptation differs from the play.

This touring production was put together by the La Mirada Playhouse and my family and I saw it as a Saturday matinee at the Valley Performing Arts Center at California State University, Northridge. My son had recently discovered the film and very much looked forward to the show.

This is a fine production—it says much about the power of the story and the music that I found myself tearing up at some moments, particularly when Tony and Maria first meet. All the actors—particularly the leads—had beautiful voices, though it probably helped that the mics ensured they played to the back rows.

With that said, I found the first half of the production serviceable, with everyone hitting their marks but not quite transcending the material. That changed in the second half, however, after intermission—both the actors and the production seemed to then fully embody the story and the music. The second half was powerful and effecting. Kudos to the leads, and main supporting players, who provided some of the lighter moments in this otherwise sad and tragic story.

A Visit to Universal Studios Hollywood

Click here to see the full photo gallery of my April 2017 visit to Universal Studios Hollywood. 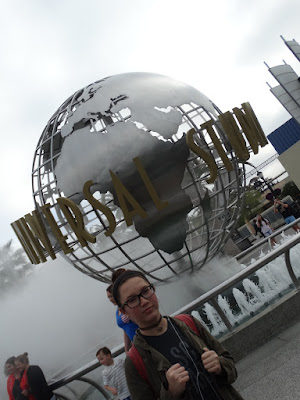 While Universal Studios Hollywood in many ways competes in Southern California with the likes of Disneyland, Knotts Berry Farm, Six Flags Magic Mountain, and Legoland for families and thrill seekers, it has the distinction of also being a working film and television studio. So in addition to the rides and attractions, Universal also appeals to fans of television and movies, and those interested in seeing the industry behind the scenes.

Though not as often as Disneyland, I’ve visited Universal several times over the years. One of the first times was when I vacationed in California with my family in the mid-1970s while we still lived on the east coast; again in the late ‘70s on a road trip with my brother and east coast friend after we moved to Northern California; then, after I re-located to Southern California for college and work, at least once during the ‘80s, and more recently, several times over the last decade when I’ve visited with my own young family.

At first glance, the studio still feels quite familiar, particularly the tram tour. I always get a kick out of being on studio lots—I’ve walked around the Warner Brothers lot thanks to a friend, and have been on the Culver Studios, Paramount Studio and Fox Studio lots on business or for screenings. (Ironically, I've never been to Sony Studios—formerly MGM—though I live right down the street from the lot!)

In fact, the Universal backlot remains so recognizable to me that, in just the past few months, I've spotted its locations in shows like Netflix's "Love" and TBS's "Angie Tribeca." 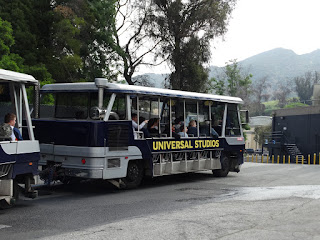 On the tram tour, it's comforting to see some of the same “greatest hits” after all these years still entertaining visitors, such as the Jaws shark “attack” and Alfred Hitchcock’s Psycho house, as well as the famous “flash flood” attraction. And I’m glad they still take the time to show off the studio’s history, pointing out landmarks like Hitchcock’s office bungalow and the places where Universal’s early monster films and westerns were filmed. But make no mistake, portions of the tour have also been upgraded and re-imagined. For example, a memorable part of the tram tour back in the day was a wooden bridge that broke apart and shook as you crossed it to simulate an earthquake, complete with (styrofoam) boulders that came barreling down the hill. This was later transformed into some ice tunnel attraction that I vaguely recall; today, it is the impressive King Kong 360 degree 3-D attraction where guests are transported to Skull Island to watch Kong do battle with a dinosaur with the tram riders in the middle of the action. They’ve also added a similar 3D Fast and the Furious attraction, which impressively features several of the film’s stars.

Live attractions and shows related to the magic of movie-making have also always been part of the experience. Again, this has evolved much over the years—I recall a live show that selected audience members to participate in filming sequences from Airport (complete with a water tank). There used to be an Old West stunt show that is now a Waterworld stunt show. Today, the park offers entertaining special effects and animal shows in small arenas. 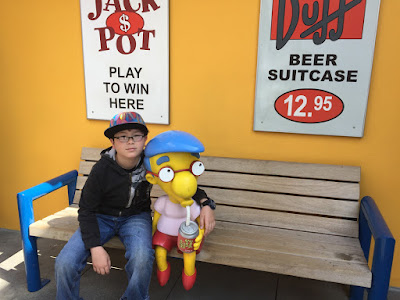 However, while the tram tour and live shows related to the magic of movie-making used to be the core of the Universal Studios experience, over the last decade or more, Universal has worked to expand its appeal by adding more traditional amusement park rides and theme areas, based of course on a Universal (or other) popular entertainment franchise. So in addition to thrill rides like Jurassic Park (a water ride), the Mummy, Transformers, and Shrek, we now have the Wizarding World of Harry Potter area and a Simpson’s Springfield area that expands on a smaller, previously existing Simpson’s Krustyland. (They’ve also added a "Walking Dead" attraction, building on the very popular Halloween scare nights during the Halloween season.)

The Wizarding World of Harry Potter opened to great fanfare and anticipation in 2016. It’s an immersive environment that features a snow-covered village from the Harry Potter series dominated by Hogwarts Castle. (Construction of the themed area required the destruction of the Universal Amphitheatre, a concert venue I visited several times over the years.) Rides in the themed area includes a magic motion Forbidden Journey ride and a Flight of the Hippogriff kiddie rollercoaster. 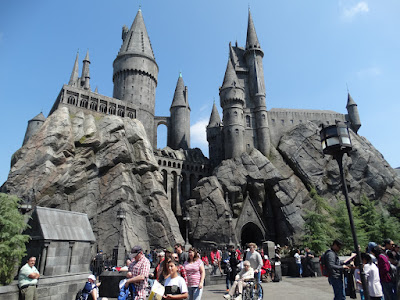 Also relatively new is the Simpson’s Springfield land, which expands on a smaller footprint that included a Simpson’s ride and Kwik-e-Mart. The area has been expanded and features Moe’s Tavern, a Krusty Burgers fast food restaurant (where the food was a lot better than I expected), a Lard Lad Donut Shop, and tons of details that bring the Simpsons’ city of Springfield to life.

Unlike Disneyland, which can easily keep you entertained for a full day and more (especially with its sister park, California Adventures), I usually was ready to leave Universal after about three-quarters of a day. The expansion and new additions now makes it a fuller day. And don’t forget to visit the Universal City Walk right outside the main entrance, with plenty of fun shops, restaurants, and a movie theater complex.

For the full photo gallery of my visit, click here.
at 7:06 PM Posted by Randy @ WCG Comics 0 comments