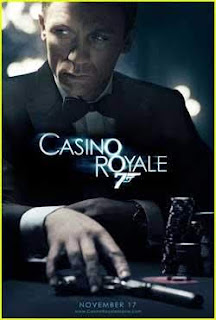 One of my earliest movie memories is seeing the James Bond films Thunderball and You Only Live Twice on a double feature in a theater with my parents. So I imprinted on the character at an early age.

Though I'm a fan of Pierce Brosnan's Bond, I certainly understood the need to re-invigorate the franchise for a modern audience. Brosnan brought physicality and charisma back to the part (and when called for, a sense of brutality part), but the movies had gotten too bloated with special effects and big set pieces; I even thought the trademark pithy bon mots that Bond delivered after dispatching a villain were getting a bit stale and tiresome. (Mind you, I fault the filmmakers and screenwriters for this, not Brosnan--shortly before Brosnan was let go, there were reports of Brosnan meeting with Quentin Tarantino about how to spice up the next film.)

Since Casino Royale --the latest re-boot in the series--is so fresh in my mind, it may be too soon to rank it with other Bond films. But I do think overall this ranks up there among the best and most substantive in the series, certainly in recent years. And the newest Bond, Daniel Craig, is certainly the most brutal and physical of the Bonds--I don't recall seeing a Bond this sweaty or bloodied as this one. But he also gives as well as he gets, and it's probably this aspect of the new film that made the biggest impression on me. The humor is still there, but it has more to do with Bond..s bravado than the kind of winking to the audience one often got from some of the other Bonds (even Brosnan to an extent.)

The filmmakers' other main aim with Casino Royale was to give the character some emotional resonance. In this department, too, they have done a good job. The question is whether they will be able to carry this over into the next films.

Perhaps another problem with the Bond films in recent years was the need to raise the stakes so high that their plots became too unbelievable and two-dimensional. While they made for good popcorn movies, they disappeared from one..s mind quickly after leaving the theater. The Bond films that hold up the best for me are the ones that are the most grounded in reality: for these reasons, From Russia With Love and For Your Eyes Only tend to rank among my favorites (along with the early Bond films like the above mentioned Thunderball and You Only Live Twice when the series was on the cutting edge of coolness and chic). Casino Royale falls into this category as well, with Bond dealing with terrorists.

While I was fairly confident there was little doubt that Bond would continue to entertain audiences well into the 21st century, the future of the series seems to be in good hands with Craig.
at 12:33 AM Posted by Randy @ WCG Comics