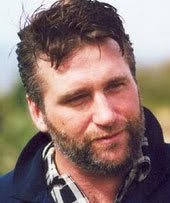 Living in West Los Angeles as I do, I've encountered many celebrities both major and minor over the years while I've been out and about. These have ranged from Sean Connery (the day before he won his Academy Award), James Woods (several times!), Pierce Brosnan, Jamie Lee Curtis, Andy Richter, and others. Though I make it a point to rarely bother or approach them, I nevertheless get a kick out of it, and have made a habit of keeping a list of who I've seen. I'm actually planning to post the list soon, so keep tuned. Anyway, here's the latest such encounter…

Nearly every Sunday, my family and I have breakfast at a restaurant next to the Santa Monica airport. This past Sunday as we were seated, I took note of the couple having breakfast in the booth across the aisle from us but didn't give it a second thought. When my wife got up to take the kids out for a quick walk before breakfast came, however, the man started engaging my five-year-old daughter in cute conversation about a book she was carrying. He then spoke with my wife and I a bit, kindly telling us how the kids were a beautiful combination of my wife and me.

The minute he spoke, I instantly recognized him--it was actor Daniel Baldwin, the eldest of the Baldwin brothers!

Given recent personal issues he's gone through as reported in the media, my wife and I agreed afterwards that he looked great. I've always liked Daniel Baldwin, esp. when he was on Homicide, so it was a nice experience meeting him--and, of course, having him graciously complimenting our children certainly didn't hurt!
at 11:50 PM Posted by Randy @ WCG Comics