Email ThisBlogThis!Share to TwitterShare to FacebookShare to Pinterest
The following announcement was recently distributed to my e-newsletter list: 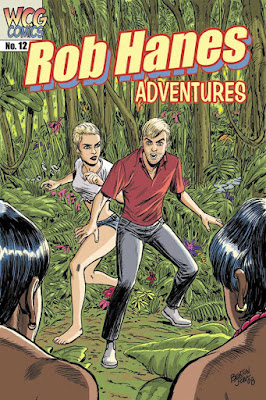 The 12th issue of the long-running, critically acclaimed action-adventure series, Rob Hanes Adventures, is now in solicitation from Haven Distributors and scheduled for release to retail comic-book stores in July! (Haven item #ROHAWCG012.)

Purchase the issue at your local comic-book store by asking your retailer to order Rob Hanes Adventures #12 through Haven Distributors. (Note: To encourage readers to order the issue through their local retailer, the issue's availability online at the WCG Comics website and other sources will be delayed by at least a month.)

In the self-contained full-length issue, Justice International agent Rob Hanes is hired to extradite a beautiful female felon back to the U.S. and becomes stranded with her on a desert island after their plane goes down in the Pacific. High adventure is alive and well in the 21st century—complete story every issue! Cover by guest artist Benton Jew.

The issue features a full-color cover, 24 black-and-white pages, and a $2.99 cover price.

As always, thanks for your support! There is plenty of exciting new developments slated for the series coming soon that will be announced shortly after San Diego Comic-Con, where WCG Comics will again be making an appearance.

Rob Hanes Adventures is an all-ages comic-book series about a modern-day globetrotting troubleshooter and soldier of fortune. Under the auspices of worldwide Justice International—a worldwide private investigations and security agency—Rob travels the world on assignment, facing adventure, intrigue and romance at every turn! Every adventure is complete and self-contained every issue which allows readers to jump in with any issue!

Inspired by the pioneering adventure work of Milton Caniff’s Terry and the Pirates and Will Eisner’s Spirit, Rob Hanes Adventures brings a fresh, modern-day spin to the classic adventure serial strip genre. Comics veteran Kurt Busiek, a fan of the series from the beginning, says, “Randy has done a great job of keeping alive the legacy of sophisticated high adventure that artists like Milton Caniff and Alex Toth created and perfected in comics. And he’s managed to do it by developing his own style and voice, and by keeping it fresh and modern, without making it feel or look old fashioned or out of touch.”

Series writer-artist-creator Randy Reynaldo is a Xeric Foundation grant recipient and a Russ Manning Award for Most Promising Newcomer nominee. The series debuted as Adventure Strip Digest in 1994, running for four issues until being re-booted in 2000 as Rob Hanes Adventures. A Xeric Award supported trade paperback, the Rob Hanes Archives, compiled the series' original run as a small press zine in 1996.
at 6:39 AM Posted by Randy @ WCG Comics