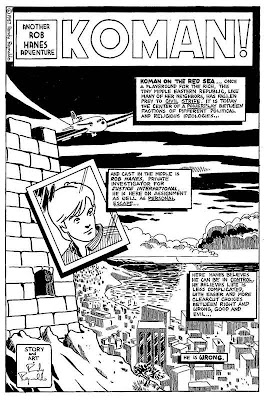 Beginning October 12, I'll be posting at my webcomics site—rhadventures.com—three stories dating back to the late 1980s that have never appeared in print until now!

In order, the stories include the introductory self-titled "Rob Hanes" (from 1986), "Loyalties" (1986), and "Koman" (1987). The first story will be posted in its entirety, and the others will immediately follow in serialized format, on a schedule of about three pages a week (Monday, Wednesday, and Friday).

These stories were the first in the series that were completed and intended for publication. They were sent on spec to potential publishers in the early days of the then-new independent comic-book publishing movement. (In fact, indie publisher Renegade Press picked up the series and had begun promoting it, but closed its doors before the first issue could appear.)

As I continued working on the series, I began publishing the completed stories as a photocopied small press fanzine titled Adventure Strip Digest in 1991. As a result of the great response, in 1994 the series became a full-size direct-market comic-book series under the same name. (The series was re-booted as Rob Hanes Adventures in 2000.)

Though most of my earliest efforts on the series appeared in the zine—which were subsequently collected in the Rob Hanes Archives trade paperback—these first three stories were never released. While I initially planned to use the stories as fillers, by the time the series was in full swing, the level of my art had moved so far along, I felt those earlier stories were no longer representative of where I was as an artist, nor met the current standards of the series. Plus, portions of the story were no longer part of continuity.

In any case, after a fan of the series recently expressed interest in seeing these early stories after becoming aware of them, I went back to the files to take a look at them. While the art, of course, is the product of a very young artist still learning his way, and I certainly would not be comfortable releasing them within my current comic-book series, I felt the work was publishable, even if just as an historical curiosity.

As such, I am pleased to finally let these earliest Rob Hanes stories see the light of day. For you completists, I haven't decided yet whether to make the stories available as a one-shot special edition! 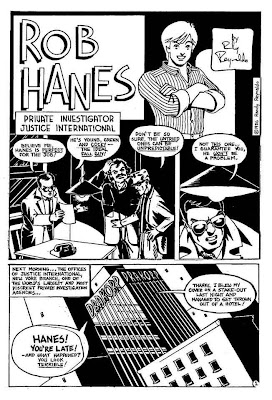 Still better than some professional artists have had published for years.

Kind of you to say!