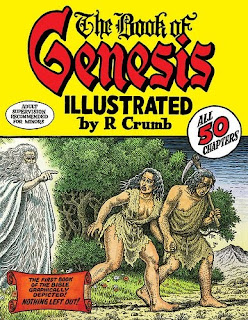 I finally found a free afternoon to visit (with my family) the Robert Crumb exhibit at the UCLA Hammer Museum in West Los Angeles this past weekend, which closes February 7. The official name of the exhibition, "The Bible Illuminated: R. Crumb's Book of Genesis," focuses on cartoonist Robert Crumb's well-received The Book of Genesis Illustrated, his unabridged adaptation of the first book of the Old Testament, a project which took five years.

My primary interest in the exhibition, of course, is professional: as a working cartoonist, I always enjoy seeing original individual pieces of comics art on display which, like most pieces of art, often take on a different life when seen in person. This is especially true for comics art, which is intended of course for print—only relatively recently has original comics art been deemed to possess any value in of itself. Seeing the original art often provides insight into a cartoonist's working methods and thinking. (Note: Photography of the art was not allowed and is not included in this blog.)

Though I didn't count all the pages, and my wife assured me there were some pages missing, it otherwise appeared to me that nearly every page from the book was included in the show. Each page was individually framed and displayed in page order in the exhibit—one could easily have read the entire book at the museum! (A reading room also was provided that provided multiple copies of the book for reading.) 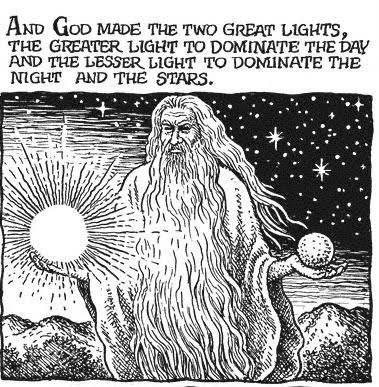 Two things struck me about the original art: the first at how relatively small they were. Traditional original comic art pages are usually drawn within a 10"x15" space,which is then reduced in printed format to 6"x9". In contrast, Crumb's book is a hardcover artbook, which means its dimension is larger than comic-book size; but the original art seemed only slightly larger than the final published size!

Second, I also was impressed by the pristine quality of each page. I am assuming Crumb uses a lightbox to trace his roughs onto the final pages because there was no evidence of any underlying pencilwork (or erasures) on the pages, and barely even any use of correction on the art. One can see the meticulousness of Crumb's fine linework and crosshatching. (A nearby exhibition at the Hammer of Rembrandt prints invited interesting and illuminating comparisons for me to Crumb's work—the artists' linework in both exhibitions were equally exquisitely rendered. The magnifying glass at the Rembrandt exhibit for studying the master's linework would have been equally as helpful at the Crumb exhibit! And many of the Rembrandt prints featured work that one would consider "cartoony" in their impressionistic representation.)

Also included in the exhibit was some of the reference and research material Crumb used in his project. In addition to reading scholarly works on the subject, he used for reference screen captures from Hollywood biblical epics loaned to him by a colleague. This initially surprised me until I realized, of course, that no extensive historical records exist that truly document the clothing, shelters, tools, etc., of the earliest existence of man portrayed in Genesis. Crumb also depended much on direct source material, particularly by scholars and people who lived in the region where the early days of the Bible took place. Also featured in the exhibit were samples of other biblical adaptations in comic-book form. 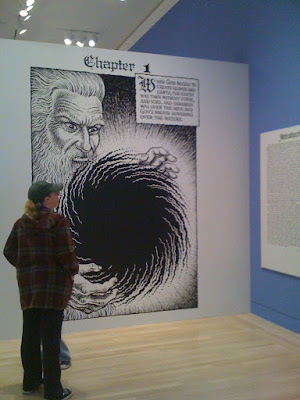 Ultimately, of course, Crumb's adaptation of Genesis is also a literary endeavor and any review of the exhibition would be incomplete without a comment about the book itself and the artist's intentions.

The text to Genesis is included in Crumb's adaptation in its entirety and unabridged. Crumb states in his introduction (reproduced wall-size at the entrance of the exhibition, as seen in the photo above) that he tried to approach the book unironically; indeed, Crumb certainly appears to have treated Genesis with respect, if not reverence in the traditional sense. One can also see the appeal for Crumb of tackling Genesis—the artist, after all, has made a career of exploring the most primal aspects of human existence (particularly sex!) and its flaws. Much of Genesis, beginning with Adam and Eve partaking in the forbidden fruit in the Garden of Eden which precipitates the fall of man, puts humankind's worst instincts on display, and includes a variety of tales both notorious and salacious, worthy of any modern-day gossip rag. On the flip side, of course, as the first book of the Torah and the modern Bible, Genesis also tells the story of creation and the earliest history of the Jewish people and formed the foundation for modern Christianity.

In his introduction, Crumb states that while some people consider the Bible to be "the word of God," it's his view that the Bible is, in fact, only the words of men. Such a disclosure naturally raises the question of whether this view has in some way colored and affected his presentation and approach. Personally, I saw no evidence in the work that Crumb did anything other than try to honestly present and illustrate the text as literally as possible, as he intended—though the mere act of representation in itself, which required Crumb to make decisions about how to present, illustrate and break up the text, could be deemed an act of personal interpretation that diverges from the truth of the text. This leads to the age-old question of whether a work of art can be fairly and objectively assessed on its merits, independent of any inherent bias about either the work or the artist and his intentions.

How that ultimately comes into play in Crumb's adaptation of Genesis I'll leave for the scholars to debate!

More information about the show, including videos and interviews with the artist, may be found at the Hammer Museum's web page about the exhibition.
at 6:07 PM Posted by Randy @ WCG Comics