The Boys of Summer (part 2) 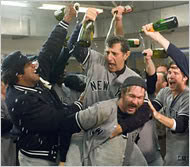 The other testosterone-heavy show of the summer is ESPN's original mini-series, The Bronx is Burning. Based on the book of the same name, the story chronicles the Yankees' summer 1977 run for its first World Series championship in decades, while its home city, New York, also grappled with the Son of Sam killings, a major blackout and riots, a near-bankruptcy, and a mayoral race.

The centerpiece, of course, is the larger-than-life egos and personalities of the organization, particularly demanding Yankee owner George Steinbrenner and manager Billy Martin. Also figuring large in the series is Reggie Jackson, who came to the Yankees that season, and catcher Thurmon Munson, who was the team's first captain since Lou Gehrig. Also playing prominent supporting roles in the show are Mickey Rivers, Lou Pinella, and Bucky Dent.

(I should note that, along with other prominent Yanks like Willie Randolph (my favorite) and Christopher Chambliss, this was the Yankee team I grew up with.)

Effectively evoking the era and integrating the show with 1970s-era footage, the series is fun and expansive, and successfully portrays the backstage politics of a high-stakes entertainment and sports franchise. As one reviewer effectively describes it, the show is "an all-male soap opera that would put 'Desperate Housewives' to shame. These men, at the height of their power, are the ultimate drama queens, larger than life, and maybe even bigger than New York."

Oliver Platt as Steinbrenner, John Turturro as Martin, and Erik Jensen as Munson turn in particularly fine performances. Credit particularly must be given to Platt for his outstanding work: given Steinbrenner's status as a minor icon thanks to both his outsize personality and as a recurring character on Seinfeld, I wondered whether it would be possible to successfully capture the man. It's a tribute to Platt's performance that he not only gradually comes to successfully embody the character, but he effectively makes it his own, making you forget you are watching an actor. Platt's performance sneaks up on you, and it's clear he is having a whale of a time.

Perhaps because of this, Steinbrenner surprisingly comes off somewhat more sympathetic than either Martin or Jackson. Though difficult and demanding, he nevertheless was dealing with outsized personalities. Martin obviously had a huge chip on his shoulder and was somewhat immature; while Jackson was a bit of a conceited prima dona. Nevertheless, one must credit the real-life Jackson, Steinbrenner, and other Yankees from the era for appearing extensively in "behind the scenes" interviews that accompany each episode. Given the passage of time and the fact that the events portrayed in the show led to a new Yankee dynasty, perhaps it's all water under the bridge now.
at 10:05 PM Posted by Randy @ WCG Comics