In the Nation's Capitol 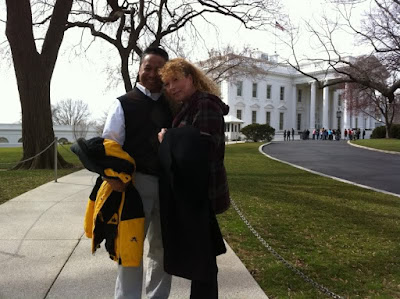 As a history buff, one of my favorite places to visit is Washington, DC. My wife and I were last there in 1998 and we had an opportunity to return earlier this month with our two young children. (Before that, I visited DC as a kid with my family back in the ‘70s.)

Since it’s easy to tire yourself out trying to fit everything in when you only have a few days, we chose instead to spend good, quality time at a few key places. It helped, of course, that we’d been to DC before, so we had a sense of what was realistic for a visit of a few days. For example, we decided the kids probably wouldn’t find seeing graves and monuments at Arlington Cemetery particularly meaningful or interesting. (Back in ‘98, my wife and I also visited Thomas Jefferson’s home, Monticello, in Virginia and the Manassas Civil War battlefield.) 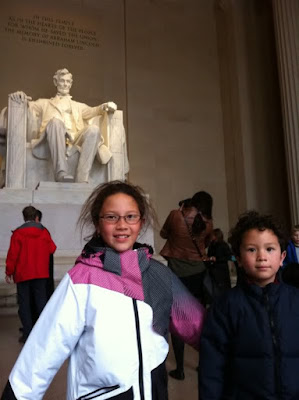 Partly for this reason, we spent a surprisingly brief time at the National Mall. I actually was in DC on business for a conference the first few days. At the end of the first day, having been indoors all day at the hotel for meetings, when I met the family for dinner that evening, I suggested taking a quick cab ride to the Lincoln Memorial at the Mall. My daughter was thrilled to see where Martin Luther King, Jr., delivered at his address in front of the monument; from there, we walked to the Korean War Veterans’ Monument, and the new World War II Veterans’ Monument. As it began to get dark, we hopped back in a taxi for our hotel near Dupont Circle for dinner. In retrospect, it’s good we made this quick visit, because we never found time to return and explore the other monuments at the Mall! Though I would like to have seen the Jefferson Memorial, the Vietnam War Monument, and the FDR Memorial, they’ll have to wait for another trip.

The first full day we spent together, we visited the Museum of Natural History and the American History Museum, both part of the Smithsonian. Actually, to be more precise, my wife and children visited the natural history museum while I visited the American History Museum. The kids had gone inside the natural history museum only briefly the day before (they ended up ice skating outdoors instead) and wanted to go back and spend more time there. As for myself, as fine as I’m sure the museum is, I wasn’t interested inseeing displays of things like dinosaur bones which I could see anywhere else, so I went instead to the American History Museum where my wife and kids caught up with me later in the afternoon. (They did get to see the Hope Diamond, which I saw back in '98.)

In any case, I wasn’t disappointed! The exhibits there included “Abraham Lincoln: An Extraordinary Life,” the First Ladies exhibit (a lot of gowns!), the American Presidency, Julia Child’s Kitchen, and an exhibition about Thomas Alva Edison and science in America. The Lincoln exhibit and another called the “Price of Freedom: Americans at War” (stretching from the French-Indian War to the War in Iraq) were especially memorable. The permanent display of the Star Spangled Banner flag, which inspired Francis Scott Key to pen the poem that became the national anthem, was also impressive, partly because I was shocked by the flag's huge size! 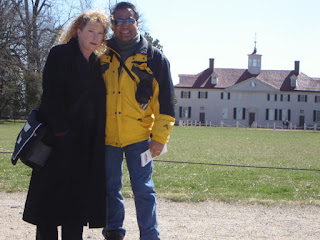 The next day, we drove a rental car to George Washington’s residence and plantation at Mount Vernon, which is about 12 miles outside Washington, DC. My wife and I visited Mount Vernon in 1998, but we were impressed by the changes since then. A huge state-of-the-art museum was completed there in 2006, but it’s mostly underground to preserve the original grounds.

Mount Vernon is one of my favorite historical places. It has a spectacular view that overlooks the Potomac—when you stand on the back porch of the main house atop Mount Vernon which looks out over the river (especially on a stifling summer day, as we did back in ‘98), you get a real sense of what it must have felt and looked like to George and Martha Washington back in the 18th century. It helps that the community has kept the surrounding area in its original state, including the woods across the river. I thought we would visit Mount Vernon for just a few hours then go off to see something else later in the day, but it was so interesting and immersive, we ended up staying there the whole day, arriving at 9:30 a.m. and leaving near closing time at 4:45 p.m.! Mount Vernon has also made an effort to deal with slavery honestly and directly. Slave quarters have been preserved and a monument to the slave population at Mount Vernon (and a discovered unmarked cemetery) has recently been erected. (One changed we noticed since 1998 is a reference in plaques and in the brochures to the slave population as “enslaved people” rather than “slaves.”) It was fascinating learning about Washington’s life as a farmer, which he considered himself even before a soldier or statesman. 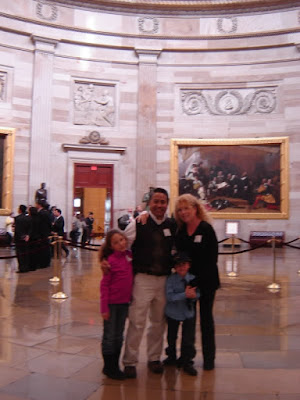 On Tuesday, we visited the White House and the U.S. Capitol, arranged in advance through our local Congressman. Because visitors are not allowed to take cameras or backpacks into the White House, we kept the rental car overnight so that we could park in the city and ditch our belongings in the car during the tour. (We returned the car after the tour and used the Metro after that.)

The White House tour was primarily restricted to the East Wing, but it was still a thrill to be inside. We learned one room was about to be closed for an event that Michelle Obama was hosting. A uniformed Secret Service agent in one of the rooms even graciously let our children behind the security rope so that they could get a close up view of a painting of George Washington while he pointed out interesting features of it. This is the same painting that has been in the White House since 1800 and was saved by Dolly Madison when the British burned down the structure during the War of 1812. At the same time we were on our tour, we noticed a Secret Service man giving a personal tour to two Russian dignitaries, who were accompanied by an interpreter to translate what the Secret Service man was describing.

After we returned the car, we took the Metro back to the U.S. Capitol for a tour that was given to us by the Congressional staffer who set up the tour. Since we met her at the Congressman's Office in one of the outlying executive office buildings for Congress, we used the underground tunnels that connect the Congressional buildings to the Capitol It was nice to have a personal tour by a Congressional aide; she also got us tickets to sit in the House and Senate chambers. Although not much was going on, we saw Minnesota Senator Al Franken presiding over the Senate chamber. The kids were really quiet and respectful, even though my 5-year-old son said afterwards, “It was boring!” But he was quiet and well behaved as we sat in the Senate gallery. Because we didn’t get to the Capitol until the afternoon, we didn’t get to see the main museum there until just before it closed. I would have liked at least one more day in Washington to see it.

Anyway, it was a terrific family trip!
Below are the links to the photo galleries from this trip: