Email ThisBlogThis!Share to TwitterShare to FacebookShare to Pinterest
For immediate release. 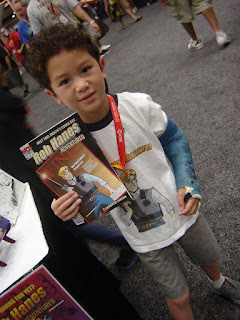 WCG Comics will debut issue 14 of the long-running action-adventure series, Rob Hanes Adventures, at the 2013 San Diego Comic-Con. To pick up the issue, purchase back issues, and meet series writer-artist Randy Reynaldo, visit WCG Comics at Booth K1 in the Small Press Area, off aisle 1500 near the back of the hall in Lobby B2. T-shirts, original art, button pins, and freebies will also be available.

“Except the year I was on my honeymoon in 2000, I’ve attended Comic-Con every year since the mid-1980s,” said Reynaldo, who has produced the indy series since 1994 and, under its current title, since 2000. "I'm fortunate to have a very understanding wife and, now, two children who look forward to the show each year!” 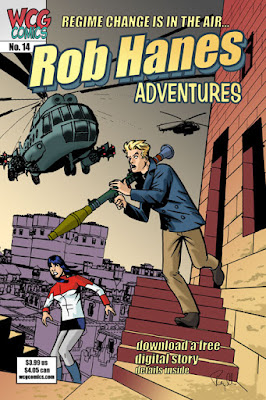 As announced in the issue's solicitation in May, the series takes the title character to the (fictional) Middle East country of Koman where the CIA asks him to bodyguard an exiled princess in the hopes her presence and ties to the local insurgent coalition will spark the overthrow of Koman's military dictator, General Amra. Koman has been a recurring part of the series since its beginning in the 1990s, so the story closes the chapter on a long-running story arc. Entitled “Regime Change,” the story continues the series’ “ripped from the headlines” approach and was influenced in part by the tumultuous changes overtaking the Middle East.

Inspired by classic adventure comic strips like Milton Caniff's Terry and the Pirates and Roy Crane's Buz Sawyer but set in the modern day — with dashes of light-hearted humor reminiscent of Will Eisner's Spirit — readers and fans have lauded Rob Hanes Adventures for recapturing the spirit of the classic adventure strip genre for modern day audiences.

Though themes and characters recur in the series, every story of Rob Hanes Adventures is self-contained. The entire series remains in print, including 14 issues to date and two trade paperback collections of earlier work. For more information about the series, previews and to purchase back issues, visit the WCG Comics at wcgcomics.com.

Click here for the original press release about Rob Hanes Adventures #14, which includes preview pages from the issue.

Or click here to go directly to a slideshow preview of Rob Hanes Adventures #14.