REVIEW: Once Upon a Time… In Hollywood 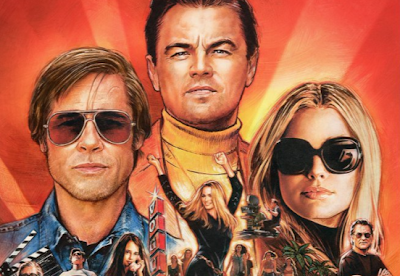 Note: A spoiler warning is included below.

While Quentin Tarantino has always been one of the most distinctive voices in Hollywood, he’s also one of its most self-indulgent. I mean this in the sense that he wears his influences and passions on his sleeve, and revels in them in his work. But what distinguishes Tarantino is his ability to draw the audience into his passions and enthrall them.

I’ve never enjoyed excessive violence in films (and have never liked horror movies) and, as I’ve gotten older, I’ve become less inclined to even sit through films that are suspenseful or harrowing. So while I do admire Tarantino, I’ve yet to see the Hateful Eight, Kill Bill, or Death Proof. That said, I have seen his others, including Django Unchained, with Inglorious Basterds my favorite. This is closely followed by Jackie Brown, his most “traditional” film, which for me showed that Tarantino was indeed a bonafide filmmaker.

Once Upon a Time…in Hollywood is perhaps his most personal, geeky and self-indulgent to date because it conveys the sights and feels of Tarantino’s childhood memories of growing up in L.A. Indeed, he has admitted the film is his love letter to L.A. Yet it succeeds because he captures the period in its sights and sounds so vividly, sweeping up the audience in its wake and bringing us along for an enjoyable ride.

The first half of the film or so in many ways is nearly all self-indulgence, with some foreshadowing of what’s to come. Here, Tarantino lovingly and with great attention to detail re-creates L.A. in its still-innocent 1960s’ swinging glory, down to the storefronts and the DJs heard on the radio and parties at the Playboy mansion. The film also revels in Hollywood film- and television-making, with time in the film spent at shoots on studio lots. 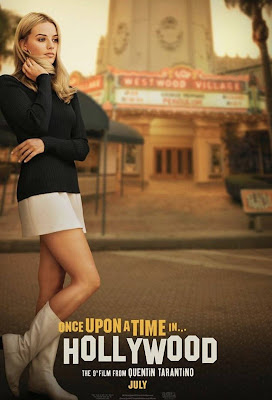 This re-dressing of L.A. for the film thrilled many local residents—while I did not move to L.A. until the 1980s to attend college at UCLA, I can attest that some of what can be seen in the film was still there when I arrived. In fact, the historic Village Theatre in Westwood, just outside the UCLA campus, is prominently featured in one of the film’s posters (pictured at right). In recent years, I have again become a regular patron of the theater with my family, partly because it is a large classic movie house. I assumed and hoped that Once Upon a Time… would open there and was disappointed to discover that the film opened instead directly across the street at the equally historic Bruin Theatre. However, it turned out to be the appropriate place to see it after all because when actress Margot Robbie, who plays real-life actress Sharon Tate in the film, goes to watch herself at a showing of the Dean Martin film, the Wrecking Crew, the theater she walks up to and enters, after talking to the people at the ticket booth, is the Bruin! The Village and Bruin Theatres are revealed in the film rather dramatically with a sweeping drone shot, and the audience in the theater laughed and then applauded in recognition when they realized they were sitting in the same theater as the one onscreen (she also walks through the lobby and watches the film inside the theater). Indeed, the marquee of the Bruin Theatre for Once Upon a Time… was identical in style and font to that for the Wrecking Crew in the film (compare the photos below). By the way, when I went to see the film, the theater also included posters outside of the faux movies featured in the film! 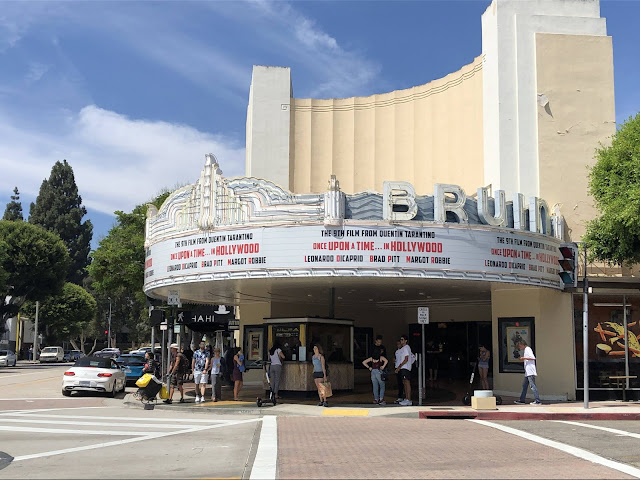 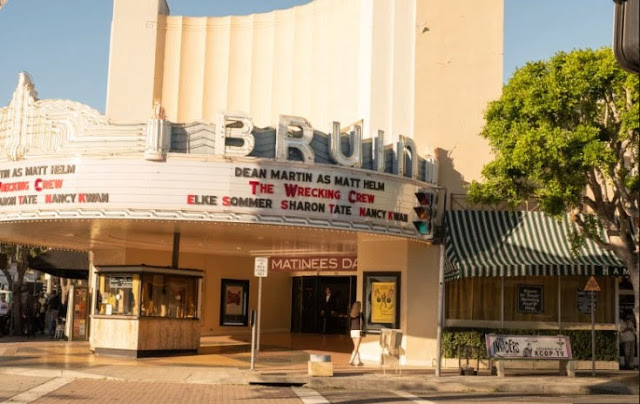 In the film's episodic first half, we are introduced to the main characters and follow them as they spend their days tooling around L.A. There’s Rick Dalton (played by a strong Leo DiCaprio), the star of a cancelled television series called “Bounty Law,” who has seemingly reached the expiration date of his TV career, lowering himself to taking on guest-starring roles on other TV shows and is considering doing a spaghetti western overseas; his stunt double/personal assistant, Cliff Booth (a great Brad Pitt, in full-on character actor mode), whose own life and career appears to be hanging on a thread; and, as mentioned earlier, upcoming Hollywood actress and ingenue Sharon Tate (portrayed by a luminous Robbie). 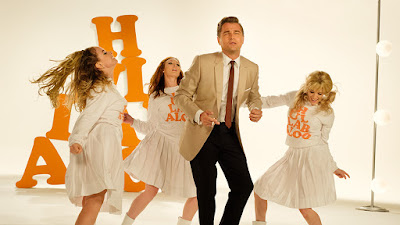 While Dalton and Pitt are fictional (though loosely based on the relationship between actor Burt Reynolds and stuntman-cum-director Hal Needham), Tate, of course, was the real-life wife of film director Roman Polanski and one of those murdered by followers of Charles Manson in 1969. In the film, Dalton is Polanski’s neighbor.

Given this context, the film’s narrative kicks into gear when Cliff comes into contact with the Manson cult, beginning with a meet-cute encounter with a young free spirit named Pussycat, who turns out to be a member of the clan, played by Margaret Qualley. (Qualley is outstanding in the role and has had a banner year, having played Ann Reinking in the terrific mini-series Fosse/Verdun, a character who is the polar-opposite of Pussycat. Pussycat is a true free spirit while the portrayal of Reinking made her appear as the only real grownup in Fosse’s life.) 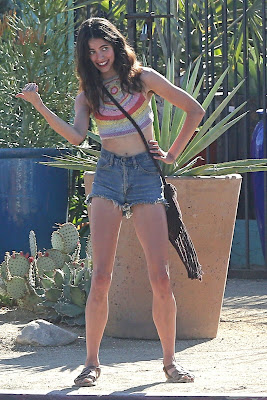 Through his encounter with Pussycat, Cliff visits the Spahn Movie Ranch, located in a remote area of L.A. and known by Hollywood for location shooting by movie and TV studios, and which was the Manson family’s headquarters. Being familiar with the location and the owner, Cliff finds the presence of the hippies at the ranch suspicious and takes it upon himself to investigate, in one of the film’s most suspenseful sequences. (Manson also makes an appearance later in the film, albeit very briefly, when a friend of Tate’s encounters him scoping out the Polanski/Tate residence.)

The film, however, takes a great departure from history and real life in the climax—while it will surprise anyone who knows what actually happened on the night Tate and her companions were murdered in 1969 by members of the Manson cult, suffice to say, it might be less so for anyone familiar with Tarantino’s Inglorious Basterds which took a similar revisionist approach to actual events by giving Hitler and his henchmen their just desserts in a final scene that is best described as fantasy wish-fulfillment.

Tarantino takes the same route here in upending history, with Rick and Cliff turning the tables on the Manson family killers in what turns out to be the film’s one truly prolonged violent, brutal sequence—on the one hand, given what actually transpired, seeing the killers get their due makes the scene cathartic, though at the same time the brutality of their comeuppance—sometimes bordering on gleeful and comic as many of Tarantino's scenes do—does make one feel a tinge of sympathy for those on the receiving end. Nevertheless, while the ending has had its share of detractors, I side with one reviewer who felt that history will ever forget what truly happened, so rather than exploit and wallow in the murders, Tarantino chooses instead to honor their memory by "saving" them in his film. By doing so, he also preserves their innocence—and, by extension, the era’s. (Tate’s sister initially expressed concern about the movie but they were put to rest after Tarantino shared the script with her.)

At the end of the film, it’s not clear what the future holds for Rick and Cliff, though of course they have found a measure of grace and redemption in their actions by preventing the murders and protecting Tate and her friends. As the police leave and Rick comes off the adrenalin rush of fighting off crazed would-be killers, he is invited up to hang out with Tate and her friends, while Cliff is taken by ambulance to the hospital in high spirits, with non-life-threatening injuries. The last scene between the two shows that their friendship has been further cemented by their shared baptism of fire. Who knows—perhaps like the Reynolds-Needham relationship that inspired Rick and Cliff, they eventually follow the similar trajectory of Hollywood success. 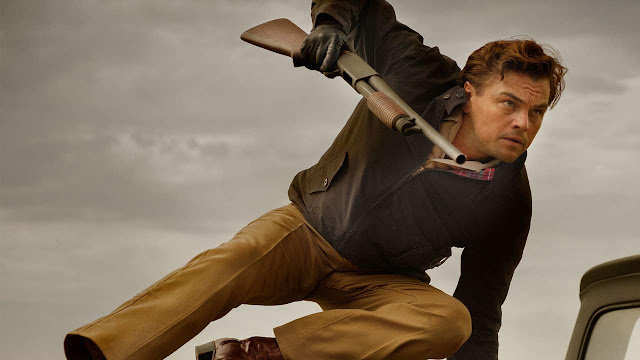 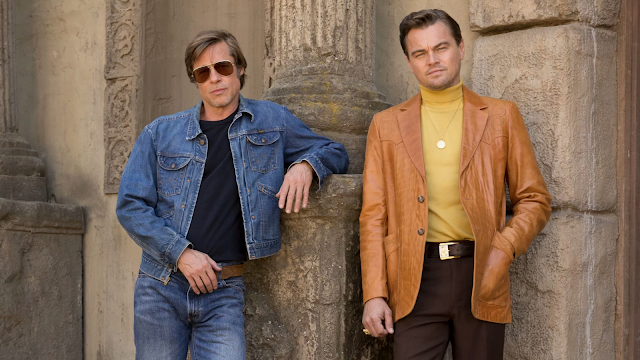