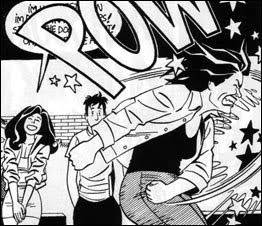 Like a lot of comic-book artists working professionally, it's difficult to stay on top of current work due to the simple lack of time. Mainstream super-hero comics are particularly difficult because of the over-arching story arcs that not only go on for multiple issues but also cross over into other titles. It's just not the kind of longterm commitment I can make anymore! And let's face it, now being close to middle age (okay, not "close to" but actually), I'm just not the target audience for many of today's comics. While I like being challenged and enjoy seeing innovative work, I'm not into "edgy" fare just for the sake of it.

Graphic novels have lately become an area of real growth for the comics industry. And not just compilations of series, but original works released specifically in graphic novel format. While I have picked up many that have received much critical attention, I have to admit, for the most part I've been a bit underwhelmed. For me, they tend to be too episodic, oblique, and "slice of life-ish" for my taste, rather than truly engaging and compelling. In short, partly jaded by age, I guess, it just seems few and far between that I pick up a comic-book and feel really excited and blown away. 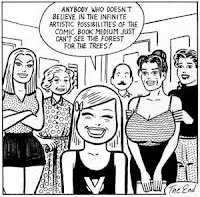 Surprisingly, just recently I experienced this kind of visceral response when I came across an old friend in the form of Fantagraphics' new Love and Rockets series from Los Bros. Hernandez, Jaime and Gilbert.

I am a big fan of the Hernandez Brothers from way back--in fact, believe I own the entire original full run of the series, including early if not first editions of the first issues. (I also had the good fortune once to sit next to Jaime over the course of a day during a book signing many, many years ago. He was fun to hang out with, and though I'm not sure he'd still remember me, we actually have some mutual friends. Their brother Mario was a fan of my work at the time, and Jaime seemed to be familiar with my work then.) I must admit, however, that during the latter part of that early run, I fell behind in my reading and lost the thread of the multiple, intertwined storylines of Jaime's Maggie and Hopey stories, and Gilbert's Palomar tales.

I did pick up the first issue of the new series, but I don't recall it having much of an impact on me. When I was at the comics shop few weeks ago, however, I picked up a more recent issue (I think it was #16) and suddenly found my enthusiasm for the series re-ignited. I ended up picking up the preceding issues at my next stop.

I can't pinpoint exactly what it is that drew me back in, but they're certainly still at the top of their game. They have a great knack for telling details and capturing the kind of human quirks, flaws, and inconsistencies that make their characters come to life. In Jaime's case, it's great to see the characters aged, while pursuing romance, careers, and working out their personal lives.

A comment by Gilbert in a recent interview probably puts it best:


It's a type of alternative comic that only my brother and I do, for the most part. Everybody else is going over to Pantheon because they've got a tragic biography to tell. I'm fine with that, but I'm just trying to do just stories with imagination—just old fashioned stories, you know?

(BTW, for the record, a few additional titles that I do follow religiously include the Spirit Archives compilations of Will Eisner's great series, the all-new Spirit series being produced by Darwyn Cooke through DC Comics, and Adrian Tomine's Optic Nerve (when it comes out!).)
at 11:10 PM Posted by Randy @ WCG Comics