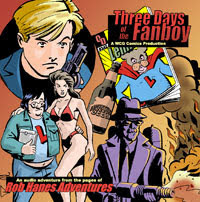 Back in the 1990s, WCG produced a 30-minute Rob Hanes Adventures audiotape called “Three Days of the Fanboy.” Designed as a classic radio show, and professionally produced and engineered, the story brought the series to vivid life with voice actors, music and sound effects. (One of the program’s lead voice actors, Scott Brick, has since become a prolific and award-winning audiobook narrator, having recorded more than 250 books to date, including many by best-selling authors such as Brad Meltzer, Orson Scott Card, and Tom Clancy.) In the show, Rob is hired to protect the comic-book collection of fanboy extraordinaire Johnson McFeeley (played by Brick).

Long overdue, the audiotape has finally been transferred to CD and now is available at the WCG Comics webstore. As seen above right, the cover art has been redesigned for the new CD format. Revel in the dated references and hear the series come to life with this unique and fun collector’s item!

To see photos from the recording, click here.
at 8:10 PM Posted by WCG Comics