Countdown to San Diego I 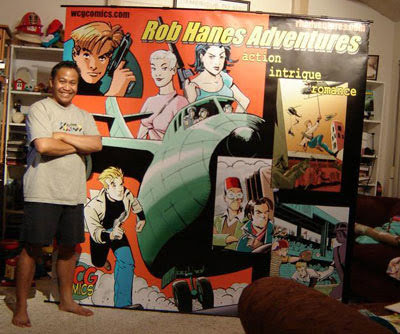 In the coming weeks, I'll be formally making announcements through press releases, my website, and my e-newsletter about my participation as an exhibitor at the Comic-Con International (CCI) in San Diego (booth S14 in the Small Press Pavilion--come visit!). However, I thought I'd use the blog to give people a behind the scenes peak at preparing for the show. This year marks my 10th year as an exhibitor at CCI, dating back to 1994.


Planning, of course, starts anywhere from a year to six months before the show when exhibitors must reserve and purchase a booth. Not too long after that, I actually reserve my hotel. The popularity of CCI has caused great competition for rooms, and over the last several years I've found it necessary to book way in advance. I also try to order any books I'll have on sale at the show as early as possible to avoid being part of the surge in demand many printers experience right before convention season. (In one of my first years exhibiting, I discovered on a Friday evening that a shipment sent to me by my printer was at a shipping dock near the San Diego Airport that was literally due to close in 15 minutes for the rest of the weekend. With my then-girlfriend (now wife) in tow, I hailed a cab and promised the driver a $20 tip if he got me there on time. We made it with minutes to spare.)

The big news this year is that I created a new banner for my booth, pictured here. I have a set-up I used for years (which can be seen in my photogallery of past conventions), but I was way overdue for an upgrade. Digital technology offers many choices and has made this kind of job more affordable.

The photo here was taken about 1 a.m., after the family was asleep, and accomplished after several successive evenings of trying to figure out how to assemble the banner. Once I finally figured it out, it actually is not too difficult to put together. But I still had to jury-rig part of it because it didn't quite work as advertised. It looks fine, but I wish it was sturdier. (But you get what you pay for!)

The real test will be whether it survives the wear and tear of four days in San Diego. If it works out, I'll provide a link of where I ordered it and be happy to recommend it to people. But I think I'll wait 'til after the show after I've had a chance to use it "in the field" under real-world conditions!!
(I plan to post more, but for additional sneak peaks, visit my photogallery for the show!)
at 1:51 AM Posted by Randy @ WCG Comics