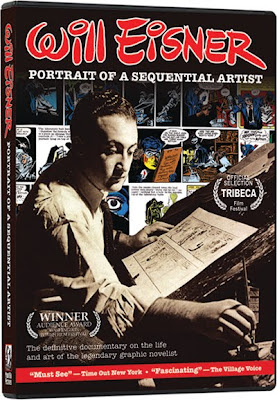 A documentary on comics legend Will Eisner, titled Will Eisner: Portrait of a Sequential Artist, is now available. Several years ago at the San Diego Comic-Con, I attended a panel about the project that featured an extended preview of the documentary. The promotional trailer was also being used to raise funding for the project's completion. After making the rounds of the fllm festival circuit this past year—including the Tribeca Film Festival—I recently learned the film is now on DVD and ordered a copy.

Eisner’s biography is now fairly well known, but anyone wishing to gain greater personal insight and personal knowledge about the artist and his work will enjoy this high quality documentary. The film covers all aspects of his personal biography, including his immigrant roots; his founding of what is considered the first comic-book “sweatshop” in the 1930s, which underscored his business acumen even at an early age; his launch of the syndicated Spirit comic-book newspaper insert; his sojourn from the mainstream comics industry to found a company that produced comics for educational (and commercial) purposes; and his return to the industry in the 1970s with the re-discovery of the Spirit and, more importantly, a new phase of his career when he began focusing on “graphic novels,” many of which were autobiographical in nature and explored his Jewish identity. The documentary does a good job of recreating the environment that produced Eisner—it’s been well documented how comics were almost solely the brainchild of Jewish immigrant kids primarily from the ghettos of New York City.

The documentary, of course, also builds on Eisner’s legacy as one of the most innovative comic-book storytellers of his time, and touches a little on the personal tragedy that was not known until after his death that drove his first graphic novel, A Contract With God, which is considered among the first such books of its kind.

What is particularly striking about the film is the amount of home movie material that makes its way into the story, some dating back to the 1940s! The film includes interviews with many of Eisner’s colleagues in the industry, as well as a few nice surprises like Kurt Vonnegut.

The documentary also provides me with an opportunity to mention Eisner’s authorized biography, Will Eisner: A Spirited Life, by Bob Andelman. This book, which I read back in 2005, is among the first (and best) “serious” biographies of a cartoonist—”serious” in the sense that it goes beyond mere fan admiration and relies on extensive research, vetting and interviews (including with the artist and his wife).

Andelman was given unfettered access to Eisner, and spent a few years with the artist as part of his research. The book appeared in the same year as Eisner’s death in 2005. Andelman’s book was the first to contain details about Eisner’s private life—including the loss of his daughter to leukemia—that even many of his closest friends were unaware of, and which drove the titular story in the above-mentioned A Contract With God.

I highly recommend both the documentary and the book.
at 7:21 AM Posted by Randy @ WCG Comics