With Star Wars: The Force Awakens now available on BluRay/DVD, and Batman vs. Superman: Dawn of Justice well into its theatrical run, I thought I’d weigh in on these two films that are tentpoles for two major franchises….

After successfully revitalizing and updating Star Trek, Abrams was persuaded (with some prodding) to tackle Star Wars. In some quarters—particularly among older fans—there was the feeling that the prequel trilogy that George Lucas produced (Episodes I-III) had somewhat tarnished the brand. With Disney now the owner of Lucafilm—and Lucas’s handpicked successor, Kathleen Kennedy, now running the studio—there was a lot riding on plans to continue the series. Abrams had the (seemingly) unenviable task of pleasing the old guard while introducing new characters that would hopefully in the same way capture the hearts and imaginations of a new generation of fans as the original iconic cast of characters.

Most reviewers and fans have agreed that Abrams achieved this goal and then some. Like many, the film for me brought back that same feeling I had after seeing the original Star Wars (now Episode IV: A New Hope) when I was 14 years old. To be frank, it’s not a feeling I’ve had for a long time.

While some have noted that the plot of the new Star Wars film echoes the beats of the original, it nevertheless is a successful melding of old and new, with the original characters (and actors) passing the baton to a new generation. 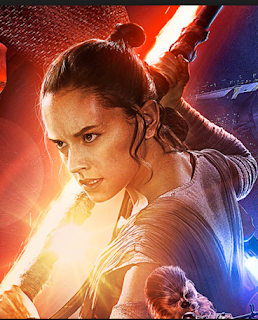 At the heart of this, for me, is actress Ridley Daisy, as Rey. The extent of her popularity among audiences (even among males who are often thought to be resistant to a female action lead) reportedly even surprised Disney. Daisy gives a remarkable performance — Rey’s facial expressions and reactions can break your heart and though lonely and wounded, she is a strong figure who has been universally embraced because of her strength, courage and resilience, not because of her gender. Starting with Rey, with this film Abrams has also brought greater diversity to the Star Wars cast and universe, which is essential to reflect the realities of our own world, as well an acknowledgment of a more diverse and international media market. However, by no means has the series’ new direction meant that the original characters are being cast aside—as the last shot of the film demonstrates, Luke Skywalker clearly will play a central role in the next installment.

In terms of production value, Abrams (along with screenwriter Lawrence Kasdan, who wrote Episodes V—considered the best in the current canon—and VI), wanted to bring back the gritty, analog quality to the films that Lucas displayed in the first trilogy but strangely eschewed when he worked on the prequels trilogy. His over-reliance on CGI and green screen on the later movies made them antiseptic, sleek and hard to relate to.

Abrams is a true fan who gave the franchise back its heart. The most important goal was to make audiences feel as invested in the new cast as the original. And it appears he has succeeded—so here’s to the coming SW: Rogue I and Episode VIII!

Batman vs. Superman: Dawn of Justice

Like Abrams, filmmaker Zack Snyder faced a daunting challenge with Batman vs. Superman: Dawn of Justice. Though a simple sequel was initially planned to 2013’s Man of Steel, not wanting to be left behind by Marvel Studios’ success with its series of universe-building franchises—anchored by the Avengers films but ably supported by a satellite of successful films featuring A- and B-list properties ranging from Captain America and Thor to Ant-Man and Guardians of the Galaxy—the film soon represented Warner Bros. (DC Comics’ owners) nascent steps down the path of building its own integrated movie universe.

Towards that end, DC decided to start off with a bang and strong statement by teaming the two eldest statesmen of comics properties, Batman and Superman, on film for the first time. And if that were not enough, they also introduced Wonder Woman and included brief cameos of Aquaman, the Flash, and Cyborg, as a preview to the upcoming Justice League film, which will also be preceded by some satellite films featuring, at least, Wonder Woman and Aquaman, as well as ancillary characters like the upcoming Suicide Squad.

It was a tall order and the film has a lot to squeeze in. As a result, as some critics have noted, the film is overwrought at times. The epic, climactic battle between Batman and Superman—which itself would have been the fitting end of any big-budget film—turns out to be only a bit of a prelude to an even bigger battle with a super being named Doomsday created by iconic Superman arch nemesis Lex Luthor.

Reviews have been mixed to savage, but to tell you the truth, I liked the film (and there has been a bit of a backlash to the backlash). To be fair, in many ways, this film is more faithful to the comics than many other superhero films—however, that also may be its weakness because it speaks more to the hardcore geek audience/comics fans than it does to mainstream audiences.(In contrast, Marvel has been incredibly effective in balancing the need to please existing comics fans while also producing appealing, mainstream “popcorn” films.)

Despite all the business in the film, and perhaps aided by the film’s 2 hour and 45 minute length, I never found any of the characters shortchanged (though I did feel it took awhile for Batman to appear onscreen). 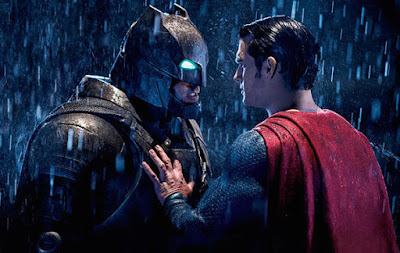 Among the highlights: Affleck is great as Batman/Bruce Wayne; the connection that finally makes Batman see Superman’s humanity is a clever and effective moment that reaches deeply into the characters’ history; Gal Gadot makes a totally kick-ass Wonder Woman, making the shot of Superman, Batman and Wonder Woman itself worth the price of admission. (Like Star Wars' Rey, Wonder Woman has been a breakout female hero that has been universally embraced by geeks of all genders.) And the ending was a surprise, setting up, presumably, the upcoming Justice League film.

There have been some complaints about Jesse Eisenberg’s performance as Lex Luthor, some feeling that he didn’t even seem to be in the same film. Personally, I thought his performance was fine; if nothing else, his Lex Luthor certainly was a more serious villain than the ones portrayed by Gene Hackman and Kevin Spacey on film, where their obsession with real estate bordered on comic relief. In contrast, in BvS, Luthor is a man jealous of Superman’s godlike power and uses the same feelings of fear and awe he shares with Batman/Bruce Wayne shares to exploit the animosity between Superman and Batman. I'm glad that the film ends in a respect between the two characters, unlike the ongoing dislike between the characters in the current comics.

Perhaps my one negative response was this is a Batman that certainly kills a lot of people. This did seem a bit at odds with the character’s history, but I guess it is a reflection of the times we live in.

Uber-Batman fan Kevin Smith felt there wasn’t a lot of heart or humor in the film. Frankly, the lack of humor in the DC Universe films has always been an issue – while it’s probably unfair to compare the WB/DC films to the Marvel films when both acknowledge they have taken different approaches, Marvel nevertheless has found a way to have fun and be humorous while not sacrificing spectacle or the integrity of the characters; in contrast, DC’s films tend more humorless and take themselves a bit too seriously.

But I do believe there was heart in the film; it just takes some digging to get there.
at 6:13 PM Posted by Randy @ WCG Comics