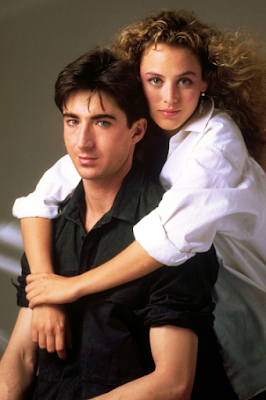 Perhaps the most idiosyncratic choice in my list of 10 films in 10 days is my eighth entry, Electric Dreams (1984). I actually wrote about this film on my blog back in 2015, so much of this is taken from there—I also recently rewatched it and can say my feelings for it remain the same!

This little known/seen romantic comedy/”date movie” featured the major film debuts of actors Lenny von Dohlen (later seen in the Twin Peaks television show and Home Alone 3) and the lovely Virginia Madsen. Its tagline—"a love story about a boy, a girl, and a computer"—says it all. (Bud Cort voiced the computer.) Adding to the obscurity of this film is the fact that it’s never been available on DVD in the U.S., let alone BluRay. I saw Electric Dreams in the theater several times on its release and it was one of my earliest VHS purchases, bought used from a video store at a time before films on VHS were relatively affordable. I viewed that tape multiple times for many years and had the foresight a few years ago to transfer the fading copy onto a recordable DVD before the VHS copy finally gave out (the picture was already quite faded – but I’ve since discovered the film is available in its entirety on YouTube!)

Though in many ways a true product of the ‘80s—with a score by synth disco and electronic dance music impresario Giorgio Moroder and songs featuring the likes of Boy George and Jeff Lynne—the concept was actually very much ahead of its time. Set in San Francisco (though the outdoor shots are filmed on location, it was otherwise shot on a London soundstage!), von Dohlen plays Miles, a milquetoast architect, while Madsen plays Madeline, a classical cellist who has joined the local symphony and the object of Miles’ attention when she moves into the apartment upstairs. After Miles purchases a computer to organize his life and computer-model an earthquake-resistant brick he’s designing, the PC becomes sentient (and learns to speak) through a convergence of mishaps after being connected to the nascent internet—which soon becomes increasingly jealous of Miles. As a result, the computer—who we later discovered is named Edgar—sets out to ruin Miles’ life by attacking him through the electronic networks, by playing havoc with his financial credit and reporting him as a wanted felon in the system.

At the time of its release, the film certainly stretched credibility since there was no World Wide Web or Internet yet as we know it, and modem communication networks were very much in their infancy. Nevertheless, the film in retrospect is quite prescient in predicting the threat of hacks. But the film is not a cautionary tale about technology—at its heart, it’s a simple romantic comedy involving a love triangle in which one of the parties happens to be a computer.

The main reason I enjoyed this film was because I simply found it very romantic—in fact, I used to watch this film when I needed a little cheering up. The filmmakers use San Francisco effectively as the backdrop, giving the movie character and a strong sense of place. And in today’s era of irony, self-awareness and snarkiness, the characters and their story project a sweetness and innocence rarely found in films anymore. Anyway, it’s a film that came into my life at the right moment and remained a touchstone for me for many years as a young single person.