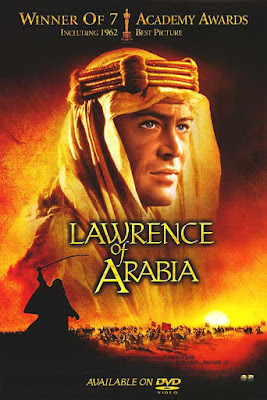 Lawrence of Arabia (1962), released the year I was born, is the seventh entry in my 10 films in 10 days. Anyone familiar with me or my work will know this film is right in my wheelhouse—a sweeping historical epic adventure set in an exotic locale. Arguably the greatest film epic of all time—they truly don’t make ‘em like this anymore folks—and directed by the great David Lean, it is based on the real-life story of T.E. Lawrence, a British officer during World War I who served as a liaison during the Sinai and Palestine Campaign and the Arab Revolt against the Ottoman Empire.

Adding to the cachet of the film is the fact that Lawrence—both in real life and in this film—is a bit an enigmatic figure. Is he an idealistic romantic doomed to disillusionment? An adrenalin and power junkie? Ambitious? Or just a clueless political pawn? In the film, of course, he is all of these.

The film opens with Lawrence being assigned as an observer to Prince Faisal, who is leading the Arab revolt against the Turks. Lawrence, however, soon becomes a more active player, planning and leading some military actions and campaigns, perhaps both for glory as well as out of genuine support for Arab autonomy and anti-colonialist sentiment. While the British initially see Lawrence’s actions as brash (and even vaguely treasonous), they shrewdly decide to use him to their advantage as a diversionary tactic against the Turks. Soon, however, what Lawrence sets in motion overtakes him and he also begins to learn that war and killing perhaps aren’t so romantic after all—with the end of the war also comes the end of idealism as political reality (and gamesmanship) sets in, with the partition of the conquered colonies among the victors.

The film won best picture at the Academy Awards and made lead actor Peter O’Toole and supporting player Omar Sharif international stars. It is both sweeping epic and intimate character study, yet at the end of the film, the figure of Lawrence and what drove him remains as opaque and inscrutable as when we first meet him.

For many reasons, this film could not likely be made today. Aside from its cost, the script has no female speaking parts (I think women appear in two scenes and you never see their faces since they are in burkas) and with the exception of Sharif (who was already an Egyptian matinee idol and hired to replace a French actor originally cast in the role), the two most prominent Arab characters in the film are played by Western actors—Alec Guinness as Prince Feisal and Anthony Quinn as Auda Abu Tayi (both were made up to bear remarkable resemblance to both real life figures). While both actors played the roles well and with great sensitivity—with Quinn particularly larger than life and chewing up the scenery to great effect—such casting would certainly not fly today! But it nevertheless is a lush, romantic, beautifully told and shot film—knowing it was shot on location suggests the production was as much of an adventure and daunting behind the scenes as what’s captured on film.