More Capsule Reviews in the Time of Coronavirus (4) 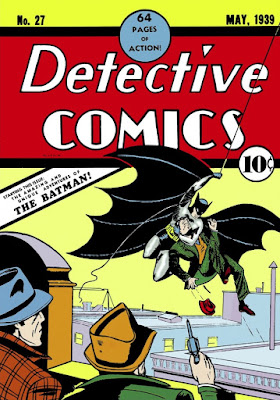 When I went to see the film Batman v. Superman: Dawn of Justice, I remember gasping in surprise (and excitement) when I saw Bill Finger—a comics writer widely acknowledged but never officially credited as instrumental in developing the character of Batman—receive screen credit in the film’s opening title sequence. I was aware that Bob Kane, who came up with the initial idea of Batman, had contractually been given sole official credit as the character’s creator from the very beginning and that Finger, a prolific writer who primarily worked as a ghostwriter in comics for most of his career, had died penniless and in obscurity.The Hulu documentary Batman and Bill tells the full story that led to the credit Finger received on the film and now on all subsequent Batman productions. Much of the film focuses on the relentless detective work of Marc Tyler Nobleman, a writer who became obsessed with uncovering the story of Finger, his involvement with the creation of Batman, and his crusade to get Finger credit.

Finger’s involvement with Batman has always been an open secret in the industry—though Kane came up with the initial idea of the character, Finger wrote most if not all of the earliest stories and reportedly suggested many of the elements that became a signature of the character, such as the cowl, dark colors, scalloped cape, the batcave, batmobile, and many of the villains. Finger was essentially considered an early member of Kane’s shop—a ghost who also did other work for DC—and died in obscurity in 1974.

Unlike the more naive Jerry Siegel and Joe Shuster, who created Superman and notoriously gave away the rights to the character for $130, Kane shrewdly leveraged a sweetheart deal with DC Comics that gave him sole creator credit and a share of the licensing and profits. As far as I know, the contract has never been made public, which the documentary seems to confirm. 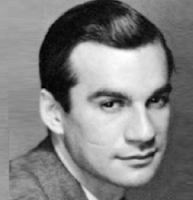 Adding to the mystery was the fact that Finger had no known direct heirs or descendants, who would be the only people with any standing to make a claim. His line seemed to end with Finger’s son, who died in the 1990s of AIDS. However, in a quirk of fate, Nobleman discovered that Finger’s son actually had been briefly married and produced a daughter. After Nobleman connected with the family, he learned that Finger’s involvement in the creation of Batman was part of family lore and had hung over the family like a dark cloud. Both Finger and Finger’s son made occasional attempts to get DC Comics to make amends with little luck. While DC never denied Finger’s claim outright, they never, of course, made any concessions. (Throughout, the family made clear their main goal was simply getting Finger credit).

(Kane himself does not come off well—while in moments of guilt he acknowledged Finger’s work, including in his memoir, at the end he seemed to double-down on the myth that he was Batman’s sole creator.) 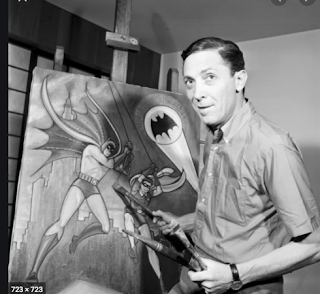 Though the family by then felt they no longer had the energy or resources to pursue the claim further, with the encouragement and support of Nobleman and others, including family and friends who were attorneys, they again approached DC. To their credit, again due to Finger’s well known involvement in the creation of the character, DC treated the family amicably and with a degree of understanding, inviting them to premieres and other events celebrating the character; his granddaughter also was invited to comics conventions where she got the opportunity to speak about her grandfather and their cause. After some legal back and forth, an agreement was soon reached—the family prudently came to an agreement rather than pursue a protracted legal fight, though they used the threat of potential litigation as leverage. The outcome was the credit given to Finger on the film and in other media where creative credit is given: “Created by Bob Kane with Bill Finger.”

I found the documentary moving—after Siegel and Shuster (and, over at Marvel Comics, Jack Kirby), Finger’s story ranks among the great injustices in the comics industry. Fittingly, an award presented annually at the San Diego Comic-Con that recognizes comics writers—one deceased and one still living each year—who have not been adequate recognition during their lifetimes for their work was named the Bill Finger Award. 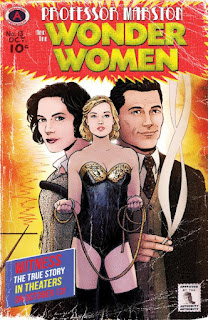 Professor Marston and the Wonder Women
Professor Marston and the Wonder Women tells the fascinating and salacious story of William Moulton Marston, creator of Wonder Woman, and the women with whom he appeared to have lived with in a polyamorous relationship, Sarah Elizabeth Holloway and Olive Byrne. (Marston was legally married to Holloway, had children with Byrne, and the two women continued to live with each other after Marston’s early death at age 53).

Though the family has dismissed the details of the story—which the filmmakers acknowledge is based on conjecture—it is nevertheless, at times, a moving account of their complex relationship and arrangement. The story is less successful when portraying their sexual life—though rated R due to subject matter, the film nevertheless keeps the portrayals relatively tame and in good taste; however, given that their relationship may have involved BDSM (which is partly relevant because the early Wonder Woman comics notoriously featured such acts explicitly in the comic book), these scenes sometimes unintentionally come off as humorous. While all the actors are fine, including Luke Evans as Marston and Bella Heathcote as Olive, Rebecca Hall particularly shines as Elizabeth.

Nevertheless, by the end of the film, I felt sufficiently moved by the story and their love for each other that I could get past these scenes. 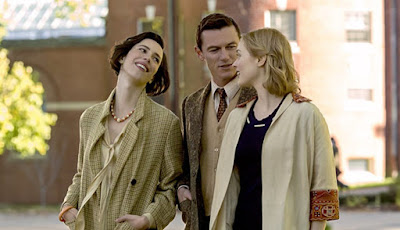 Rebel in the Rye 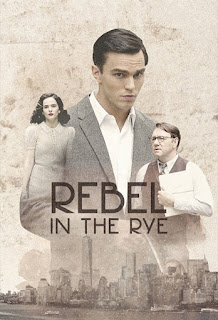 Actor Nicholas Hoult, who has been on a roll lately (and who I’ve followed since his film debut in About a Boy when he was about 13), has become the recent go-to actor of portraying writers: he recently played J.R.R. Tolkien in Tolkien (2019) and also appeared as J.D. Salinger in 2017’s Rebel in the Rye. I actually saw Tolkien in the theaters on its release earlier this year and was not aware of Rebel in the Rye until I came across it recently on Hulu.
What’s striking about the film is that they are similarly about two writers who were deeply scarred psychology by war, which manifested itself in their writing: Tolkien was gassed in World War I whereas Salinger saw combat on D-Day, the Battle of the Bulge and other skirmishes in World War II (which included liberating the Dachau Nazi concentration camp).

Of the two, I found Rebel in the Rye to be the slightly better film, though it only lightly touches on Salinger’s questionable behavior related to pursuing (and perhaps grooming) much younger women. (The film came out about the time the #metoo movement was born.) In contrast, Tolkien focuses more on his relationship with the woman who would become his wife. Nevertheless, both are fine movies that provide some insight into the writers and the experiences that informed their writing.
Margin Call
I want to give a shout out to the outstanding film Margin Call, a perennial favorite of mine which I have watched several times over the years (meaning it’s shown up more than once in my end of year Entertainment Roundups!) 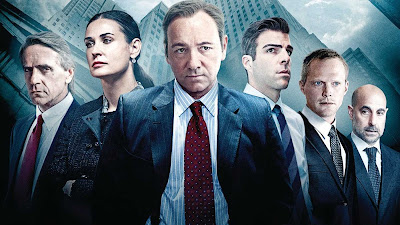 Set at a fictional Wall Street investment bank over a 24-hour period during the start of the 2007–08 financial crisis, the film’s events are set in motion by the discovery of an investment bubble that threatens to bring down the firm by a low-level risk management officer (Zachary Quinto), who is given a head’s up by his boss who has just been laid off (Stanley Tucci). The discovery prompts a late-night/early-morning emergency meeting that leads to the fateful decision to save the firm by essentially selling back and unloading all their investments and positions back onto their unwitting customers and clients before the meltdown occurs and they’re found out. (Investment bank Goldman Sachs similarly moved early to reduce its position in mortgage-backed securities, which triggered the great recession of 2008.)

The film itself feels like a taut suspenseful thriller. At first, this might sound like hyperbole since the movie itself consists of talking heads (in fact, the film feels like it could be produced as a stage play), until one remembers that ordinary people’s very livelihoods and futures throughout the country and around the world were very much impacted by the over-exposure to risky investments and their collapse. 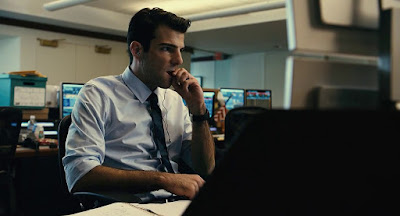 Nevertheless, while the film gives enough information to viewers to understand what is happening, it focuses on the people and their varying degree of culpability and sense of responsibility/conscience of what is occurring. It does seem to suggest that the higher up you are in the chain, the more entitled and less responsible you feel—but make no mistake, these are indeed the so-called “Masters of the Universe,” as portrayed in Tom Wolfe’s book about Wall Street, The Bonfire of the Vanities. It helps to have a topnotch cast; in addition to Quinto and Tucci, the film also features Kevin Spacey, Paul Bettany, Jeremy Irons, Simon Baker, and Demi Moore.

The cast is equally excellent all around, but Irons as the somewhat amoral head of the company is particularly delicious in a relatively small role—underscoring how complex and inscrutable high finance can be even to the people running the companies, at one point asking that the problem be explained to him as simply as possible: “Speak to me as you would a two-year old or a golden retriever.”

I always enjoy such these financial drama, though they vary widely in quality. I count Margin Call and 2015’s the Big Short among the very best of these (one could also include the influential Glengarry Glen Ross here, though the financial shenanigans there are more incidental to the plot rather than the centerpiece). Wall Street, the Boiler Room, and Too Big to Fail are additional films in this category that are less successful. Wall Street certainly hit the zeitgeist of the time, and while it's a great time capsule of the ‘80s financial world, I don’t feel it’s aged well.
at 9:44 PM Posted by Randy @ WCG Comics