Reviews in the Time of Coronovirus (6) 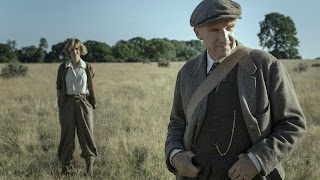 The Dig, which recently dropped on Netflix, is yet another quality period drama from the U.K., that the country does so well, featuring a cast of reliable and versatile British actors who move fluidly between period films like this and other film projects and genres: Ralph Fiennes, Carey Mulligan and Lily James.

Set in the back country of Great Britain on the eve of World War II, a self-taught but erudite archeologist named Basil Brown (Fiennes) is hired by a wealthy widow, Edith Pretty (Mulligan), to excavate some ancient mounds on her private property that she believes have historical significance. This leads to the discovery of a preserved ancient ship, believed to be the burial place of an Anglo-Saxon nobleman. As the significance of the discovery becomes clear, however, the British Museum moves in, initially pushing Brown aside.

This is just the backdrop, however, as the film also focuses on the people brought together by the discovery: Brown, the loner archeologist whose wife understands and supports his devotion to his work; Pretty, the lonely young widow who comes to respect and be attracted to Brown on some level, both because of their shared interest in archeology and history, but also because of the way he quickly becomes a father figure to her precocious son; and Peggy Piggott (James), with her husband (Ben Chaplin) on her first dig, who seems unavailable to her emotionally (not to mention sexually), and soon finds herself attracted to Pretty’s cousin, who is about to join the RAF as war looms.

Generally lowkey, in keeping with the famous British reserve, it is nevertheless a compelling film because it works on several levels and gently goes in directions you don’t expect, with many of the characters and their inner stories deftly told. There is an inherent loneliness to many of the characters, but they find ways to connect and find grace (and, in some cases, love), all connected by the central tale of the discovery. The "dig" is as much a metaphor for what the excavation brings out in the characters.

It wasn’t until after I watched the film that I learned the Dig is, in fact, based on a real-life story, regarding the discovery of what is known as the Sutton Hoo collection, now housed at the British Museum, which is one of the U.K.’s greatest archeological discoveries. Brown, Pretty and Piggot are all real-life figures and while of course the film no doubt took creative liberties to give the characters an inner life and to serve the purposes of the story, the basic outlines of their lives are here intact.

As I said, it’s a quiet film, but it sneaks up on you and I found it’s stuck with me since I viewed it. Highly recommended. 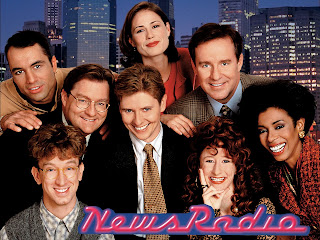 It’s a crime that this sitcom—which ran from
1994–99 on NBC—is not better known or currently available in its entirety for bingeing on a streaming channel (I came across the first season on IMDB TV and ended up purchasing later seasons for streaming).

A workplace comedy about a group of misfits who work at a news radio station, it featured an ensemble cast of both experienced and upcoming actors, each playing to a tee well-defined eccentric characters that together made for a hilarious show that combined sharp witty writing with some physical humor. Headed by Dave Foley (from Kids in the Hall) as the station’s general manager who arrives in the first episode, the cast also includes Stephen Root (as the station owner), Andy Dick, Maura Tierney, Vicki Lewis, Joe Rogan, and Khandi Alexander. Last but not least, anchoring the show was the great Phil Hartman, known as “The Glue” when he was on Saturday Night Live for his gift of holding the show together, a role he also undoubtedly played on Newsradio.

While the show ran a respectable 97 episodes and 5 seasons, and received critical attention, it nevertheless always existed on the cusp of cancellation, which was not helped by the network moving its time slot 11 times. Tragically, shortly after the show had received another reprieve and was renewed for its fifth season, Hartman was shot and murdered by his wife while he slept in his bed; addled by a mixture of antidepressants, alcohol and cocaine, after realizing what she had done, she turned the gun on herself a few hours later. Though the show continued its fifth season—with Hartman’s friend and SNL co-star Jon Lovitz taking his place—Newsradio was not the same show and it was cancelled after that season.

Nevertheless, the show remains solidly funny and timeless, occasionally veering into the slightly surreal, presaging sophisticated comedies to come like Arrested Development, but always grounded by its strong characters and the ensemble chemistry. Well worth a visit! 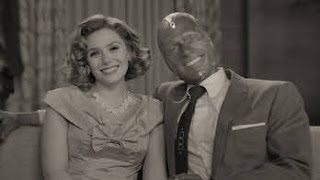 I have frequently credited Marvel for having faith in the strength of their characters and stories. Whereas rival DC Comics always focused primarily on their trinity of well known characters—Superman, Batman and Wonder Woman—believing that lesser or unknown characters would not attract an audience, Marvel built their movie universe on arguably B-list characters such as Iron Man and Captain America. Yes, Spider-Man and the Hulk eventually came into the fold, but they then continued their run with Thor, as well as characters with even lower profiles like Doctor Strange and Ant-Man, culminating with the Avenger films.

As a result, Marvel finds itself in the enviable position of having built a brand and level of trust that audiences will pretty much follow wherever the company takes them.

The Disney Plus streaming show, WandaVision, is a case in point. While audiences weren’t sure what to make of the first few episodes, which were basically homages to old TV shows like the Dick Van Dyke Show, Bewitched and the Brady Bunch (down to the opening credits and sets), Marvel patiently let the show play out before suddenly “opening up” the series and rewarding viewers by connecting it to the wider Marvel universe, bringing in minor characters previously introduced in earlier Marvel films like Thor and Ant-Man, and the more recent Captain Marvel. It’s said that WandaVision represents the start of the next phase of the Marvel universe (following Avengers: Endgame), so it’s exciting to see how the TV shows and films will begin to intertwine and further advance and enrich the world they’ve created. 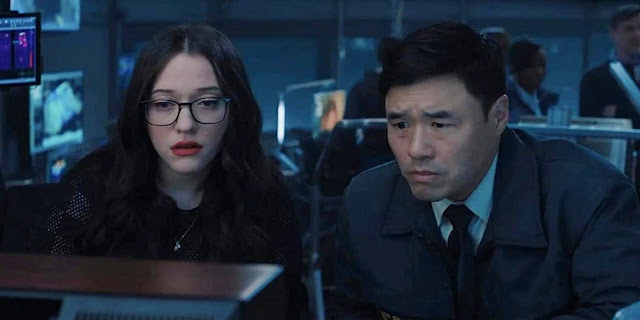