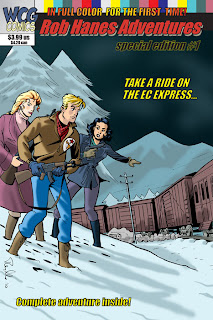 A full-color special edition issue of Rob Hanes Adventures will be available for the first time ever from WCG Comics in July 2010! (Cover pictured at right.)

The book will debut at the San Diego Comic-Con, scheduled from July 22–25, 2010, then will be available for sale at the WCG Comics website only. (WCG Comics will be at Booth K1 in the Small Press Pavilion of the Comic-Con.)

A preview of the issue is available here.

The color edition was made possible by long-time RHA fan Barry Gregory, co-founder of Ka-Blam Digital Printing and its sister storefront site, IndyPlanet. Although Barry is a long-time fan of the series and the classic black and white look that is the series’ signature style, he always wondered what it would look like in full color—so naturally he took it upon himself to color a story in its entirety, which was a complete surprise when he sent it to me!

Though the story featured in the special issue, “The EC Express,” originally appeared in Adventure Strip Digest #2, in full color the story looks fresh and new.

More details as we get closer to the San Diego Comic-Con!
at 6:58 AM Posted by Randy @ WCG Comics