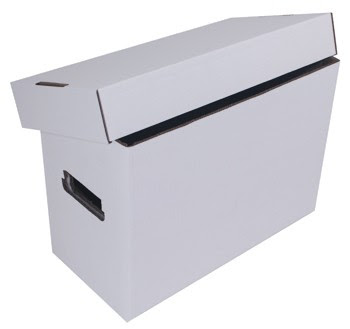 Like many people I did some much needed spring cleaning during the recent Memorial Day weekend. This year's spring cleaning finally led me to begin re-organizing and taking inventory of comics that have been sitting in storage in old Xerox boxes for years, if not decades, which I have lugged around with me from move to move.

While the process was not as time-consuming and arduous as I feared, I nevertheless have opened each box, sorted out and consolidated issues by series, re-packed them back into new comics storage boxes (as pictured at right), then carefully inventoried the contents of each box. I've always considered myself a reader, not a collector, so most of my comics are unbagged—over the years and as part of the current process, I've bagged some comics that I deemed valuable or that had some personal importance to me but for the most part the majority remain unbagged. (As one can imagine after so many years, some of the comics are no longer what one would consider "mint" condition!) 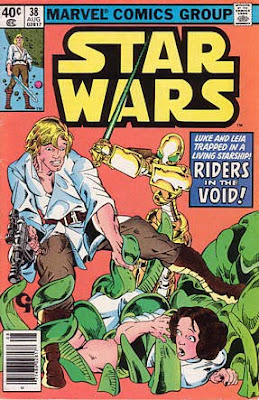 As I was recording the contents of each box, it occurred to me that I needed a database system that would enable me to sort my collection not just by box number (yes, I uniquely numbered each box for tracking purposes), but also by title so that, at some point, I could get a "big" picture of my collection and begin consolidating runs together—as a result of my haphazard storage of my comics, a lot of runs and series were spread out over several boxes. So one of the satisfactions of the process has been consolidating series together. I could have easily created a spreadsheet for this purpose, but decided to see what resources were available online for managing comic-book collections.

There are a lot of well known comic-book collection database systems—the most notable being a commercial desktop software program called Comicbase. You simply bring up an item in the database, specify you have it, and save to your user file. But being the cheapskate I am, after a quick Google search, I came across and settled on a comparable free online "cloud" application for organizing your comic-book collection called StashMyComics. The site has free registration, and all user database collections are stored at the site. However, you can also back up and download your "stash" to your computer as an Excel file, either in its entirety or by the user-defined categories. The categories function sold me on the site—I use the feature to organize my collection by box number. In Excel, it's a separate column that obviously allows me to sort my collection by category/box number if I wish. 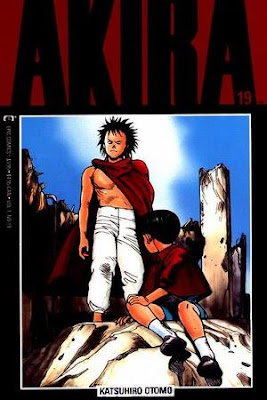 I must admit what also won me over was that I even found my own books, Rob Hanes Adventures, in the database!

Of course, such a program is only as good as its database. Since Comicbase is a commercial program with a subscription option, it has resources to keep its database updated, and it regularly does so for subscribers.

StashMyComics depends on an active user community to keep its listings up to date. For the most part, I have so far found StashMyComics to be fairly comprehensive, with about 95 percent or more of my collection in the system. (I created a separate spreadsheet for titles not in the system that I can merge with the master list if needed.)

I actually brought Rob Hanes Adventures up to date in the system and added cover images. This turned out to be a good test of the system because the turnaround for the images and the issue updates to make it into the system was only a few days!

Included with this post are some images of some of the books from my collection.

NEXT: An overview of my collection and my long term plan for it.
at 6:00 AM Posted by Randy @ WCG Comics

I'd think that with as much effort as went into working on the data you could have just finished organizing the comics themselves.

Prefer to do it in steps. I still have boxes to dig up, but I'd feel like I got more done if I was able to organize some of them and get them into the database, rather than have tried to organize everything then had to input everything! I suspect it will be a slow, gradual process.

It appears one would be better off moving into a tent given these photos. At least the sand would be part of the natural scenery and the rent would be free.

It appears one would be better off moving into a tent given these photos. Carpet Cleaning Vancouver At least the sand would be part of the natural scenery and the rent would be free.